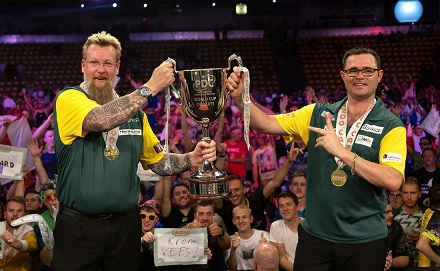 While at the WDF World Cup all nations which are members of the WDF can take part, the PDC World Cup can be played by all countries which have at least one player in the PDC Order of Merit.

2010, 2012
In 2010 it will be 24 countries which will be represented by two-player-teams - the two players who are ranked best in the Order of Merit. Should it be only one player the second will be invited.

The eight top teams - those are the eight teams which are the teams which the lowest sum of ranking positions - are seeded into the second round.

Teams 9 - 24 play in round one and the winning teams are drawn against the seeded teams.
Round two winners are divided into two groups and round three will be played in round robin. The round robin was only played in 2010. In 2012 the second round was changed to k.o. and the match winners progressed into the quarterfinals.

2014 - changed format
32 teams play in an knockout format. 16 teams are seeded and the other 16 unseeded. The unseeded teams are drawn against the seeded teams.
The first PDC World Cup was played from 3. - 5. November in the Raintown Meadows Arena in Houghton-le-Spring (South of Newcastle-upon-Tyne). The second World Cup will be played in February 2012 in Hamburg. World Cup number three will again played in Hamburg from 1. - 3. February 2013. 2015 The World Cup takes place in Frankfurt.
The tournament is televised on sky sport.