Dane Jann Hoffmann played the BDO Circuit from 1989 - 1994. In this time he two times took part in the BDO World Championship and 1990 and 1993 reached the last 16 of the tournament. In those years he played himself into the finals of several Open tournaments and was the number 1 in Denmark.
After a break due to illness he returned into the dart scene in 2006. 2010 and 2011 he played the PDC Europe tournaments on the continent. In 2012 he together with Michael Frydenthal and supported by the PDC founded the Scandinavian Circuit which is supposed to offer the Scandinavian top players more chances and by which they can qualify for the PDC World Championship. 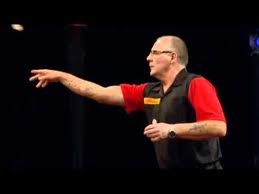 Jann, 1990 you appeared in the lime light with a sensational win over Bob Anderson in the first round of the BDO World Championship. Was that your first international success?

That was my first televised success. But I had won and been runner up in tournaments on the international scene before I played BDO World Championship.

How had you qualified for the World Championship?

I was qualified through the international rankings.

Where you the first player from Denmark who managed to qualify for the BDO World Championship?

No. The first one was Jan Larsen, and then followed by Finn Jensen. And then I came on the scene.

When did you start to play darts and how did you come in contact with the sport?

I started in 1977. But it was in the middle of the 80`s I started to play seriously. I got into contact with the sport through television. I saw Bristow v Lowe. And then I really started to play the game.

How popular was darts at that time in Denmark?

It wasn`t very popular in the beginning, but when we hosted the World Cup in 1987 it started to be very popular. But now it`s not so popular. We are working hard in SDC to make it popular again in Scandinavia.

Where you at that time (and during the following years) the number 1 in Denmark?

I have been No 1 in Denmark through the years.

Did there exist a Danish national team and were you a member? Playing in World Cups or Europe Cups?

Yes. There was a Danish National team, and I was playing on that for several years. As I recall, I have been playing 3 Europe Cups and 3 World Cups, and maybe about 10 Nordic Cups as well. I also represented Denmark in different international matches.

Why did you stop playing?

I stopped in 1995. I had problems with my heart, and had some operations. So I didn`t have the energy and health to keep on playing.

When you stopped playing in 1995 the split in darts had already happened - how did you experience the split and was the new founded PDC ever an option for you?

I knew the split was coming, and I was thinking about being a part of the PDC at that time.

Yes. Per Skau and me were asked to join it. But at that time the Danish Dart Organisation told us that we would be suspended if we joined it.

In 2006 you returned and started to play tournaments organised by the PDC Europe on the continent - what made you change your mind?

I started the Danish Dart Liga with Michael Frydendahl in 2005 following a dispute with the Danish Dart Organisation. And when it started to grow and I was beginning to play again, myself and Per Laursen started on the European scene. 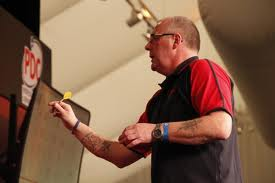 How difficult was it to play those European PDC tournaments - how competitive?

Very, very hard mate. When you are playing on the floor, the players are really super dart players.

Are the British players most dominant?

I would say yes. But you also have the Dutch and Australian players in the top.

How do you assess the chances of players from other European countries and which country do you think is closest to the standard of the UK players?

I think it must be the Dutch players.

What had changed in the meantime? Is the standard higher now-a-days?

I think the standard is much higher today. Nearly in every tournament there is a 9 dart finish. And the average of the players is very, very high.

Yes. The PDC has taken the dart sport up to high level. Not only because of the amount of tournaments, but also because of the super agreements they have got with the TV companies. And because of the professional officials who are working for PDC. They are really doing a great job.

What is your idea about sports science in darts? Do you think scientifically methods could be of use for the dart players?

I think it`s a difficult question. But it can help some players to improve their game. So it could be the future.

At the moment I'm on a lower level, and my practise isn't where it should be. But hopefully it will come again. And maybe I could use it.

Not as much as I should do. But I still love the game.

And what and how do you practice?

I am only practicing doubles.

How is the sport of darts organised in Denmark? Do there exist leagues?

We are playing tournaments in the Danish Dart League.

Where is darts played - in clubs or in pubs or bars?

Who's the number 1 today?

Do you think it would be possible for a Danish player to earn his living with darts?

Yes. If SDC is growing, I think we will have a Danish pro player in the future.

But you never earned your living with darts? What is your profession?

Is there any kind of youth promotion in Scandinavian countries - perhaps coaching or darts in schools?

No not yet. But maybe that will come in the future.

And what about women and darts in Denmark?

I honestly have no idea at all as I don't play the tournaments of the Danish Darts Organisation. I only play the DDL and SDC tournaments and in those only very few women take part.

Together with Michael Frydendahl you decided to found a Scandinavian circuit - how is the response?

It`s very good. Our first tournament had 88 entries. And we hope that will grow.

There never were many Scandinavian players taking part in the PDC Europe events nor on the PDC circuit - is it too expensive?

Yes. It was much too expensive. And after they changed the rules to participate it's even more difficult and expensive.

In which way the PDC supports the Scandinavian circuit? And will there be any PDC officials around during the tournaments or is it all in your hands?

The PDC are supporting SDC with some finance, and also with officials in the beginning. And hopefully we can run all the tournaments by our self very soon.

Which Scandinavian country do you feel has got the best players?

In the moment is must Sweden. Magnus Caris. But I think that Finland, Denmark and Norway are very close.

Do you think it ever will happen a Scandinavian player can turn professional?

Yes. We already have one. Magnus Caris.

Who will sponsor the Scandinavian tour and was it difficult to find a sponsor?

I think that the Scandinavian players which are qualifying for PDC World Championship now will be more ready than they were before. The main reason is the SDC tour, where they are under pressure in most of the games.

What is the stance of the national organisations in Scandinavia relating the Scandinavian tour?

In Denmark we don`t have major problems, but sometimes we disagree about a few things. How it`s working in the other Scandinavian countries, you have to ask them.

Do you think there will be consequences for players who decide to play the tour?

I don`t know mate. In Denmark there are no. And how it`s in the other countries, I really don`t know.

Will you yourself take part in the Scandinavian tour?

Yes. I will play them all.

And do you know of any other popular Scandinavian players who will take part?

All the top players of Scandinavia are playing.