The World Grand Prix was first hold in 1998 by the PDC.
Two years it was played in Rochester, Kent, then moved for one year to Rosslare in Ireland. Since 2001 it takes place in the Citywest hotel in Dublin. Since 2021 it is played in the Morningside Arena in Leicester-
From the beginning the tournament was played in October. 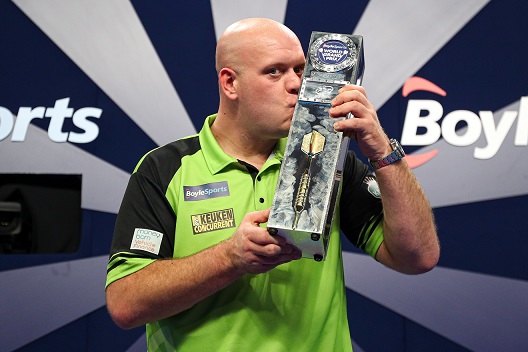 As the venue the sponsor changed several times over the years. First it was sponsored by the betting company Paddy Power, then by Sky bet, 2008 and 2009 by Sky Poker and 2010 by the online betting company Bogdog. 2019 the tournament is sponsered by Boyle Sports.

The dominating player of the tournament was Phil Taylor who won the title eight times though he as well was eliminated three times from the tournament first round.

The tournament is the only PDC tournament played in Double-In/Double-Out. With exception of the first year the format is sets and the first round matches are with Best of Three a very short format and often have a surprise in store. In the next rounds the format gets longer and longer: Best of Five Sets in Round Two, Best of Seven in the Quarterfinals, Best of Nine in the Semis and Best of Eleven in the Final.

The tournament is televised by Sky Sport.