Kirsty Hutchinson produced an outstanding performance to beat Rhian O'Sullivan 3-2 and reach the final of the 2022 WDF Women's Championship as the Boys' final was also determined at Lakeside. 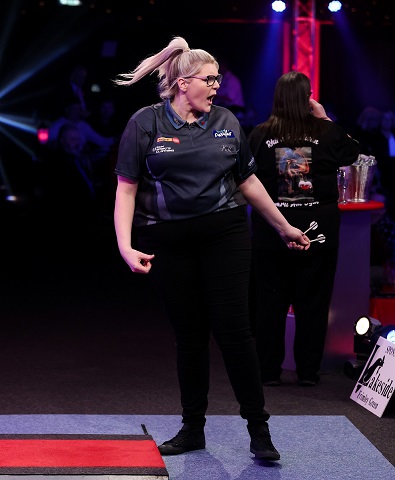 Hutchinson admitted that doubles were her biggest weakness following her scrappy quarter-final win over Priscilla Steenbergen but she was almost picture perfect in a high-quality first set, taking it 3-2.
The accuracy on the outer ring dipped for both players in the second set, Hutchinson missing darts to break the O'Sullivan throw in the first and third legs before capitalising in the fifth to take a 2-0 lead after the Welsh captain had missed four set darts herself.
O'Sullivan, a Lakeside finalist in her own right in 2010 and 2011, boasted the highest tournament average of any of the Women's semi-finalists coming into the game and she found her rhythm in the next two sets, hitting her first 180 of the match in the third as she took it 3-1 before producing finishes of 75 and 58 to win the fourth by the same margin and level the tie.
The first three legs of the deciding set went with throw, Hutchinson ekeing out a 2-1 lead after O'Sullivan missed a dart at tops to break her in the third. The fourth saw Hutchinson throw her first 180 of the week before missing the bull for a 135 finish in her next visit that would probably have ranked as the best finish of the tournament. O'Sullivan held her nerve, cleaning up 60 with a double-double finish to force a sudden death leg.
Hutchinson missed another match dart, this time at tops for a 105, but O'Sullivan could only score 40 after leaving herself on 96. The reigning Welsh Open champion made sure of victory with her third shot though, hitting double 10 to seal a final appearance on her Lakeside debut. 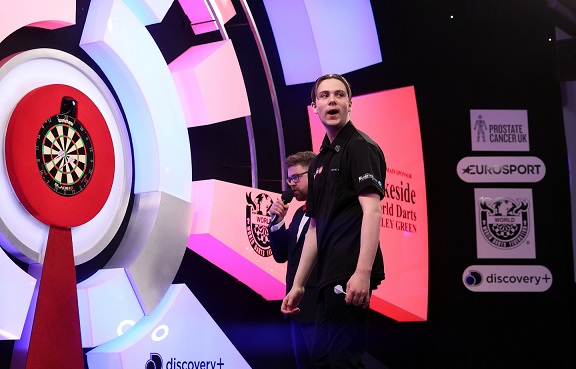 Having won it in 2019 and been runner-up in 2020, Leighton Bennett was the hot favourite for this year's Boys' World Championship. He found Charlie Large too much to handle, though, missing two match darts before losing 2-1 in the first semi-final.
Bennett started the game in typically confident fashion, giving a big celebration to the crowd after his first of four 180s during the game. It was Large, who was making his TV debut, that drew first blood though, taking out finishes of 112 and 127 before surviving a set dart at the bull to win the opener 3-2.
'Boom Boom' showed more of what he can do in the second set, winning it 3-0, before opening the decider with a sensational 148 checkout. Both players struggled with double trouble in the third set, Large taking a pair of scrappy legs to go 2-1 up before Bennett broke back with a 16-darter to take it all the way. 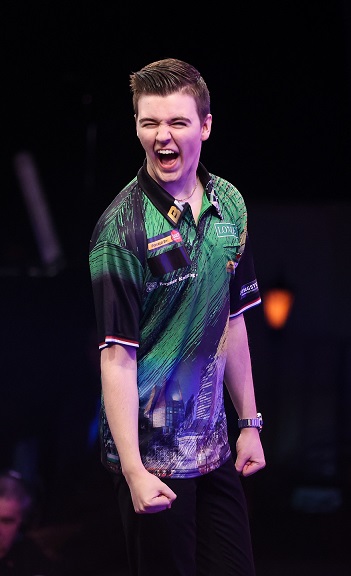 It was in that sudden death leg that Bennett had two match darts, first at the bull and the second at double three, before Large stepped in to take out 39 in two to seal an impressive victory.

Facing Large in tomorrow's final will be Dutch thrower Bradly Roes, who was far from his best but had more than enough in the tank to record a routine 2-0 victory over Luis Liptow.
Germany's Liptow, who doesn't turn 16 until Monday, took the opening leg of both sets before Roes produced a pair of three leg bursts to seal victory.

Thibault Tricole and Neil Duff became the first players from their respective countries to reach a World Championship final on a night that also saw Beau Greaves make more history as the youngest-ever player to book a finals place. 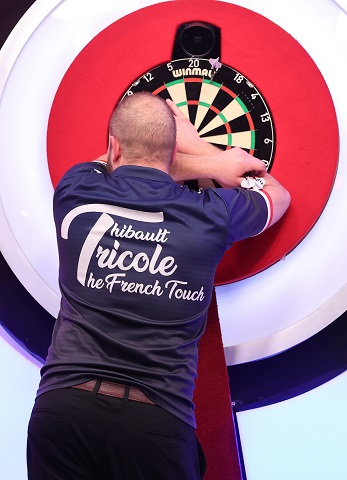 Cameron Menzies, the last PDC Tour Card holder left in the competition, had only dropped one set in his first three matches but soon found himself 2-0 down against Tricole, the Frenchman averaging a shade under 97 as he won the first two sets 3-2.
The third set also went the distance, Tricole and Menzies exchanging breaks of throw before the Scot produced a brilliant 112 finish to take it. They went into the second break level, Menzies winning the fourth set 3-1, before the Frenchman began to reassert his dominance and pull clear.
A slew of missed doubles to keep the set alive from Menzies saw 'The French Touch' wrap up the fifth set 3-1, before he held his nerve to take the sixth 3-2 on throw. Menzies battled back again to level the match at 4-4, taking set seven 3-1 before he capitalised on five missed match darts from Tricole to take a nervy eighth 3-2.
Losing that eighth set initially seemed to take the wind out of Tricole, who was against the darts in the final set and soon found himself in the unfamiliar position of being behind after Menzies started it with a 16-darter. He found a second wind though, a brace of 14-darters giving him the break he needed to throw for the match. Tricole, who'd survived match darts from both Shawn Burt and Andy Baetens earlier in the tournament, missed another six to book his final spot before finally hitting double one to seal an emotional victory.
Opposite him in the final will be Neil Duff, who continued his impressive march through the field with a 5-2 win over Richard Veenstra. 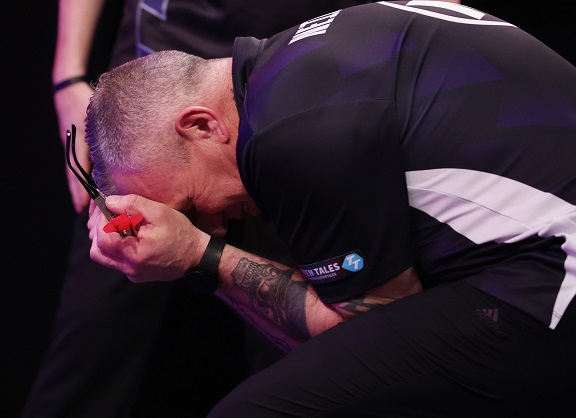 Veenstra, playing in his second Lakeside semi-final, had been in blistering form earlier in the week, wiring double 12 for a nine-darter in his victory over top seed Brian Raman and breaking the tournament record average in his Last 16 win over Luke Littler.
The Dutchman continued in that vein, starting the match with a 13-dart break of throw, but it was Duff who won three legs on the spin to take the first set. Veenstra won the following set 3-0 to level the scores going into the first break and the tie remained all-square when they went off for the second break, Duff going 2-1 up before 'Flyers' pegged him back by taking the fourth set.
After that second break, though, it was all about 'The Duffman' with Veenstra only winning another two legs in the match. The seemingly deciding moment came at the end of the sixth set, Duff nicking it in a deciding leg with an 81 checkout to lead 4-2. With throw in the seventh, Duff wrapped up a convincing victory with a minimum of fuss, winning it 3-0 in 42 darts. Duff, who came from 3-0 down and survived match darts to beat Jim McEwan earlier in the week, finished with a 93.75 average. 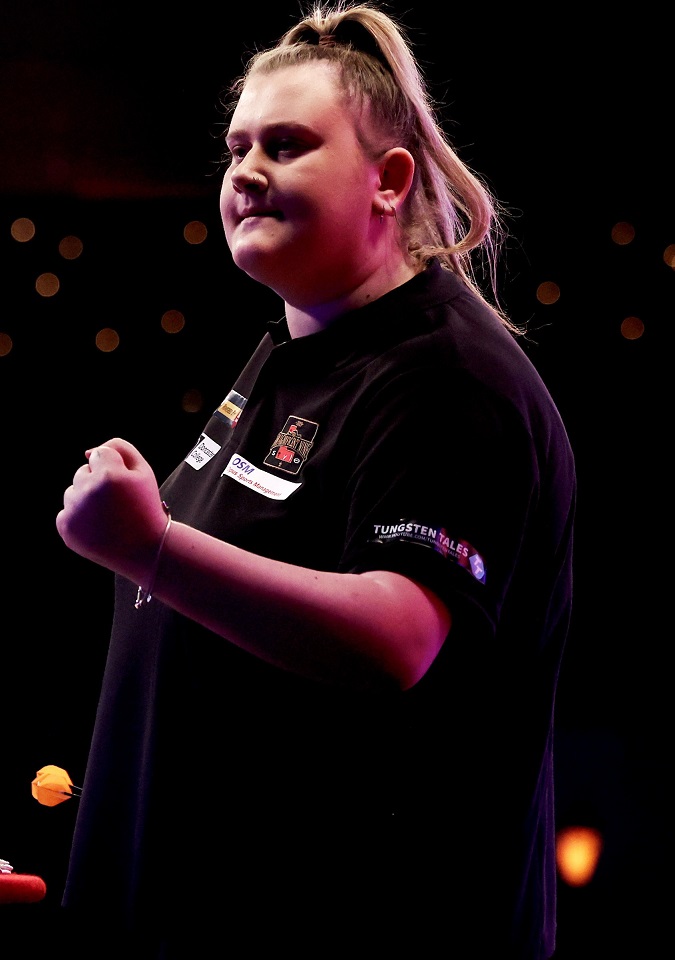 Lorraine Winstanley entered her third Lakeside semi-final hoping to make the World Championship final for a second time but she simply had no answer for Beau Greaves, who won 3-0 to break Fallon Sherrock's record as the youngest Women's World Championship finalist in history.
Starting the match with an 86 checkout, Greaves raced into a two-set lead without dropping a single leg. Winstanley didn't sink without a trace, breaking the Greaves throw twice in set three to force a deciding leg but she couldn't see it out. Instead it was Greaves who sealed a straight-sets victory with a 15-darter that included her second 180 of the match.
Greaves will meet Kirsty Hutchinson tomorrow in the first all-English final since 2016 when Kirsty's hero Trina Gulliver won her 10th world title against Deta Hedman.