Neil Duff defeated Nick Fullwell to book his spot in the quarter-finals of the Men's WDF World Championship as Beau Greaves battled past Hungary's Veronika Ihasz in her Lakeside debut. 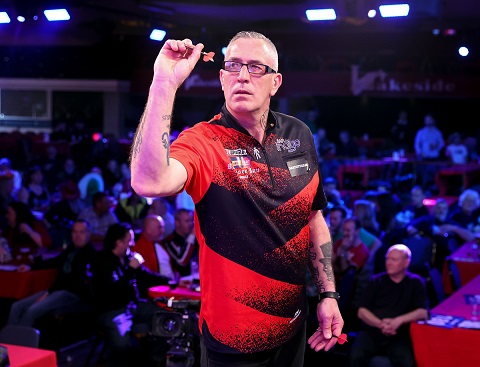 Duff said prior to the game that going up against a PDC Tour Card holder in Fullwell would give him extra motivation and that showed as he took the first two sets.
Both players started slowly but Duff who emerged in front, the Northern Ireland international capitalising on some missed doubles from Fullwell to take the opener 3-1. He produced a repeat performance in the second, big finishes of 96 and 100 moving him within three legs of a place in the last eight.
Fullwell, who finished the game with five maximums, finally got on the board in the third set, breaking the Duff throw in the third leg before keeping his nerve to hold throw and take it 3-1. The fourth also finished 3-1, Duff securing the all-important break in the opening leg before seeing it out with an impressive 14-darter.
Next for 'The Duffman' is Jim McEwan, who was unable to match the level he produced in the previous two rounds but still had enough to get past Wales' Mike Warburton. 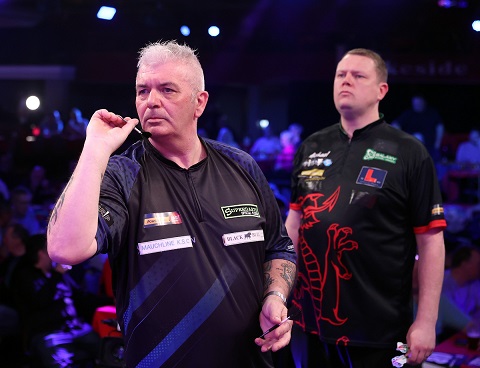 After struggling to find his range in the first leg, McEwan reeled off three in 48 darts to take the first set 3-1.
That seemed to light a fire under 'Warby', who went through the gears to win the next six legs on the spin to move 2-1 up in sets and within three legs of victory. The key moment arguably came in the third leg of the fourth set. With it poised at 1-1, a break of throw for Warburton would have given him the chance to throw for the match. He missed a clutch of doubles though and McEwan eventually capitalised to lead himself before winning the set with a 14-darter.
Set five was all 'Chucky', the reigning British Classic champion opening out with a 118 finish and sealing victory with a sensational 11-darter that included his seventh 180 of the match. 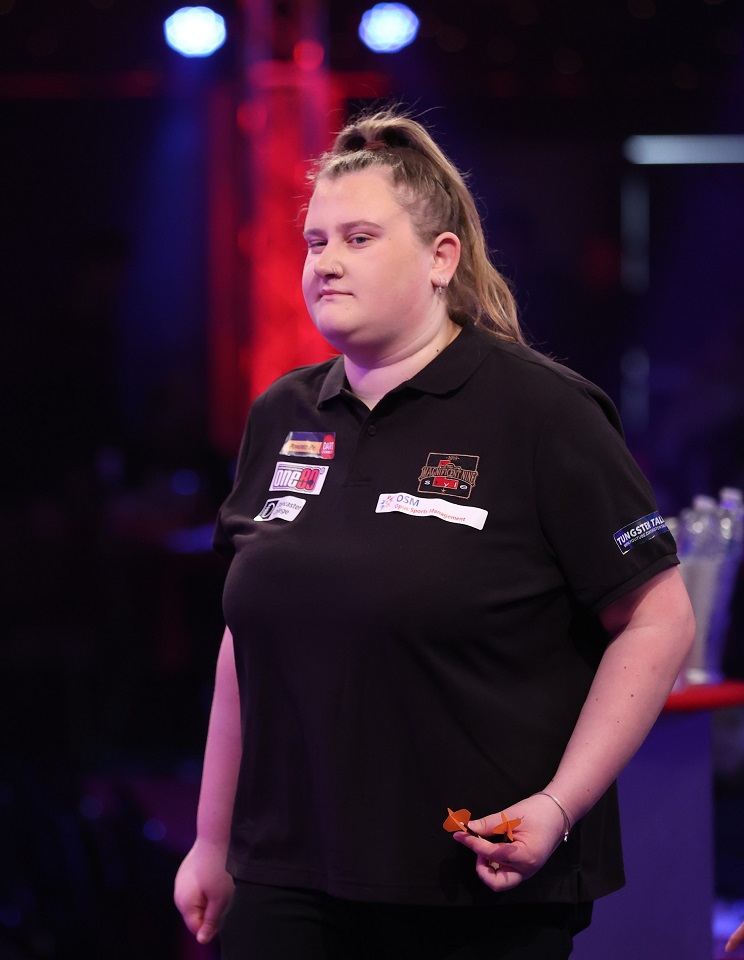 Despite never having played at Lakeside in a World Championship before, Doncaster teenager Beau Greaves' recent triple title haul in the Isle of Man made her the betting favourite this year. She had to work hard for it but she made a winning start after seeing off the spirited challenge of Hungary's Veronika Ihasz.
New England call-up Greaves sprung out of the traps, winning the opening two legs in 18 darts each before squandering three set darts to wrap up the set. Ihasz, who beat Paula Murphy 2-0 in her Lakeside debut, capitalised, winning the third leg with a 73 finish before breaking Ann-Louise Peters' checkout record in the Women's World Championship in the fourth with a sensational 164.
Greaves produced another 18-darter to win the first set and then found herself 2-0 up once more in the third thanks to a great 109 out. Ihasz fought back again though and this time won the set, albeit surviving three match darts to do so. Ihasz wired double 15 for a break in the third leg of the deciding set and that miss was punished, Greaves holding with an 18-darter before producing a break of her own with another 18-darter. 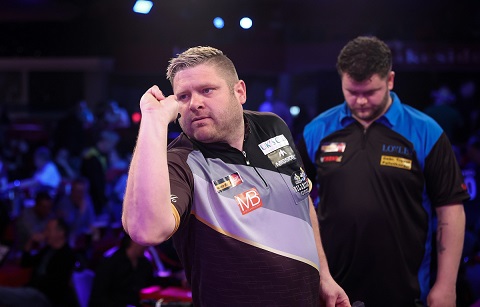 In the final game of the session, WDF No.1 James Hurrell booked his quarter-final place with a routine 3-0 victory over Ryan de Vreede.
In stark contrast to his opening game with John Desreumaux, Hurrell's finishing was on point throughout and that ultimately made the difference against de Vreede. After dropping the first leg of the match, Hurrell won three on the spin, punctuated by a brilliant 126 finish on the bull, to take the opening set.
The pair exchanged breaks in the second set to force a deciding leg, with Hurrell taking out 40 with the third dart in hand after de Vreede had pulled a shot at tops for the set low.
Just as he did in the first two sets, de Vreede won the opening leg of the third but again couldn't convert when given opportunities at doubles. Hurrell could though, winning three on the spin in 47 darts to complete a straight-sets victory with an 89.87 average.

Cameron Menzies and Aileen de Graaf ended the title reigns of Wayne Warren and Minoru Suzuki on an evening that saw the quarter-final line-ups confirmed in the Men's and Women's WDF World Championships at Lakeside. 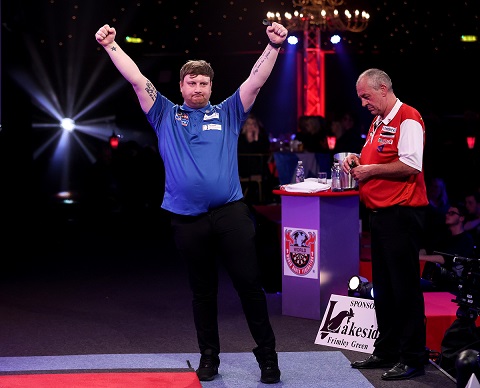 The opening set of Menzies' game with Warren set the tone for rest of the game, Warren missing countless doubles and his Scottish opponent swooping in to capitalise.
Warren spurned 15 shots at a double in the first two legs alone as Menzies netted an early break. Although 'Yank' then held throw with an 18-dart leg, it was the Scot who took the set with a 13-darter. A 12-darter gave Warren an ideal start to the second set but the doubles were his undoing once again, the 2020 World Champion missing seven darts to make it 2-2 before Menzies hit tops to win it 3-1.
The third set went all the way with every leg going against the throw, Menzies sealing a straight-sets victory with another 14-darter. The Welshman finished with just an 11.1% success rate on the doubles. The Scot, meanwhile, who averaged 87.35, will face the WDF No.1 James Hurrell in the quarters tomorrow. 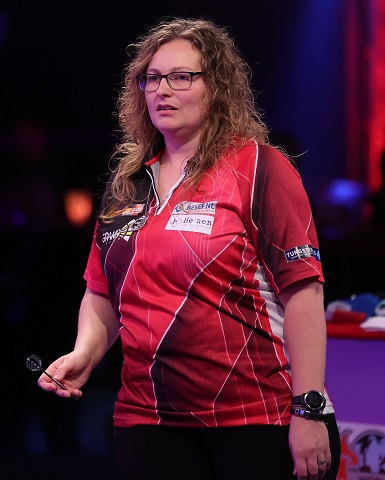 Aileen de Graaf is now one game away from her third World Championship semi-final after coming from behind to defeat two-time champion Mikuru Suzuki 2-1.
Japanese ace Suzuki began the game well, scoring strongly and taking the first set 3-1 fairly comfortably. The break after that set seemed to affect her, though, as she didn't win another leg.
For her part, de Graaf's scoring improved considerably and she was the more clinical player on the doubles as she won sets two and three 3-0. The former World Master will face Beau Greaves in the quarter-finals tomorrow afternoon. 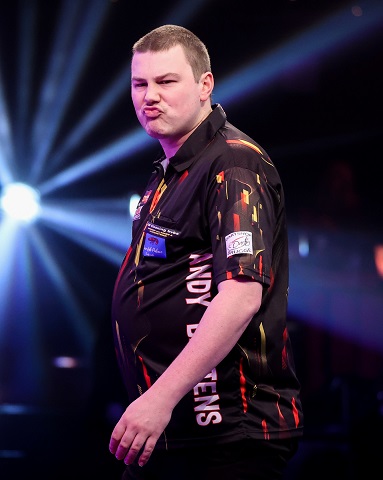 Andy Baetens showed himself to be a real contender for this year's World Championship in his Last 16 meeting with Scott Marsh, throwing seven maximums and recording a 102.79 average, the third highest in Lakeside history, in a dominant 3-0 victory.
Marsh won the opening leg of the match on throw before Baetens won five on the spin to wrap up the first set and build a 2-0 lead in the second. The Englishman drew level in the second set with a sensational 121 finish but he couldn't level it in terms of sets, Baetens taking out 69 for another 14-darter. The third was a relative breeze for 'The Beast', winning it 3-0 in 40 darts to wrap up a straight-sets victory.
Marsh did nothing wrong, producing the highest losing average of the tournament, but he just couldn't keep up with the relentless power scoring and clinical finishing of the Belgian.
Baetens' opponent in the quarter-finals will be France's Thibault Tricole, who also impressed as he ended Steve Hine's World Championship campaign with a 3-1 win. 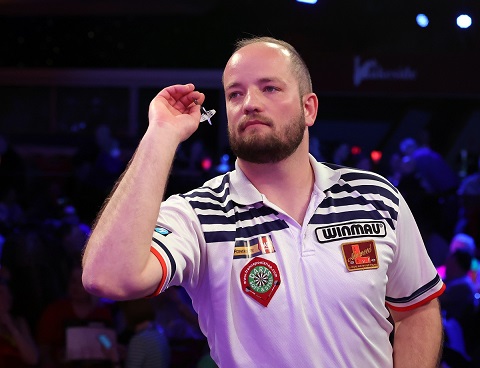 Hine hadn't dropped a set in his opening two wins over Kevin Luke and Leonard Gates and began this tie in similar fashion, starting the match with a 109 out before wrapping up the opener 3-2 with a 70 checkout on double 16.
He couldn't continue that streak in the second, though, Tricole taking out 116 en route to winning it 3-0. The Frenchman extended his lead by winning a high-class third set 3-1, producing finishes of 120 and 104 in response to a sensational 142 from Hine.
Hine had chances to win the fourth, breaking the Tricole throw in the third leg before wiring darts at a double in the next two legs. 'The French Touch' capitalised, taking the two in a combined 34 darts to seal a 3-1 victory.