Michael Smith triumphed on Night 16 of the Cazoo Premier League in Newcastle on Thursday, as Joe Cullen defeated World Champion Peter Wright to seal his place at next month's Play-Offs. 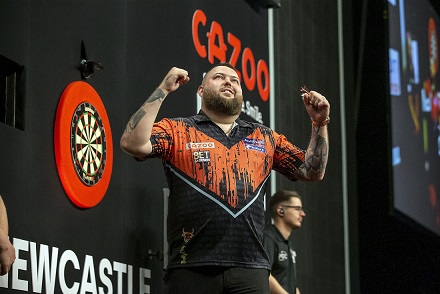 Smith was the only player in this year's event without a night win to his name ahead of the trip to Tyneside, but the World Championship runner-up rectified that with victory on the final night of league phase action.
Smith recorded impressive wins over Michael van Gerwen and Gerwyn Price at the Utilita Arena, before defying a late fightback from Jonny Clayton to scoop the 10,000 pound winner's bonus.

"To finally get that win and get over the line was massive tonight. Sadly I didn't make the top four, but I ended on a high and a positive," said Smith. "It was only me on zero wins in the Premier League, so I was playing for that, and luckily enough I fell over the line against Jonny."

The St Helen's star had dumped out Van Gerwen in the quarter-finals for a second straight week, before easing past an out-of-sorts Price, who overcame James Wade earlier in the evening. Smith saved his best performance of the night until last, averaging 98 and converting 67% of his attempts at double to leapfrog Price and secure a sixth-place finish.
The 31-year-old made a blistering start to the Night 16 showpiece, following up an early break of throw with legs of 13 and 12 darts to establish a commanding 3-0 cushion. The world number four extended his lead to 4-0, before Clayton reeled off three successive legs of his own to threaten an unlikely comeback. Smith then halted Clayton's charge with a fourth 180 and a 13-darter to move to the cusp of victory, before sealing the deal with a classy 112 checkout, to ensure all eight players ended the campaign with at least one night win to their name. 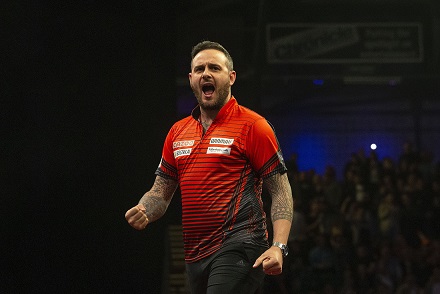 However, Cullen and Wright's blockbuster showdown was the headline act in Newcastle, with the winner assured of a coveted top four spot. The pair were locked on 22 points ahead of Thursday's clash, but it was Cullen who came out on top in an enthralling affair to cap off a fine debut season. The Masters champion prevailed on Night 15 in London to move above Wright in the table, and he maintained his fine form to deny the world number one a third Play-Off appearance.
Both players were imperious on the outer ring, with Cullen converting all six of his attempts at double 16 - including a clinical 105 kill in the penultimate leg, with Wright sat on a double after nine darts. Despite this, Cullen was forced to settle for a fourth-place finish after succumbing to table-topper Clayton in the last four, in a repeat of last week's final. The Welshman fought back from 4-2 down to defeat Gary Anderson in the evening's curtain-raiser, defying a 101 average from the spirited Scot to prevail in a deciding leg. The reigning Premier League champion then recovered from 3-1 adrift to topple Cullen and reach his eighth final of the season.

The Cazoo Premier League roadshow now heads to the Mercedes-Benz Arena in Berlin for the Play-Offs on June 13, with Clayton bidding to retain his title. The 47-year-old will face Cullen in the opening semi-final, before former champions Van Gerwen and Wade collide - having finished second and third respectively.

The Cazoo Premier League is being broadcast live on Sky Sports in the UK, through the PDC's worldwide broadcast partners including DAZN and Viaplay, and on PDCTV for Rest of the World Subscribers (excluding UK, Ireland, Germany, Austria & Switzerland).