Gerwyn Price defeated Michael van Gerwen 6-5 in the final of Cazoo Premier League Night 15 in Sheffield to gain ground in the Play-Off race. 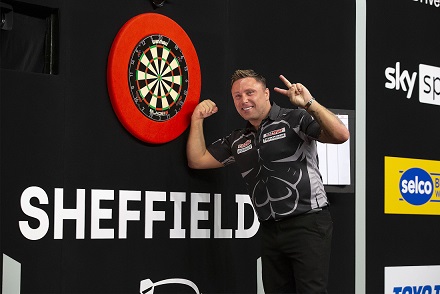 Price returned to form at the Utilita Arena, producing back-to-back 100 averages to reach the final for the first time since Night Three in Belfast, when he landed two nine-dart finishes on the way to victory.
The Welshman pocketed the 10,000 pound winner's bonus in Sheffield and picks up a crucial five league points, which move him up to fifth place, just two points adrift of Peter Wright in the final Play-Off place.

"I don't think I was at my best today but I'm happy to win," Price reflected. "The last couple of weeks I've been under the cosh and not playing well. "I was under a lot of pressure tonight; I knew I needed to win two of the last three nights to make the Play-Offs. "I know I'm in with a shout and if I win next week I'm back in the Play-Off places - as long as I get there I will be happy."

Van Gerwen made the early running in the final, taking leads of 3-1 and 4-2, but after the Dutchman missed four darts at double 12 for a 5-3 lead, Price pinned a key double two with his last dart in hand to level. Van Gerwen produced a showpiece shot on 95 - hitting a single 19 and two double 19s - to send the contest to a deciding leg but Price held his nerve on throw with a 14-dart leg to seal a vital win.

Price's night began with a 6-4 quarter-final victory over Gary Anderson, before he saw off Joe Cullen 6-3 in the semi-finals.

"I enjoyed the final but in the first two games I was under pressure," Price added. "Once I beat Gary and Joe, things probably came a little bit easier for me. "I knew I needed to win the first game against Gary, and against Joe I knew he would be cold having had a bye in the first round, and I just needed to get into him a little bit. "To produce 100+ averages in my first two games when the pressure was on and find some of my best darts was good, but there's a lot more in the tank. "I got the five points, 10,000 pound and the main thing is I'm still in with a chance of winning this tournament." 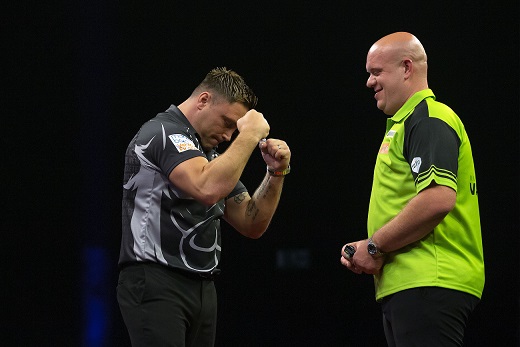 Van Gerwen picked up three league points with a third runner-up finish in four weeks thanks to victories over Wright and Michael Smith to join Jonny Clayton in securing qualification for the Play-Offs with two league phase nights to spare.

Losing semi-finalists Cullen and Smith leave Yorkshire with two points each, with the latter surviving seven missed match darts against league leader Jonny Clayton as he came from 5-2 down to win in a decider.

The Cazoo Premier League roadshow heads to The O2 in London on Thursday May 19 for Night 15 of the league phase, as Price looks to maintain his Play-Off push against fellow-countryman Clayton. The night's other quarter-finals will see Van Gerwen play Smith, Cullen face Anderson and Wright take on James Wade, who missed the night in Sheffield due to illness.