Wright vows to stop 'stupid' tinkering ahead of crucial period

Peter Wright believes a return to his World Championship winning darts will see him recapture his form as the Premier League Play-Off race continues in Aberdeen on Thursday. 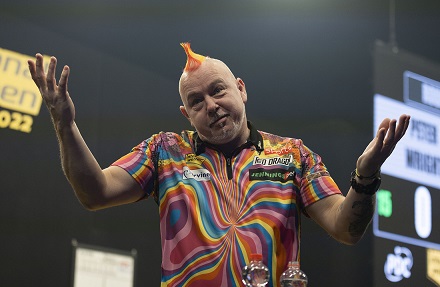 The P&J Live will host Night 11 on Thursday, with Wright currently occupying one of the four Play-Off places in fourth. However, the Scot has been left looking over his shoulder at the chasing pack, having failed to win a league phase night since Night One in Cardiff.
Wright has also endured an unusually barren spell on the ProTour - his last title coming in early February - but the world number one insists he knows what is needed to change his fortunes.

"When I flew in from Munich this week I told myself to stop mucking around with all these darts," said Wright. "I'm fed up with giving people chances. "I've been switching my darts stupidly, that's why the results have been up and down. "One minute I'm averaging over a ton and the next second in the same night I'm averaging 80 - that lack of consistency doesn't win you games. "Now is the time to knuckle down and use the gold ones [darts] and blow everyone off the board. "I've got some important stuff coming up; there's not many weeks left in the Premier League to qualify for the Play-Offs and be on form for New York that's coming up. "There's also the World Cup and I need to make sure I'm playing well so John [Henderson] doesn't need to carry me!"
Wright, who brought the World Cup home to Scotland for a second time in 2021 alongside John Henderson, is sure of a warm welcome to the stage as he takes on Play-Off rival Joe Cullen in a crucial quarter-final tie.
"It's great to have a homecoming as World Champion and world number one," Wright continued. "I think it will be pretty special this time in Aberdeen now that the fans are a bit more used to the venue. "Joe is full of confidence but I'm out there to win, that's my job. I think I will win that game and the whole night." 
The quarter-finals will also see Scottish legend Gary Anderson looking to lift himself off the foot of the table as he takes on second-placed Jonny Clayton. Night Ten winner James Wade begins his quest for back-to-back night wins against Michael Smith, who is in need of points to drag himself into the Play-Off race. League leader Michael van Gerwen and Gerwyn Price will meet in a mouth-watering tie, with Price, like Smith and Anderson, also looking to avoid being cut adrift from the Play-Off picture.