Gerwyn Price has changed his walk-on music as he embarks on a Play-Off push in the second half of the Cazoo Premier League season. 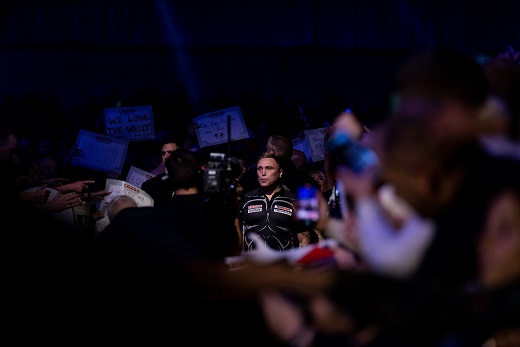 Price will walk on to Katy Perry's 'Roar' at the AO Arena stage in Manchester on Thursday as he takes on Peter Wright in a crucial Premier League clash. Ahead of the new track's debut on Night Ten, the Welshman revealed the inspiration for the new track came from a family outing.

"I was just driving home with the family after we'd been out for a meal in Cardiff and 'Roar' came on," Price explained. "We were all singing along to it and I liked the beat of the music, so I thought 'why not make the change?' "I listened to the lyrics and I think they suit me and my game, hopefully it can give me a good fresh start in the Premier League."
Price currently lies in sixth place in the Premier League, four points adrift of the top four Play-Off places after a hit and miss first half of the campaign.
"We're only half-way through the season and nobody has been stand-out," continued Price, who hit two nine-dart finishes in one night in Belfast. "It's the second half of the season now so it's time for me to kick on and reach the Play-Offs, which I'm confident of doing,. "It will only take a couple of night wins to move into the top four. "My form is coming back and I'm feeling confident in how I'm playing. "My wrist injury only has two more weeks to go, which I'm looking forward to being fully healed so I can get back to playing every week."

The other quarter-finals in Manchester will see Michael van Gerwen take on Jonny Clayton, while Gary Anderson is set to take on James Wade and Joe Cullen plays Michael Smith.