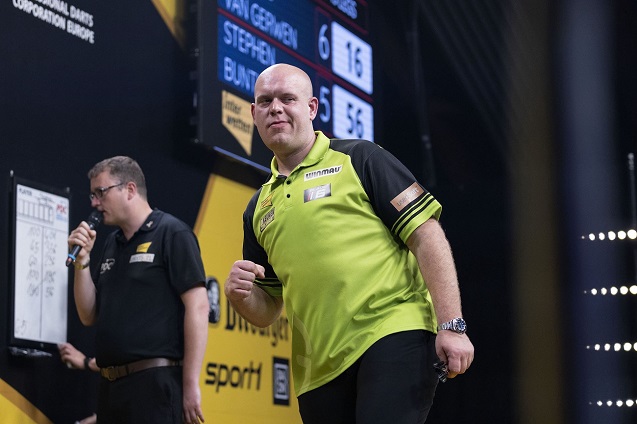 The Dutchman has already been victorious in Hildesheim and Graz this year - claiming the Austrian Darts Open title last weekend - and collected his 35th European Tour success in style.
Van Gerwen had seen off Daryl Gurney on Saturday, and overcame Cazoo Premier League rival Jonny Clayton in the third round to begin a superb day at the Ostermann-Arena. He then prevailed in a decider against Dirk van Duijvenbode, who was punished for missing match darts in the last two legs of their quarter-final. Van Gerwen gained revenge over Luke Humphries in the semi-finals for a defeat to the former World Youth Champion in the recent German Darts Grand Prix, averaging over 105 in a 7-2 win.
He then held off Van den Bergh's challenge - in the Belgian's bid for a first European Tour title - to scoop the 25,000 Pound top prize and claim a third successive Leverkusen win.

An exciting final began as Van den Bergh broke with a 13-darter, but Van Gerwen replied in kind to level and also added an 11-darter as he moved 3-1 up. Van den Bergh hit back to level at three-all and responded to a superb 164 checkout from Van Gerwen to take out 80 in leg eight. Van Gerwen, though, found another gear to pull clear, hitting six perfect darts in a 12-darter in leg nine and then finding double four to move 6-4 up. Three missed doubles allowed Van den Bergh in to win leg 11, but the Belgian then paid for missing two darts to level the tie as Van Gerwen posted double ten to restore his two-leg lead and double eight to seal the title.

"It was really hard and I'm glad I won," said Van Gerwen, who averaged 102.49 in the final. "Dimitri is a phenomenal player, he always pushes me and he's a good player and a good guy. Sometimes he's a bit naive but I like him, and I think he's good for darts. "The crowd today were phenomenal and I can't wish for anything more. It's always amazing in Leverkusen." 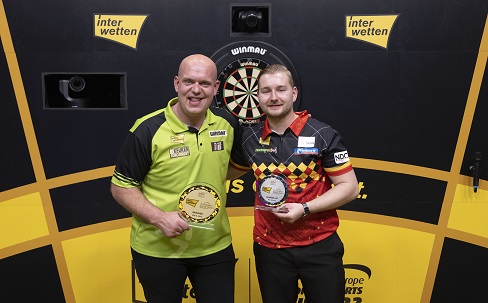 Van den Bergh ended German hopes in the event with a 6:4 third round win over Martin Schindler, and finished six doubles from seven attempts in a brilliant 6-1 quarter-final win over Josh Rock. He was then given a bye into his first European Tour final after James Wade withdrew ahead of their semi-final through illness.
Wade had produced some superb form throughout the weekend, and defeated Jose de Sousa and Ryan Searle on Sunday.
Humphries overcame Brendan Dolan in the third round and then averaged almost 108 to see off Nathan Aspinall in the quarter-finals, before Van Gerwen ended his bid for a second European Tour title.
Northern Irish prospect Rock saw off Scott Williams in the third round to reach his first European Tour quarter-final, ending an impressive weekend.

The PDC European Tour continues from May 13-15 with the Gambrinus Czech Darts Open in Prague. Coverage will be streamed through DAZN in Germany, Austria & Switzerland and via PDCTV in all other territories.