Michael van Gerwen tasted victory for the first time on the PDC European Tour since 2019 with a superb comeback win over Rob Cross in Sunday's Interwetten German Darts Championship final. 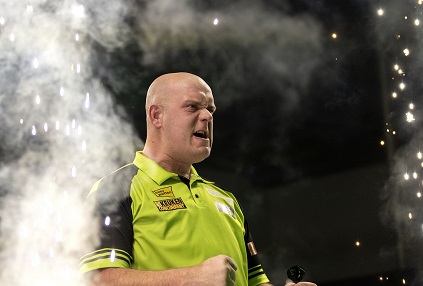 The Dutchman followed up back-to-back Cazoo Premier League wins in Exeter and Brighton with his first ranking title of 2022 in style at Halle 39 in Hildesheim. Van Gerwen's last of 32 previous European Tour successes had come in Graz in 2019, but he showed his class to scoop the 25,000 pound title with an 8-5 success over Cross.
That included a spirited fightback in the final after Cross opened up leads of 2-0 and 4-1, with Van Gerwen producing legs of 12, 13 and 12 darts to level. Cross took out 121 to move back ahead in leg nine, but Van Gerwen levelled and capitalised on a miss from his rival at tops to break for a 6-5 lead, before legs of 11 and 14 darts wrapped up the title.

"I've been working for this for a really long time and it means a lot to me," said Van Gerwen, who returns to third on the PDC Order of Merit following the win. "To win a [European Tour] tournament again feels absolutely phenomenal. I keep fighting and I never give up. I'm not done yet! "Everyone knows I love to play tournaments in Germany - the crowds have been absolutely fantastic, and it means the world." Van Gerwen survived three missed match darts from Dimitri Van den Bergh at the end of their dramatic semi-final, before pinning double 18 to complete a 13-darter in their deciding leg. He had benefitted from a bye in the quarter-finals following the withdrawal of Peter Wright due to a back problem following the world number one's third round defeat of Krzysztof Ratajski. Van Gerwen had, though, seen off Martin Lukeman 6-4 in the last 16 to follow up Saturday's opening victory over Jose Justicia.

Cross had to produce a rousing comeback from 4-2 down in his quarter-final with Karel Sedlacek, reeling off four straight legs to keep his hopes of Hildesheim glory alive. He subsequently averaged 100 in his 7-4 semi-final defeat of Daryl Gurney to follow up an earlier 99 average in a 6-3 third round win over Dirk van Duijvenbode. However, the European Championship winner fell just short of finally claiming a European Tour title, but said:
"Michael played great and I missed my chances. "He took them and that's what he used to do. I'm happy for him that he got over the line; he's winning and working hard and I've been in the same boat. "It's nice to see him back a little bit, and hopefully I can keep improving for the future."

Premier League duo Michael Smith and Jonny Clayton joined Sedlacek in losing out at the quarter-final stage, while Van den Bergh's wait to reach a European Tour final continues following his narrow semi-final defeat.
Smith had averaged over 108 in his brilliant 6-1 third round win over Dave Chisnall, while Czech ace Sedlacek finished six doubles from 11 attempts in his 6-4 defeat of Jose de Sousa to reach his first European Tour quarter-final for three years.

The PDC European Tour returns with the Interwetten German Darts Grand Prix from April 16-18 in Munich, which will be streamed through PDCTV and exclusively in Germany, Austria & Switzerland via DAZN.