Rob Cross was eliminated from the Unibet Premier League in Wednesday's Night Eight as Peter Wright and James Wade secured their spots in the second half of the season. 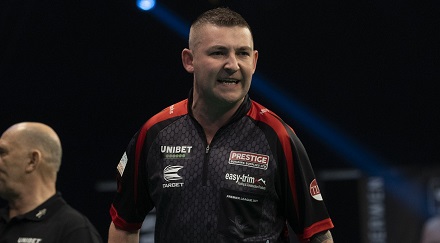 Cross will join reigning champion Glen Durrant in exiting the event after Thursday's Night Nine in Milton Keynes after he suffered a 7-5 loss to Nathan Aspinall. Later wins for Wade and Wright mean that Cross is now three points adrift with just one game left before the bottom two stars are eliminated, with the 2018 finalist set to finish ninth for a second successive year.
He held his own in the early stages against Aspinall, who turned the match with a 146 checkout to break throw in leg five as five straight legs moved him 6-2 up. Cross battled back to 6-5 as he took the tie all the way, but Aspinall held his nerve to secure his own fourth win of the season.

"It was a big two points for me and I'm very happy, considering it was an under-par performance," said Aspinall, who remains joint-second on 11 points. "I know Rob was under pressure and had to win tonight. "I needed to win too to get some daylight from the rest of the guys, so I'm happy to have taken three points from four in the last two nights. "When I went 6-2 up I took my foot off the gas, I thought I'd already won. You can't think like that and it's something I'm trying to learn." 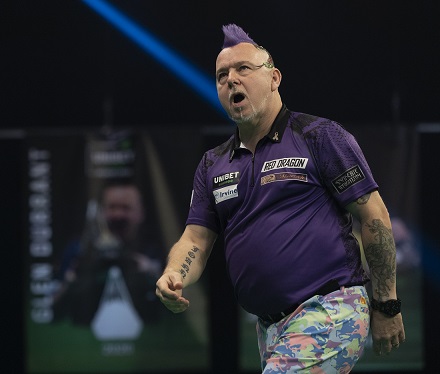 Wright ensured his own survival with a 7-1 win over Durrant, who went down to an eighth straight loss despite posting a season-high 121 checkout.

"I knew I had to win this game and I was nervous," said Wright, who landed a 156 checkout in the tie. "It's really hard playing Glen, to see him struggling like that. "In the last two games there were glimpses of the old Glen but tonight he didn't perform." 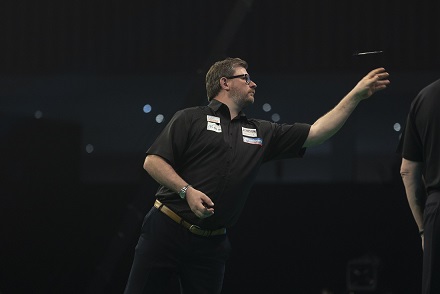 UK Open champion Wade also booked his spot in the second half of the season, producing a third successive ton-plus average as he overcame Jonny Clayton 7-2. The 2009 Premier League winner led 3-0 before Clayton won two of the next three, but Wade pulled clear and took out a match-high 101 finish on his way to victory.

"I was happy with that," said Wade. "I made a few breaks and a few chances of my own tonight and, playing like I have done for the last couple of days, I know what I'm capable of." 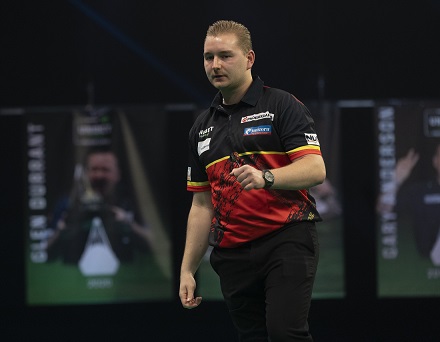 Dimitri Van den Bergh missed double 18 for a nine-darter as he edged out Gary Anderson 7-5 to remain a point clear at the top of the table.
That effort at a perfect leg came in leg five as Van den Bergh posted a ten-darter to move 4-1 up, before the two-time Premier League winner pulled back to five-all. However, Anderson missed five darts at doubles to move 6-5 up as Van den Bergh earned at least a point, before four further misses allowed the Belgian in to take both points.

"It could have gone either way, we missed a load of doubles," said Van den Bergh. "I think Gary kept me under pressure with his scoring but I got a bit of luck today. "I thought the double 18 on the nine-darter was going in, but I went downhill from there. I think I've won my worst game, and it was a little bit of karma." 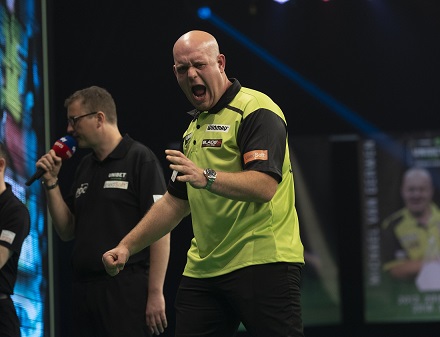 Five-time Premier League winner Van Gerwen produced a 105 average to defeat Jose de Sousa 7-4 in a game where the pair shared 14 180s. Van Gerwen opened with a showpiece 125 finish and also took out 79, 96 and an 11-darter in moving 5-2 up. De Sousa hit back by winning two of the next three, but Van Gerwen closed out the win to move up to second, ahead of Aspinall on leg difference.

"I'm happy with my performance," said Van Gerwen. "I made it a little too difficult for myself, because I wanted to get the win over the line. "It feels good but a win is a win, and it doesn't matter how you win. I still have more in the tank and I need to make sure I concentrate on my game."

Thursday's Night Nine will now begin as Durrant and Cross compete in their final game of the season, before the remaining eight step up the battle for Play-Off places. Van Gerwen then meets Clayton, Aspinall will face Anderson, De Sousa meets Wright and Van den Bergh plays Wade.