Debutant Jonny Clayton tops the Unibet Premier League table heading into the first mid-season break after he claimed a 7-4 win over Gary Anderson in Milton Keynes on Friday.
Clayton's dream start to his maiden Premier League campaign continued as he averaged just under 100 to go a point clear of four players at the summit on seven points. The Welshman fired in six 180s and took advantage of ten missed double attempts from Anderson to end the first block of league action on a high. 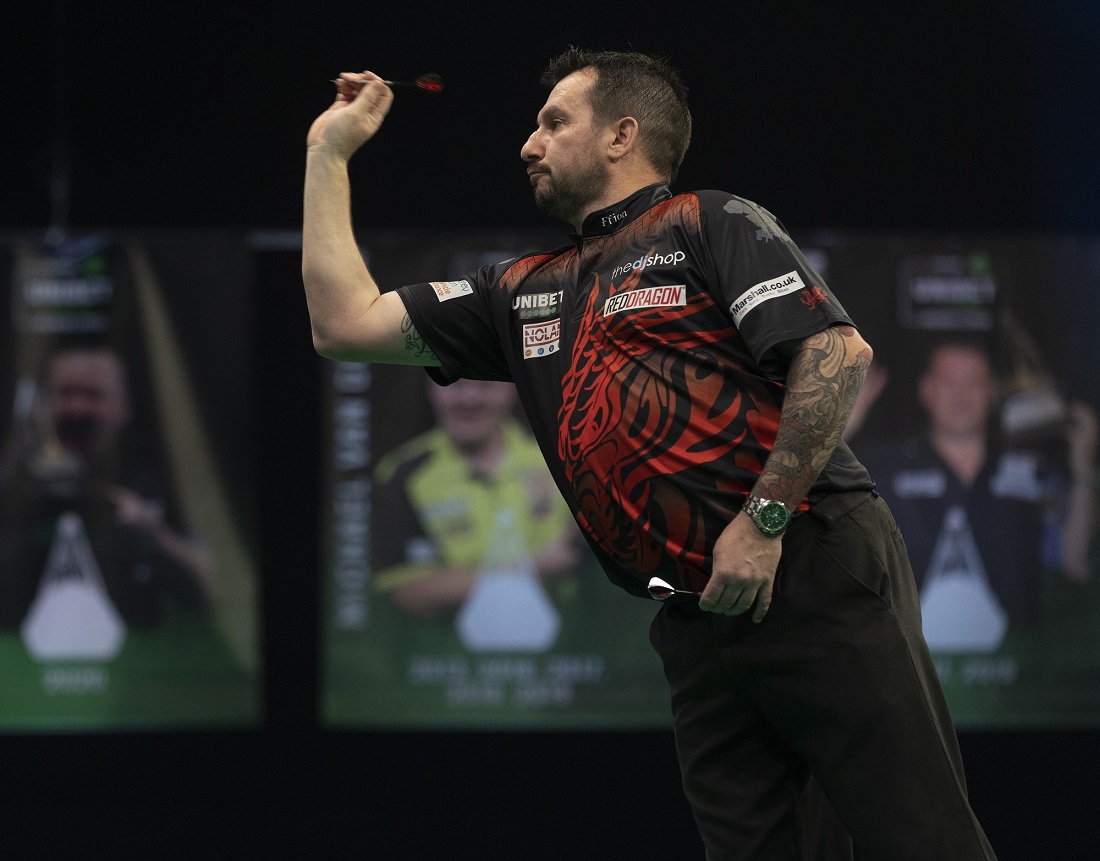 "You dream of having a start like this for a first attempt in such a big tournament, I'm one happy Welshman," said a delighted Clayton, who hit a nine-darter on Night Three. "Gary has always been one of my favourite players, I love the way he plays, so to beat him on a stage like this is a dream come true. "The game was played at some pace, by the time I'd had a sip of water it was already my turn to throw. It was maybe a little bit quick for me but it didn't do me too much harm."

Last year's runner-up Nathan Aspinall produced a stellar 105.38 average in a 6-6 draw with Michael van Gerwen, but was left relieved at the end of the match after the Dutchman missed a match dart.
Five-time Premier League champion Van Gerwen was looking to bounce back from defeat to James Wade on Night Four, but was unable to break down a resurgent Aspinall. 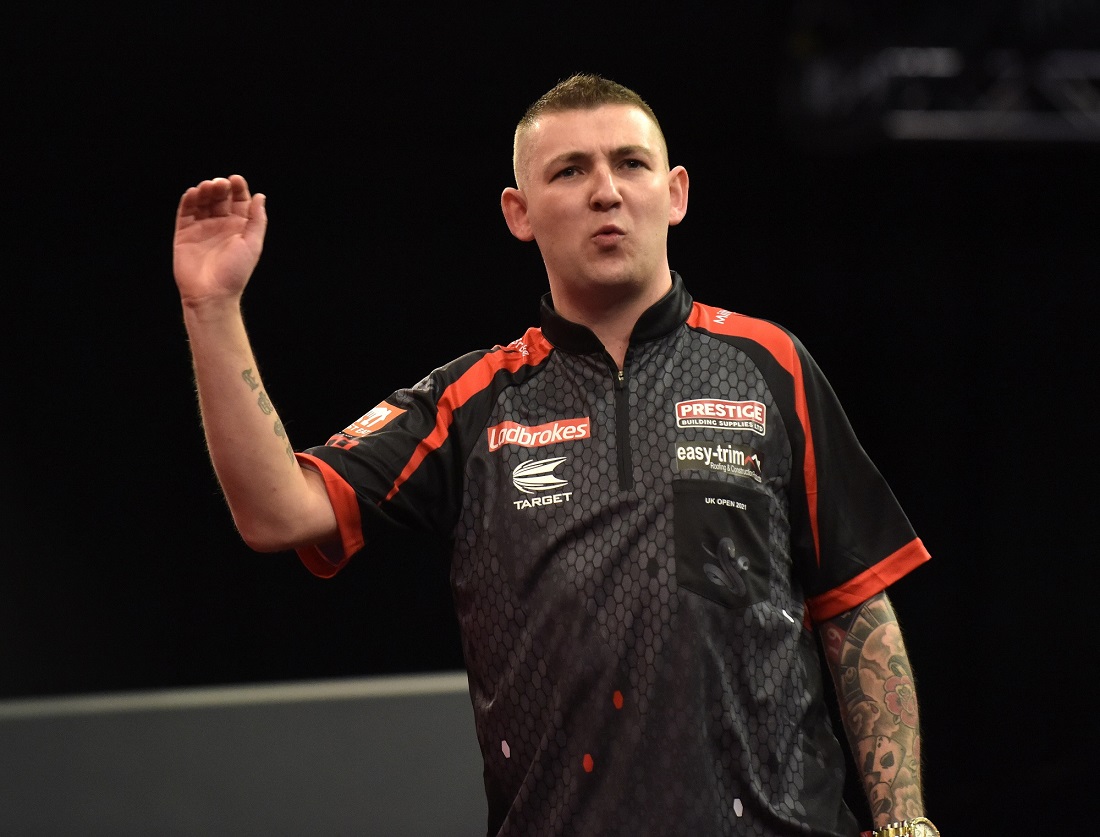 Having pinned checkouts of 148 and 100, Van Gerwen led 6-5 and earned himself one dart at double top for the match. Van Gerwen dropped low with his attempt, but Aspinall made no mistake on the same target with his last dart in hand to wrap up a 68 checkout for the match.

"I'm very happy to get a point," said Aspinall. "For me he's the best player in the world so to get any result against Michael is always a positive. "I've had a great week, if I'd been offered six points from the first ten available I would've taken that. "I'm getting better with every night, I'm feeling more and more confident and I'm looking forward to coming back refreshed." 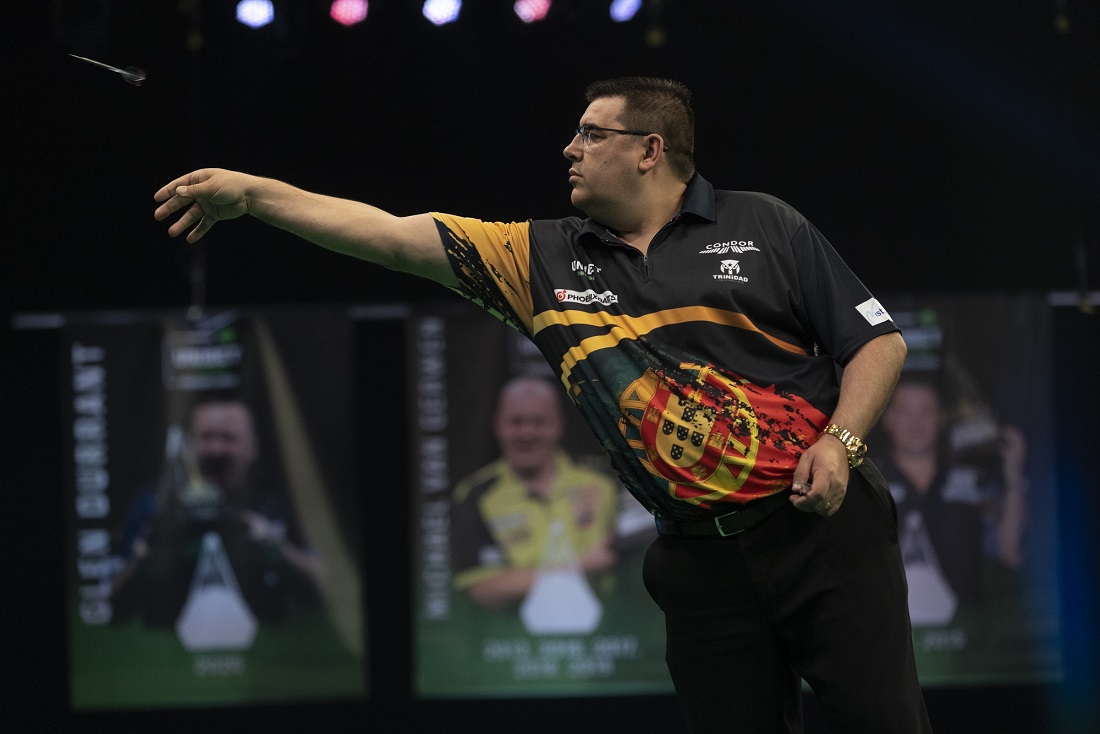 For the second successive evening, Jose de Sousa produced the performance of the night in claiming his first Premier League victory over Dimitri Van den Bergh, running out a 7-3 victor. Having landed a nine-darter on Night Four, De Sousa rattled in six trademark 180s but improved accuracy on the outer ring saw him hit 50 per cent of his checkout attempts to claim a valuable two points, inflicting a first defeat of the season on the Belgian.

Peter Wright extended his unbeaten run to three matches as he recovered from 5-3 down to claim a 7-5 victory over Rob Cross, seeing the 2020 World Champion join Van den Bergh, Aspinall and Van Gerwen on six points. A change of darts didn't seem to be working for Wright in the early stages, but he found a way to win the final four legs without reply to leapfrog Cross in the league standings.

2009 champion Wade backed up his defeat of Van Gerwen on Night Four with a comfortable 7-3 success over Glen Durrant. The UK Open winner was on target with 50% of his checkout attempts - including a 152 finish - to deny a route into the contest for defending champion Durrant, who appears destined for an early elimination following five straight losses.

The tournament will resume from April 19-22, as league phase Nights Six-Nine take place, with the bottom two players eliminated on Judgement Night while the remaining eight are left to battle it out for Play-Off spots.

The Unibet Premier League is broadcast through Sky Sports in the UK and Ireland, RTL7 in the Netherlands, DAZN in various worldwide territories including Germany & America, as well as through the PDC's global broadcast partners and on PDCTV for Rest of the World Subscribers outside of the UK, Ireland & Netherlands.