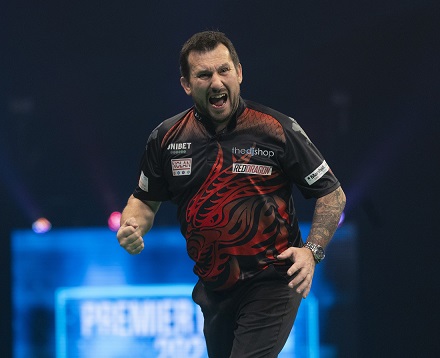 The sudden-death battle for the fourth Play-Off spot between two debutants was played in front of a sell-out crowd at the Marshall Arena, with Clayton rising to the occasion as he posted a 103.92 average in keeping his title hopes alive.
The last fixture of the 2021 league phase saw Van den Bergh also average over 100, but despite hitting six 180s the World Matchplay champion was denied opportunities by Clayton, who clinically hit eight of his 14 checkout attempts.

"Tonight was an absolutely massive game, probably the biggest I've ever played in my life," said Clayton, who picks up £80,000 for reaching the top four, the biggest payday of his career to date. "To reach the Play-Offs in my first year in the Premier League, I'm delighted to have got over the line. "Hopefully I can do this year after year, but I've got nothing to lose now. I'm here to win like everybody else, I just need to two more wins. "The crowd were superb, their support means so much to me."

Clayton will take on Van Gerwen in the semi-finals after the five-time Premier League champion topped the league phase for the eighth time in nine appearances - bouncing back in style from a sixth-placed finish in 2020. 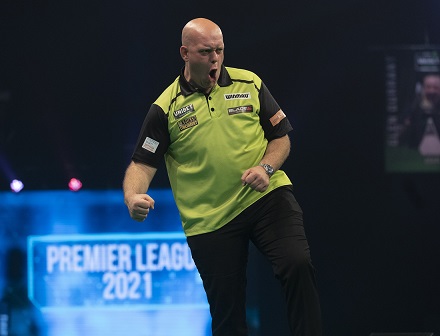 After Nathan Aspinall failed to beat Jose de Sousa earlier in the night, Van Gerwen's place on top was assured but the Dutchman ended his season with an 8-6 defeat of old rival Peter Wright. A repeat of the 2017 final saw Van Gerwen average 100.20, hitting checkouts of 145, 126 and 113 to head into the Play-Offs on the back of a hat-trick of victories.

"To top the table is really important for me, but the tournament isn't finished yet," said Van Gerwen. "I want to win that title tomorrow. "I can't really complain with 23 points, considering where I came from last year. "It's always nice to beat Peter, he is a class player and I enjoyed playing in front of the phenomenal crowd tonight." 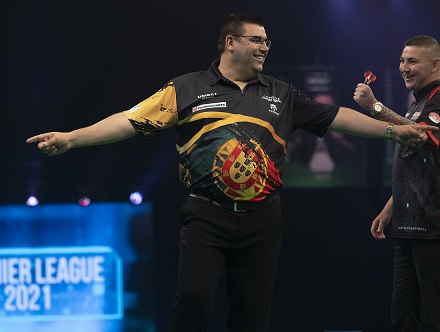 De Sousa lit up the arena with an audacious 120 checkout using three double tops on his way to an eye-catching 8-3 defeat of Aspinall, with the pair set to meet again in Friday's semi-finals.
Last year's runner-up Aspinall needed victory to put pressure on Van Gerwen for the league leader spot and took out 152 in the game's second leg, but he was left powerless to halt De Sousa as the Grand Slam of Darts champion sealed the win with a 149 finish. De Sousa also broke the tournament's 180 record with 81 for the season, hitting three trademark maximums en route to his fourth win in five outings.

"It was a great feeling to play so well in front of this amazing crowd," said De Sousa. "I don't play to break records, but it is nice to hit so many 180s. "Three double tops was for the fans, but I wanted to show it can be done. "It has been a fantastic first season in the Premier League for me. I am very happy with the way things are going right now." 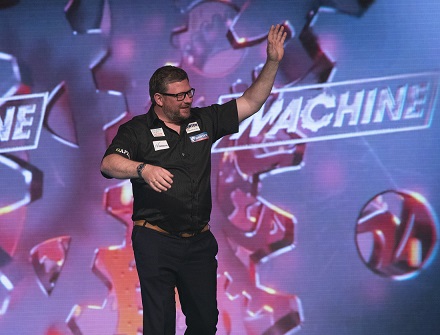 Meanwhile, the opening game of the night saw James Wade end his 11th Premier League campaign on a high with an 8-6 win over Gary Anderson, though both former champions were already condemned to elimination prior to Night 16.


Friday's Play-Offs will begin with the first semi-final between Van Gerwen and Clayton, followed by De Sousa v Aspinall, with the winners returning for the final after a short interval.