Michael van Gerwen moved top of the Unibet Premier League with an 8-3 victory over James Wade on Night 12 in Milton Keynes. 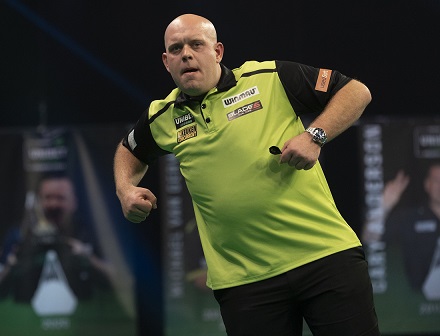 As the battle for Play-Off places continued at the Marshall Arena, Van Gerwen claimed a third straight win of the week to move two points clear of Nathan Aspinall and Dimitri Van den Bergh at the summit.
A match of outstanding quality saw Wade average 110.28 - the highest of any player so far this season - to Van Gerwen's 107.44, though it was the Dutchman's superior accuracy on the doubles that saw him prevail. Wade, who defeated Van Gerwen in the Premier League on Night Four, was powerless to stop the five-time champion on this occasion as he landed checkouts of 135, 128 and 104 in a vintage display.

"I can't really complain because James put me under so much pressure that I had to do well," said Van Gerwen. "To do the right things at the right moment against a player like James is important and gives me a lot of confidence. "I need to be happy with this and I can build towards the next games now. I feel good and from here on I want to do more. I'm still not consistent enough so I need to make sure I keep my concentration. "I want to win this title back. I think I'm doing a great job so far, but it's still too far away. I always believe in myself but there's still four more games to go before I play a semi-final and final." 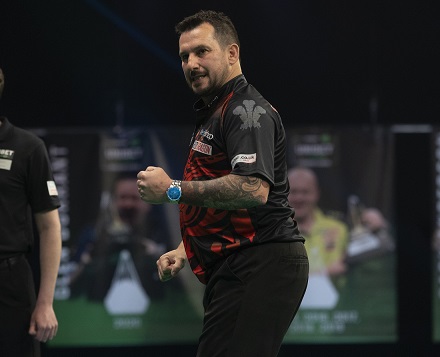 Aspinall was displaced from top spot after he went down 8-6 to Jonny Clayton, who stays in the hunt for a Play-Off place in his debut season following a sixth victory. Clayton returned to winning ways with a hard-fought 8-6 win in a game which saw both players struggling for accuracy on the outer ring.
The pair missed 45 double attempts between them, though it was Clayton who held himself together to inflict back-to-back defeats on Aspinall, who saw one dart at tops to snatch a draw in the final leg land just low. 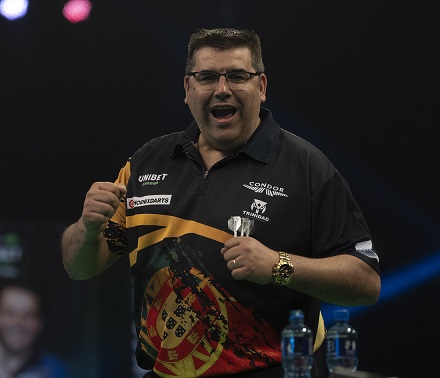 The opening game of the night saw Jose de Sousa continue his impressive debut campaign as he thrashed an out-of-sorts Peter Wright 8-1 to keep hold of fourth place. Wright, who continues to struggle with a shoulder problem, was made to pay by De Sousa as the Grand Slam champion showed no mercy, averaging 102.9 and hitting 62% of his checkout attempts to romp to victory.

"The two points gives me great confidence," explained De Sousa, who allowed a 6-2 lead to slip as he drew with Wade on Thursday. "Last night, I was a little bit disappointed with myself - I had so many chances to beat James but sometimes the things don't go the way you want. But one point is very good - it's been a good week. "Peter wasn't in his best game today, but 8-1 is a big win in the Premier League right now so I'm happy with my result." 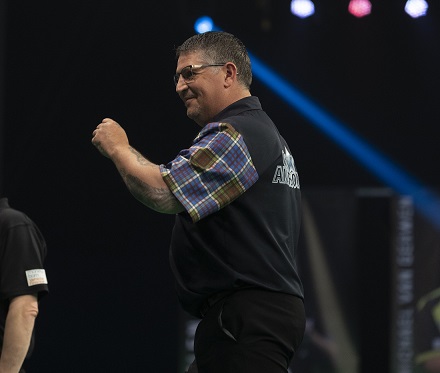 Gary Anderson stayed in touch with the top four as he made it back-to-back wins for the first time this season with an 8-4 defeat of Van den Bergh.
A repeat of the 2020 World Matchplay final saw Anderson post a whopping 107.85 average to Van den Bergh's 104.4 in another contest of supreme quality. A trademark six 180s from Anderson, along with two ton-plus and a hitting rate on the doubles of 80 percent, checkouts helped Anderson on his way to a vital two points.

The Unibet Premier League resumes on Monday May 24 with Night 13 in Milton Keynes, the first of four league consecutive league nights before the Play-Offs on Friday May 28. For this last Premier League block the crowd will return.