Michael van Gerwen produced the highest average so far in the 2021 Unibet Premier League season with a stunning display as the tournament resumed on Wednesday, with Nathan Aspinall moving two points clear at the top of the table. 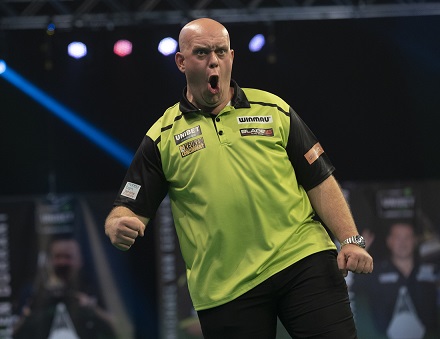 Michael van Gerwen produced the highest average so far in the 2021 Unibet Premier League season with a stunning display as the tournament resumed on Wednesday, with Nathan Aspinall moving two points clear at the top of the table.

Dutchman Van Gerwen had endured some indifferent form during the first half of the season, and was two points adrift of Aspinall and Dimitri Van den Bergh as the remaining eight players returned to Milton Keynes.
However, he averaged almost 110 in an 8-3 defeat of Van den Bergh to leap above the Belgian in the league table on leg difference with a sensational display - despite his opponent averaging 107 in reply and also missing just two darts at a double. Van Gerwen stormed into a six-leg lead with a run of legs between 11 and 15 darts, checking out 126 and 123 on the bull in the process. Van den Bergh hit back with legs of 13, 12 and 14 darts to halve the deficit, but an 11-darter restored Van Gerwen's dominance before he wrapped up the win with a 13-dart leg. The Dutchman now meets Jonny Clayton on Thursday, and believes that he needs to add consistency to his game if he is to claim a sixth Premier League title at the end of May.

"Of course I'm over the moon - I think I did well tonight and I felt good," said Van Gerwen. "I put him under pressure straight away and I focused on my own game. "Last week I had a horrible week because I played really bad in the Super Series in Germany, so I had to come back and put up something good - never write MvG off on stage! "I'm always critical of myself because I know what I'm capable of, and you can see now that it's still there. There's still work to do but I feel good and you have to keep fighting hard. "I demand a lot of myself and displays like this give you confidence - but it's history now and I need to look to the future now, and that's tomorrow." 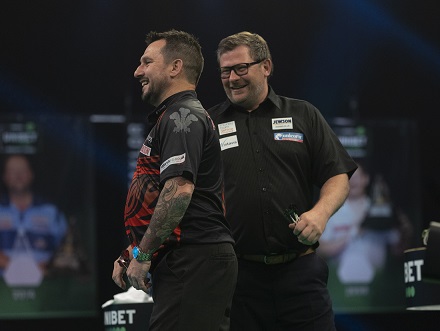 Clayton also impressed on his return to action at the Marshall Arena with a fifth victory of the campaign, coming from two legs down to defeat James Wade 8-5 with a 105 average.
Wade had taken a 7-2 win when the pair met on Night Eight, and looked on course to repeat that when he opened up an early 3-1 lead, defying a 150 checkout from the Welshman by finishing 86, 121 and tops to punish his opponent's misses. Clayton hit back with three straight legs, including a brilliant 134 finish to break in leg six, as he moved ahead for the first time, only for Wade to finish 78 and double 12 to remain flawless in his finishing at five-all. Clayton, though, landed two 180s in an 11-darter before breaking throw on double 16 to move 7-5 up, and he took out 76 to secure the two points and jump above Wade in the league table.

"I'm really happy with that," said Clayton. "I knew what I had to do because of what James did to me a couple of weeks ago, so there was a little bit of revenge. "I wanted to play well - you don't shake James off and you've got to battle to the last dart. Tonight he finished everything so it was difficult." 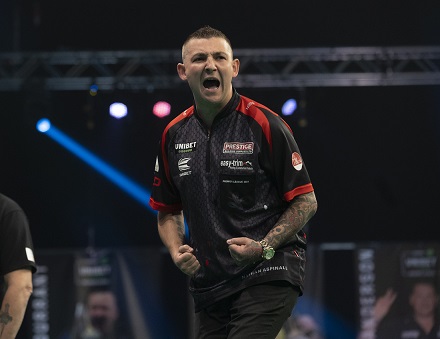 Aspinall sits two points clear of Van Gerwen and Van den Bergh after producing a rousing comeback to defeat Peter Wright 8-5 and pick up his sixth win of the season.
The 2020 runner-up trailed 4-2 before following a 177 score with double 12 to finish 201 in four darts in leg seven - sparking an on-stage call to "wake up" which he obeyed with five straight legs. That included a 161 finish as he moved ahead for the first time at 5-4, and though Wright pulled back a leg there was to be no denying Aspinall, who landed two 180s in an 11-darter to seal victory.

"It wasn't great, but in the context of tonight it was a massive two points," said Aspinall, who is now unbeaten in his last eight matches. "I'm happy with the points but disappointed with the performance. "It was my worst performance of the season but I dug deep and ground a result out. I expected so much of myself because I felt great in the practice room. "I've beaten the world number two, last year's World Champion, playing under par. I was very flat at the start of the game but I managed to get my adrenaline pumping. "I did have a couple of good moments in the game - the 201 in four darts was good, and the 161 was a massive shot to help me take control of the game." 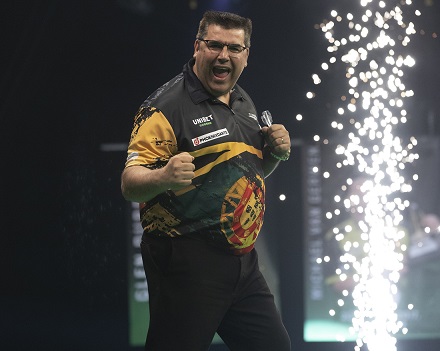 Jose de Sousa claimed his fourth win of the season, seeing off two-time Premier League winner Gary Anderson 8-3 as he averaged almost 100 and hit 50 percent of his darts at a double.
The Portuguese took out 98, 99 and 88 on his way to a 5-0 lead to take command of the contest, before Anderson hit back by winning three of the next four. De Sousa, though, proved too strong and won the next two legs to secure the points and leave Anderson three points adrift of the top four.

"Two points is a very good way to start this week," said De Sousa. "When you play against a player like Gary, it's a big win because he is a World Champion. "He didn't play his best game and I punished him in some legs. My doubles were been much better and I feel great, but I still have to work hard. "Today I had to control the game, and I did - with my scoring and my doubles I can win matches."

Thursday's Night 11 will begin as high-flying Aspinall and Van den Bergh clash, before De Sousa and Wade meet in a repeat of the 2020 Grand Slam of Darts final. Scottish World Cup-winning team-mates Anderson and Wright then face off, before Van Gerwen aims to avenge his Night Nine reverse against Clayton.