Rob Cross is left propping up the Unibet Premier League table going into Judgement Night after defeat to Michael Smith on Night Eight in Milton Keynes, whilst Glen Durrant edged out Michael van Gerwen in a top-of-the-table clash. 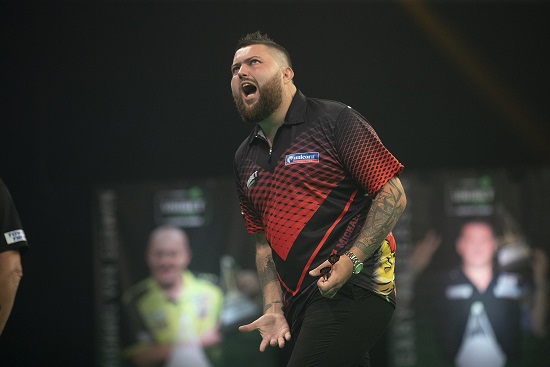 Wednesday's 7-3 loss to Smith compounds a miserable restart to Premier League action for 2019 finalist Cross, having suffered a 7-2 defeat to Michael van Gerwen on Night Seven. The former World Champion will now need to take something from Thursday's tie with Durrant and hope that other results to go his way on Judgement Night if he is to avoid elimination.
Cross was under pressure going into his tie with Smith, with Gurney having just seen off Nathan Aspinall 7-5 to move above him in the league table as things stood. Smith got off to a flying start and lead 3-0, but Cross showed some resilience - including a match-high 143 checkout - to level at 3-3 and give himself life. However, he was unable to replicate that fighting spirit when it mattered most, and Smith regained his composure to string together four straight legs to consign Cross to a 7-3 defeat and leave him staring at elimination on Night Nine.

"I've turned up this week and tried every time I've gone up there but it's not happened and I suppose that's darts," admitted Cross. "I missed a fair few doubles. Off the top of I've missed 32 twice with three darts in my hand, which is unforgiveable. I'm looking forward to the game with Glen and it's nice to be back playing." 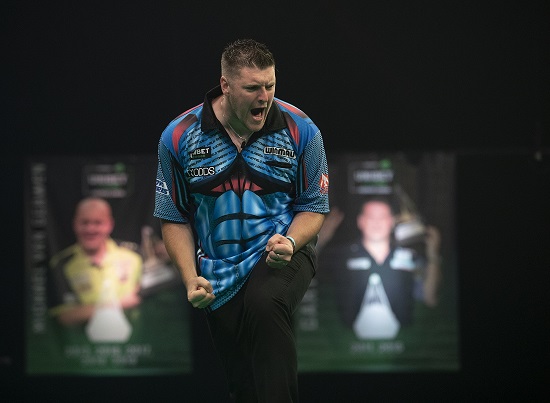 Gurney's Premier League revival has come courtesy of back-to-back wins to resurrect what looked a doomed campaign ahead of the enforced break due the coronavirus pandemic.
The Northern Irish ace had claimed just two draws in the opening six weeks in February and March, but having seen off Challenger Chris Dobey on Tuesday, he backed up that success with a hard-fought 7-5 victory over former UK Open champion Nathan Aspinall. In a tense start, the pair traded the opening six legs before Gurney - who had landed a 144 checkout in leg four - found his rhythm and moved into a 5-3 lead. Gurney then guaranteed a point at 6-4, but Aspinall once again ramped up the pressure as he moved within one leg at 6-5. However, a strong final leg, finished with an 82 checkout, saw Gurney clinch a valuable two points and improve his leg difference over Cross.

"Before this week started I wanted to win my three games and if I get eliminated then so be it," said Gurney. "I've won two games so it's so far, so good. "I was taking out some finishes with my last dart, there was the 144 and I think a 68 which really hurt him. I'm glad to play a game for once that was as good as I've been practising. "I hung in there and took my opportunities. If I can keep that up, I'll be hard to beat. I've got Peter Wright tomorrow and if I can win that, I'll be very happy - there's not much more I can do." 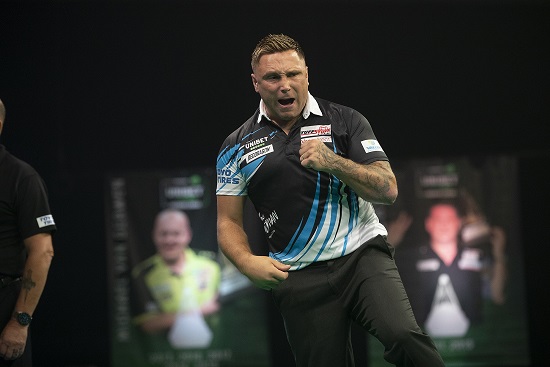 Gerwyn Price effectively secured his survival with a thumping 7-1 victory over Gary Anderson to kick off Night Eight, meaning that he now needs just one leg from his Judgement Night tie with Jermaine Wattimena to ensure a place in the second half of the season.
Anderson - who cruised past Smith with a 109 average on Tuesday - never really got going as Price quickly raced into a four-leg lead. The Scot had his one shining moment as a 116 checkout gave him his one and only leg, but Price quickly rattled off the remaining three to secure a huge two points.

"I needed to win to put the pressure on the other players and I've done that," said Price. "I'm still under pressure and it still depends on other results but I just want to prepare and try to win tomorrow now. "I'm happy with the win - 7-1 is a bit flattering but I think I deserved to win. I don't think Gary played particularly well but I got ahead of him early, put him under pressure and took my chances. "I'm playing well, I just need to be a little bit more confident. Having five months off, you need games to get yourself going and I just need to play more regularly." 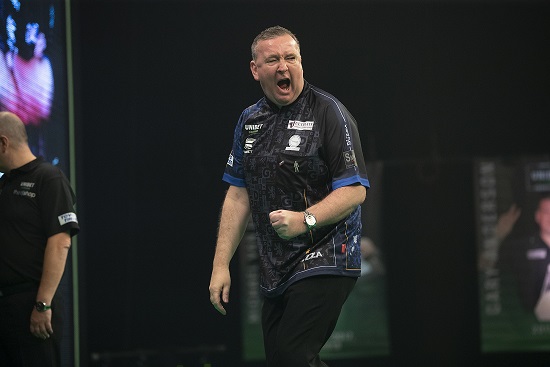 At the opposite end of the table, Premier League debutant Durrant moved two points clear with victory over Van Gerwen in the meeting of the top two. Durrant, who was labelled as 'boring' by the reigning champion heading into the crunch match, made the Dutchman eat his words in a stunning 7-3 victory.
Having reclaimed top spot on Tuesday on leg difference, Van Gerwen was looking to increase his advantage in the table but looked lacklustre in response to a ruthless performance from Durrant, who averaged 104 and landed 58% of his checkouts. After sharing the opening four legs, Durrant lit the fuse with a stunning 167 checkout to break the Van Gerwen throw. That sparked a run of four straight legs to guarantee a point and move 6-2 ahead. Van Gerwen clawed one back, but it was only delaying the inevitable as Durrant finished 62 to secure a huge win.

"That's a big win and I'm a happy man," said Durrant. "Whatever sport you're in, it's special to beat the best player in the world and this is up there with any night in my career. "Michael's the best player in the world right now and the second best player ever to pick up a dart, and tonight I beat him. "It's amazing - I've got so much respect for him and I'm going to enjoy the moment. I feel that I'm right up there now as one of the top ten in the world and I'm only going to get better. "I'm top of the Premier League and I'm proud of that, but I just want to stay in the top four now and make sure I'm in the Play-Offs." 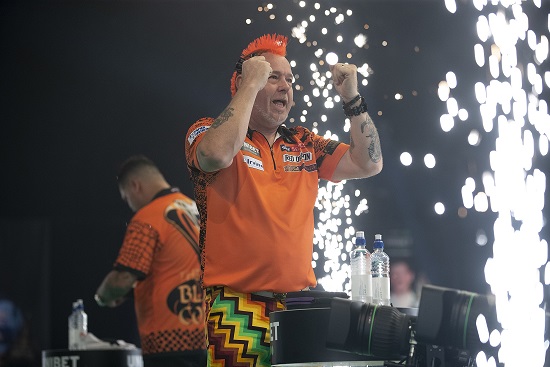 In the final game of the night, Wright kept up his charge on the Play-Off places as he comfortably saw off Challenger Jeffrey De Zwaan 7-1 to move into third place, level on ten points with Van Gerwen. A stunning 130 checkout was the crowning moment for the World Champion as he rarely looked troubled, cruising to victory with a 102 average.

"I saw the other results earlier so I knew I had to get a big win and I'm happy with that," said Wright. "If you give Jeffrey a sniff he'll trounce you - he's beaten Michael in two big matches and he's a quality player. I had to try and pounce on him as much as possible. "There's loads more to come with the darts I'm using at the moment; I can hit more 180s, I finished well tonight and I'm excited about the future with them."

The Unibet Premier League action continues on Thursday with Judgement Night, with the bottom-placed player set to be eliminated following the five ties at the Marshall Arena.
Aspinall's tie with Smith opens proceedings before Van Gerwen takes on Anderson in a clash of two multiple World Champions, before the three matches in the elimination battle take to the stage. Price firstly meets Dutchman Wattimena, who is the final Challenger to take to the stage this season, and knows that one leg will ensure his survival. Gurney will then face Wright as the Northern Irish ace bids to cap his "Great Escape", before Cross meets Durrant in what could be the pivotal tie in the race to avoid elimination.