Michael van Gerwen bounced back to winning ways in the Unibet Premier League with a spectacular 7-5 defeat of Gerwyn Price in Liverpool on Thursday, as Glen Durrant retained top spot in the league table. 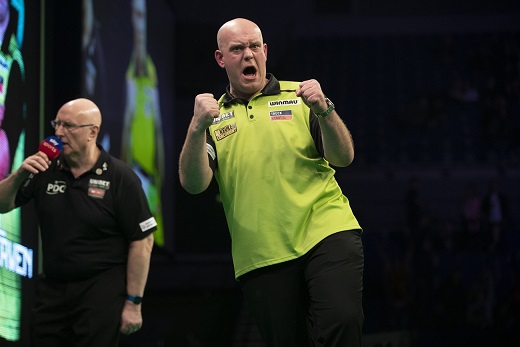 Reigning Premier League champion Van Gerwen was defeated by Michael Smith in Exeter a week ago, but responded by winning the UK Open over the weekend, before seeing off Price 7-5.
Van Gerwen defeated the Welshman 11-9 in the UK Open final, and again came through a tight contest as a break of throw in the game's 11th leg at the M&S Bank Arena proved the difference. The pair traded legs like prize boxers, with Van Gerwen's early 11-darter followed by an exchange of 80 checkouts before Price produced a superb 157 finish - with the Dutchman waiting on 36 - to lead 4-3. Van Gerwen responded with a rare 123 finish of outer bull, treble 20 and double 19 as he levelled, before taking out 78 and 81 in successive legs as he moved ahead for the first time at 6-5 with a 12-darter. The world number one then showed his class in the deciding leg, scoring 177 and 180 in a 13-darter to claim the victory, ending the game with an average of 106.27 - his highest of the season to date.

"My confidence is right back up there after winning the UK Open at the weekend and tonight was another good performance from myself," said Van Gerwen. "I'm over the moon with how I played. Gerwyn played great, he threw everything he had at me and I had all the answers. "The 157 really hurt me, and you know he can do that in the right moments. You always have to keep believing in yourself and that's why I won this game. "This was the total package for a lovely game. The crowd was involved, the darts were great, there was some phenomenal finishing and I think it was a good game to watch." 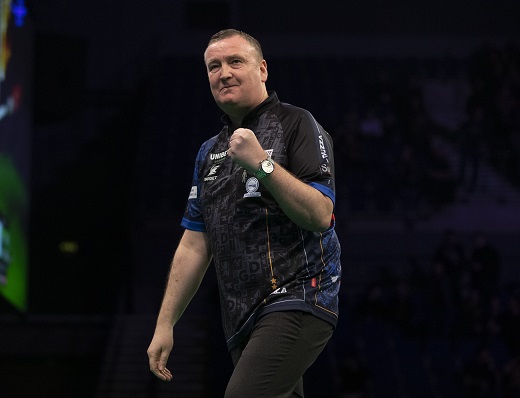 Durrant, meanwhile, remains top of the Premier League table after claiming his fourth win in six matches by seeing off Daryl Gurney 7-5.
Three-time Lakeside Champion Durrant is enjoying a memorable debut season in the Premier League, and showed his quality to deny UK Open semi-finalist Gurney his first victory of the season. Northern Ireland's Gurney opened the contest with a 144 checkout, but Durrant followed a 13-darter with finishes of 80 and 127, on the bull, as he moved 4-1 up. Checkouts of 68 and 88 secured Durrant at least a point at 6-3, with Gurney hitting back strongly to take the tie into a deciding leg, only for the Middlesbrough man to deny him a dart at 24 by finishing tops to secure the win.

"I knew if I won tonight then it was me pretty much through to the next phase of the competition, so that's a big result for me," said Durrant. "It wasn't easy - it was a real battle against Daryl, who is fighting to get off the foot of the table. My scoring game is a bit frustrating at the moment so I've still got a bit of work to do. "But if you'd said after six games I'd be top of the table I'd have ripped your hand off for it, so I'm a happy man right now." 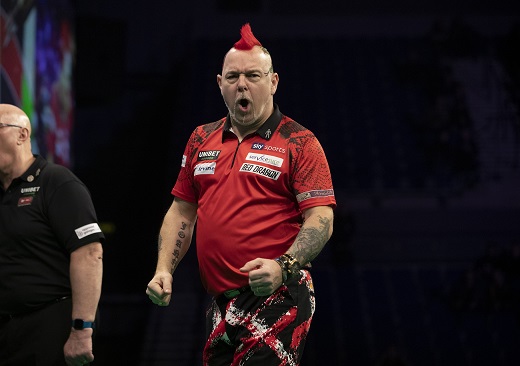 Peter Wright moved level with Michael Smith and onto seven points in the Unibet Premier League table by defeating the St Helens ace 7-4 in their Liverpool contest.
Smith kicked off the game with a 14-darter, but Wright landed two in reply and a 13-darter on his way to a 5-1 lead. A 13-darter from the World Champion secured him at least a point as Smith took three of the next four to threaten a fightback, but Wright sealed victory in style with a ten-dart finish.

"I made hard work of it," admitted Wright. "Michael's been playing some fantastic darts - he's a quality player and when he started coming back at me I said to myself 'no, you're not getting a draw off me.'. "I knew I had to come here and get some points so it's good to get two points. It's tight in the table and I think it's the best Premier League that we've had in a long time, everyone's playing fantastic darts and it's very difficult."
Wright had lost to Gurney in the last 16 of the UK Open on Saturday, and added: "I'm happy to get the two points and bounce back from last weekend's disappointment. "I really thought I was going to win the UK Open but that's gone now and I've put that behind me with this result."

Rob Cross eased his elimination fears with a draw against Stephen Bunting, the St Helens ace who returned to the Premier League stage as a Challenger.
Bunting made a superb start as two breaks of throw, including a 13-darter, moved him into a 4-1 advantage. Cross took the next three to level and finished 119 to move ahead, before a third-dart double 16 secured a point at 6-5, only for a missed double 18 to allow Bunting in to share the spoils.

Bunting said: "Rob is a difficult player to play and I've never beaten him yet, but in the future I will get him. "I'm disappointed with the performance to be honest, I've been playing better than that. Being back up on that stage is going to take time to get used to, but I need to get used to it because it's where I want to be. "Hopefully I can be back in the Premier League full-time in the future." 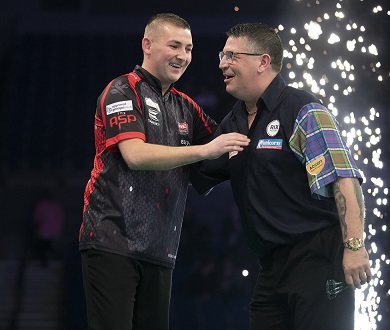 Gary Anderson jumped above Cross and Price onto six points as he drew with Nathan Aspinall, who hit back from 5-1 down to claim a point in another fast-paced thriller.
Aspinall recovered from six missed doubles in the opening leg with an 11-darter to level, only for Anderson to pull away by winning the next four without reply. Aspinall responded superbly with legs of 13, 11, 14 and 11 darts as he hit back to five-all, only for a 95 finish from Anderson to secure him at least a point at 6-5. The two-time Premier League winner also opened the deciding leg with a 177, but Aspinall responded with his eighth 180 of the game before finishing 88 for a 12-darter to claim his first draw of the season.

Aspinall ended the game with the second-highest average of the season so far of 107.64, and admitted: "I'm happy that I came back and got the point. I missed so many darts in the first leg and I got it back to five all. "He broke my heart with the 95, it was a great shot, because I was in control for those four legs. I was so focused and I played some phenomenal darts. "Gary was one of my idols growing up and every time I play him it's an honour. I didn't beat him this time but I nicked a point off him, so I'll take that."