Nathan Aspinall inflicted a first Unibet Premier League defeat of 2020 on Michael van Gerwen on Night Three in Cardiff, while Gerwyn Price was held to a 6-6 draw by Daryl Gurney in the Welsh capital. 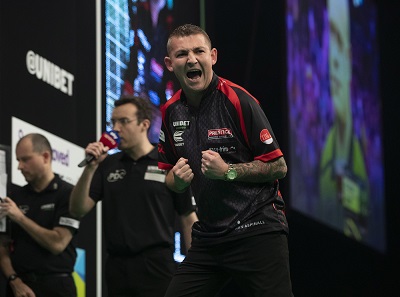 Having been at his imperious best in the opening two nights of action, five-time Premier League champion Van Gerwen was halted in his tracks by Aspinall who won 7-5 in front of a sell-out crowd at Motorpoint Arena.
Following a mixed start to his maiden campaign with a win and a loss in his opening two matches, Aspinall got off to a great start against the world number one as he pinned a 110 checkout on his way to a 4-2 lead. Van Gerwen hit back with three successive legs to hit the front, only for Aspinall to stop the rot with a last dart double 18. The 11th leg saw Van Gerwen hit some uncharacteristically low scores, and Aspinall took full advantage, hitting double top in each of the last two legs to rack up his third win in six attempts against the Dutchman.

"I feel like I've arrived in the Premier League now, it doesn't get much better than beating the best player in the world on the Premier League stage," a delighted Aspinall explained. "I haven't been at all happy with how I played in the first two weeks, which makes it an even better feeling to play well tonight. "It was important for me to prove to everyone and myself that I can play well in the Premier League. "I enjoyed every minute of it up there tonight and I think that's when I'm at my best. The crowd were fantastic. "I was disappointed with how I played against Michael at the World Championship so it was nice to get one back over him." 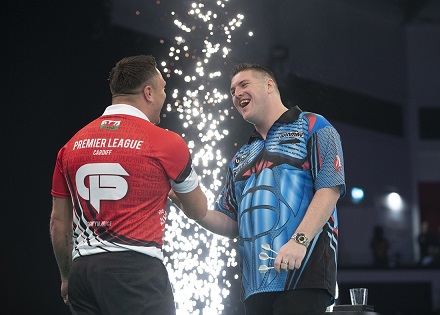 Welsh number one Price was unable to deliver a win for his army of fans as he drew for the third consecutive week, this time against Gurney, who picked up his first point of the campaign.
A tight affair, in which both players missed a number of darts at double, saw the opening eight legs all go with throw before Price struck the first break to go 5-4 ahead. Undeterred, Gurney won back-to-back legs to secure the draw, but Price held firm in the last leg to maintain his unbeaten start to the season.

"The crowd tonight were fantastic, I wish I could've won for them but it wasn't to be," said Price. "Fair play to Daryl for hitting his doubles under pressure, he deserved something from the match. "I'm not happy but I've picked up a point so it's not all bad. "Everyone is playing well against me lately but it's time to start converting draws into wins." 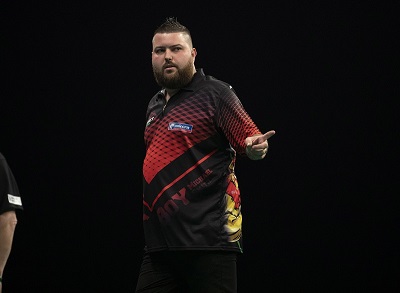 Price's World Cup teammate Jonny Clayton suffered a baptism of fire on his Premier League debut, as Michael Smith produced the performance of the night to claim a 7-1 victory, ending his ten-match winless run in the Premier League.
Welsh number two Clayton, the highest-ranked of this year's nine Challengers, took the opening leg but had no answer to a Smith onslaught, which saw the former Premier League runner-up average 105.51. A 167 finish from Smith put daylight between the pair at 4-1 and three legs later he wrapped up victory with a 142 finish to taste victory in the Premier League for the first time since March.

"I'm over the moon to get my first win of the season, I can't believe it's been ten games since I last won in the Premier League," said Smith. "Jonny gave me a couple of legs at the start and the 167 really did change things. "Once I got a lead I was telling myself not to make the same mistake as last week; I was really angry with myself that I threw that one away." 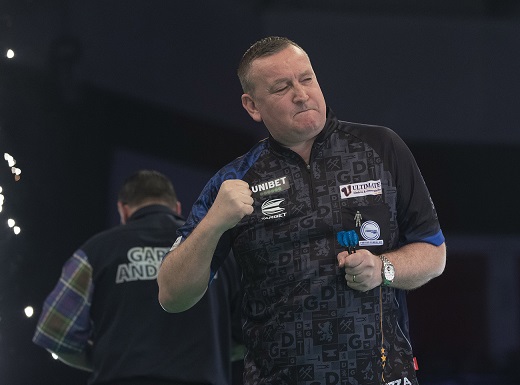 Glen Durrant is the early leader in the standings after he made it two wins from three with an eye-catching 7-4 defeat of Gary Anderson. Having salvaged a point against Fallon Sherrock on Night Two, Durrant was at his clinical best as he landed finishes of 107, 89 and 85 on his way to a 5-1 lead. Two-time Premier League champion Anderson hit back with checkouts of 122 and 64, but Durrant maintained control of the contest to move to the table summit.

"I'm in a great place right now, I never thought I would be top of the Premier League at any point of my career," Durrant admitted. "To beat one of the all-time greats in Gary in front of this amazing crowd is an unbelievable feeling. "I can't say I enjoyed the Fallon game last week but tonight absolutely made up for it. "I wish I was bullish and say 'I'm going to finish in the top four' but that's not the person I am. "I still just want to avoid being eliminated so that will be my focus until I achieve that goal." 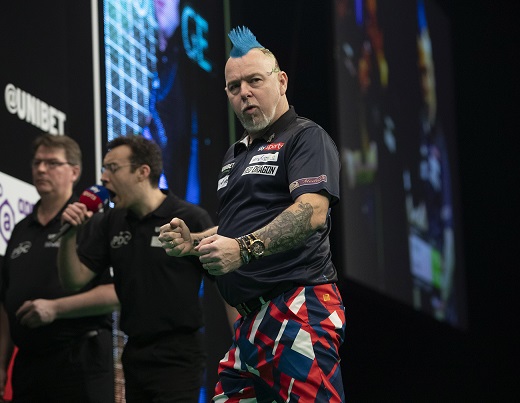 World Champion Peter Wright eventually found his way to a first victory of the campaign with a 7-5 defeat of Rob Cross, though Wright averaged over 20 points more than his opponent for much of the contest.
With Cross struggling to find his range on the trebles, Wright took advantage to race into a 3-0 lead thanks to a trio of 13-dart legs. Former World Champion Cross fought back and took the match all the way to a 12th leg, but after the former World Champion failed to take out 126, Wright found a last dart double five to condemn Cross to his first loss of the season.

"I made it hard work for myself, and Rob is never going to give you a game," said Wright. "Rob is a fantastic player so I'm happy to get the win against him. "I'm finding it hard work up there, I'm putting pressure on myself and I need to relax a little bit more."