Fallon Sherrock stole the show on Night Two of the 2020 Unibet Premier League as she drew with Glen Durrant in Nottingham on Thursday as Michael van Gerwen continued his winning start to the season.

Sherrock, who became a global sensation at Alexandra Palace in December by becoming the first woman to win matches at the World Championship, picked up where she left off at a packed out Motorpoint Arena. Starring as the first woman in Premier League history, Sherrock came agonisingly close to becoming the first Challenger to win a match in the competition.
A nervy start to the contest saw the first six legs shared with both players missing darts at doubles, before Sherrock took out 92 for a superb 12-dart break of throw. The next three legs all went with throw as Sherrock took out 46 to secure a draw, but three-time BDO champion Durrant fought back to take the match all the way to a 12th leg. With Sherrock waiting on 48 for victory, Durrant pinned double 16 with his third dart to maintain an unbeaten start to his debut Premier League campaign, ending hopes of a roof-raising finish for Sherrock. 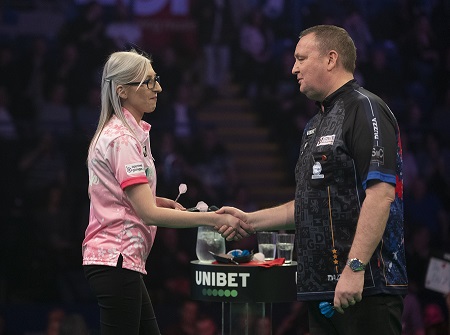 "I loved every minute of the experience, I'm so happy to get a draw," said Sherrock. "It was amazing, I'm so happy to have played well again in front of a big crowd and it was a privilege to play against Glen. "I want to thank everyone who came out to support me, I'm so grateful to them all. "I'm trying to make the most of all the opportunities I'm getting at the moment and I can't wait for everything else 2020 could bring."

Premier League newcomer Durrant, who got his maiden Premier League campaign off to a perfect start in Aberdeen on Night One, was left to rue 17 missed double attempts. However, the 70 checkout under immense pressure in the final leg maintained his unbeaten start to the season.

"All credit goes to Fallon there, that was the toughest game I've ever had," Durrant admitted. "It was a real challenge. I think playing Fallon on that stage was a lot harder than I maybe anticipated. "The crowd were fantastic, I want to make it clear that they didn't put me off at all." 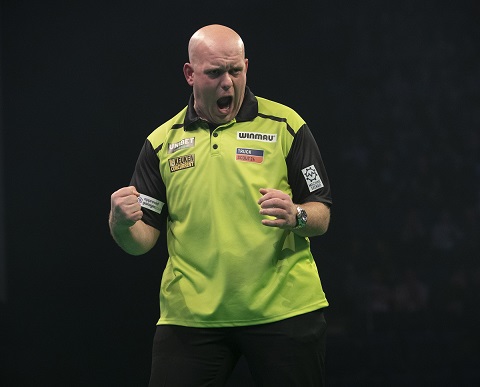 Five-time Premier League winner Van Gerwen is the only player to boast a 100% record following the opening two nights with an impressive 7-1 victory over Daryl Gurney. The world number one was at his dominant best, averaging 105.05 to blow away Gurney, who sits at the foot of the table with back-to-back defeats.

"I didn't make any mistakes tonight, and I had to because Daryl is a very consistent player," said Van Gerwen. "It's good but I know I can do better than this and I know there is more in the tank. "I think the crowd were superb tonight for all the players, we all want to perform for them. "I'm back where I belong and that's at the top of the table." 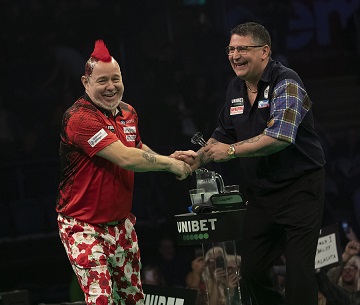 Scottish World Cup winning teammates Gary Anderson and Peter Wright played out an intriguing 6-6 draw.
The opening four legs all went with throw before Wright, who was struggling with an ankle problem, struck an 11-dart leg for the first break to go 3-2 up. The following three legs were all won in six visits or more as the two powerhouses of the sport struggled to produce their red-hot recent form, before Anderson found double 16 to go 5-4 in front. However, two-time Premier League winner Anderson was unable to find the decisive break of throw as World Champion Wright fought back, ending the match with a 12-dart leg to avoid beginning his campaign with back-to-back defeats. 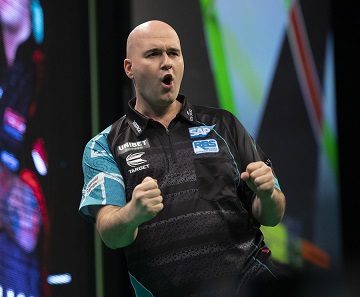 Last year's runner-up Rob Cross twice came from behind to defeat Nathan Aspinall 7-5 in a nip-and-tuck affair. In a game which never saw more than a leg between the pair, Cross trailed 4-3 but finishes of 116 and 112 proved decisive as he avenged his defeat to Aspinall in the 2019 UK Open final.

"I'm very pleased to win tonight, it was a hard game to win against an in-form player," said Cross. "I'm on a new path at the moment and I feel brilliant. I've lost almost three stone since the World Championship. "I'd been doing things wrong for the last couple of years so I decided it's time to look after myself. "I want the best I can from this game and to get that I have to do the right things on and off the stage." 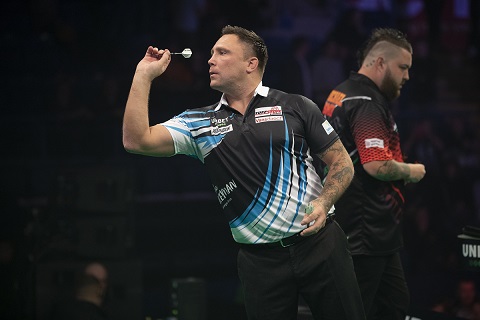 A night of comebacks and close encounters saw world number three Gerwyn Price recover from 6-2 down to salvage a point against Michael Smith.
Smith was at his fluent best in the first eight legs, averaging over 115, hitting two ten-dart legs and a 140 finish as he secured his first point of the campaign. However, the 2018 Premier League runner-up was unable to get over the winning line, missing two match darts as Price dug deep to win four successive legs to maintain his unbeaten star to the season.