Durrant battles back to draw with Van Gerwen on Night 14

Glen Durrant battled back from 7-5 down to rescue a draw against Michael van Gerwen on Thursday in Milton Keynes, as the battle to reach the Unibet Premier League Play-Offs continued with Night 14. 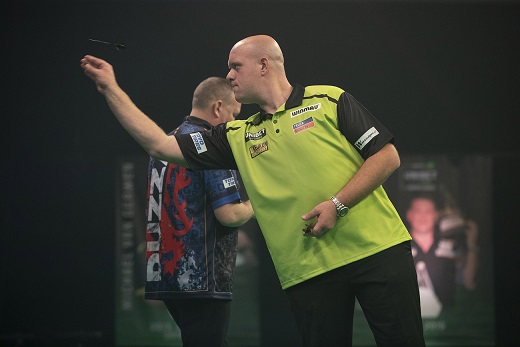 Having been outscored by a rejuvenated Van Gerwen for much of the contest, Durrant looked on the verge of his first loss to the world number one.
Van Gerwen, who came into the match on the back of four defeats in six, led from the fifth leg and landed a 108 checkout to seal at least a point at 7:5. However, the Dutchman, who stays outside the Play-Offs in fifth place, missed two match darts in the following leg, allowing Durrant to hit double 18 to take it the distance. Van Gerwen kicked off a gripping final leg with just 60 and Durrant punished with his fourth 180 to steal the darts before holding his nerve with a last dart double one with Van Gerwen waiting on 40. Having rescued an unlikely draw for the third time in four nights, the Premier League debutant stays top of the league and is still the only player assured of qualification for the Play-Offs.

"I just don't think players want to beat me this week," joked Durrant, who is now ten-games unbeaten in the Premier League. "What can I do? I take out my doubles when I get the chances. It puts me in a fantastic position right now. "I didn't feel much pressure coming into tonight but my scoring game wasn't quite there tonight. "The big carrot now is for me to win this league, the £25,000 bonus along with putting my name alongside the elite in Michael van Gerwen and Phil Taylor would mean a lot to me. "Mentally it's been a very difficult ten days making sure you don't let anyone down. It can be tiring."

As the top four race intensified at the Marshall Arena, Scottish duo Gary Anderson and Peter Wright cemented their places in the Play-Off spots as the night's only two winners. 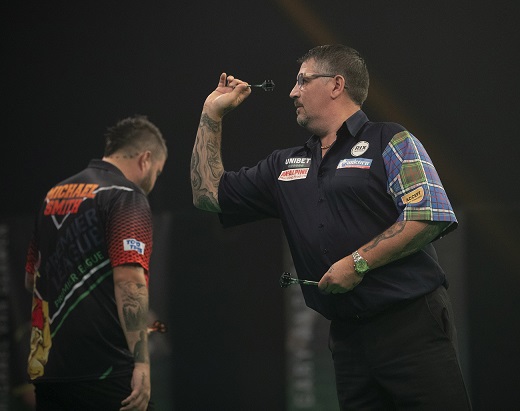 Second-placed Anderson all but confirmed his place in the Play-Offs as he blew away Michael Smith to record an 8-2 victory.
The two-time Premier League champion, who has now won five of his last six Premier League matches, averaged 102.25 as he continued his return to his brilliant best. Anderson never gave his opponent a way into the contest, hitting 50% of his checkouts, including a 154 finish, to put a significant dent in Smith's waning Play-Off hopes.

"It wasn't the greatest game tonight but obviously I'm happy to rack up another win," said Anderson. "There was a lot of pressure on Michael tonight. It's always hard playing against a friend but you've got to do what you've got to do. "I've got another two games to go, hopefully I can keep this standard up and keep the winning feeling going." 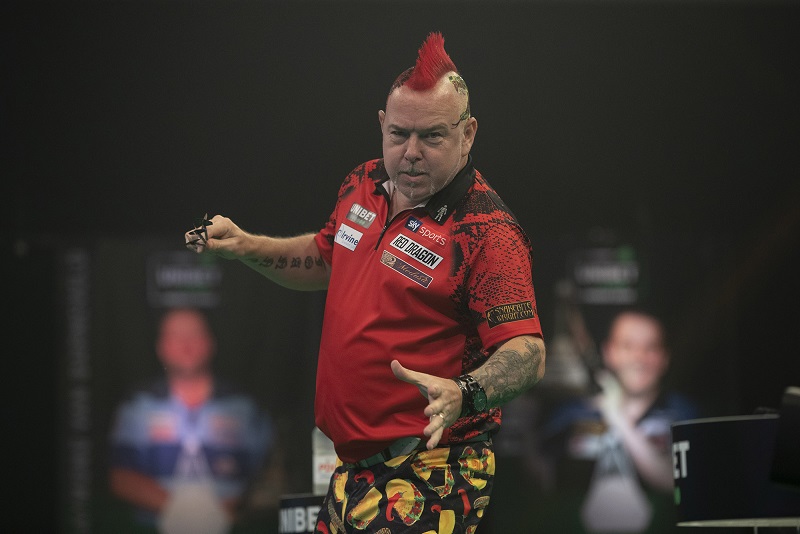 A clinical display from Wright saw him overcome Nathan Aspinall 8-5 to leapfrog his opponent into third place.
World Champion Wright missed just two double attempts, ending the match with a 103.11 average to boost his bid for a first Play-Off berth in three years. Aspinall led 5-3 but crucially missed darts at doubles 16 and eight to go 6-4 in front, as Wright punished with five consecutive legs.

"Nathan and I always have fantastic games, but it wasn't fantastic tonight," said Wright. "I'm happy with the win but not the way I played. "My doubling success comes from practice. I'm forever practicing those two-dart checkouts and it showed tonight. "Practicing simple things like that is what wins you games. Hopefully I can keep that going and be hard to beat." 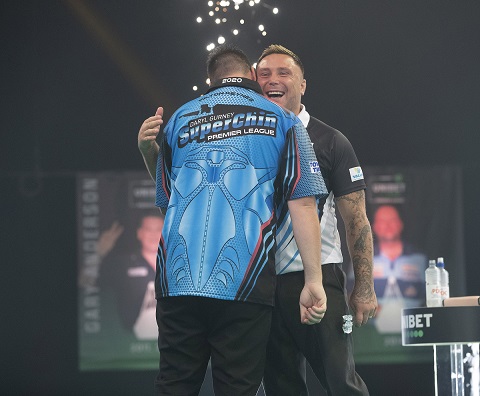 The opening game of the night saw Gerwyn Price held to his fourth draw of the campaign by a resilient Daryl Gurney, keeping the Welshman in sixth position.
A nip-and-tuck contest never saw more than two legs between the pair, though it was Price who came back from 4-2 down to lead 7-6. A 180 from Gurney in his opening visit of the final leg dampened Price's hopes of victory, and the Northern Irishman sealed a point in style with a 130 checkout. However, the result wasn't enough to keep Gurney's faint top four aspirations alive.

"I knew Daryl was going to come out firing tonight and I had to be on my game and I wasn't at the start," admitted Price. "I've bombed too many games in this Premier League. I don't seem to win when I should and tonight was another case of that. "It wouldn't surprise me if I ended up finishing fifth because of those missed opportunities. "It depends how other results go now but I'm going to try to win the last two and see where I end up."

Friday will see the penultimate night of league phase action take place, with another four matches including a battle between former Premier League champions Anderson and Van Gerwen.