Michael van Gerwen went some way to avenging his World Championship final defeat to Peter Wright, edging their Alexandra Palace rematch 7-5 on Night One of the 2020 Unibet Premier League in Aberdeen. 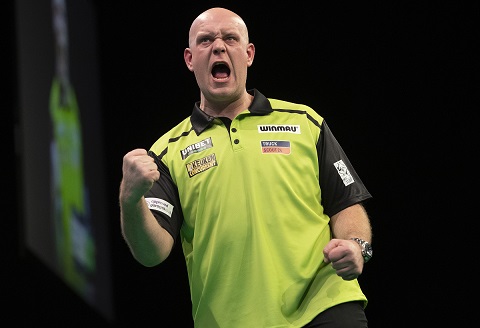 The 16th staging of the Premier League got underway in front of over 7,000 fans at the brand new P&J Live, with five-time Premier League champion Van Gerwen winning a thriller against Wright. A typically high-quality affair between the world's top two saw six ton-plus finishes landed, but it was Van Gerwen's 104.13 average which eventually proved too much for Wright to handle.
Wright, who famously dethroned Van Gerwen as World Champion on New Year's Day, got off to an ideal start with finishes of 120 and 80 to take a 2-0 lead, but Van Gerwen replied with checkouts of 120 and 106 to go 3-2 up. The next six legs all went with throw to put Van Gerwen 6-5 up, and the Dutchman struck the vital break of throw in the final leg of the match to get off to a winning start in his quest for a fifth consecutive Premier League crown.

"I think it went well tonight, I can't complain with how I played," said Van Gerwen, who crashed out of The Masters in round one last Friday. "I'm going through a tough time at the moment with getting used to my new darts. "I can do whatever I want in practice with any darts but it's different when you're on the big stage. "But the decision to change is something I needed to do for the long-term benefit of my career. "Of course I felt under pressure tonight not being World Champion, but I've put a lot of work in and I think I can build from here." 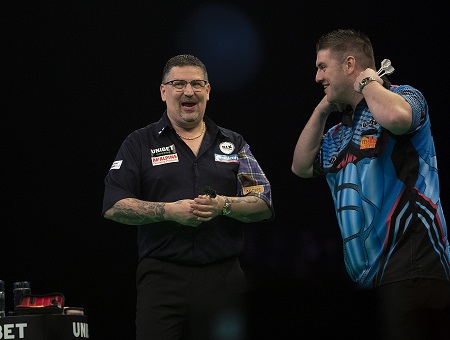 "Tonight felt like the first time I ever played in front of a big crowd, I'm still shaking," Anderson admitted. "I was struggling against Daryl, I can never get a rhythm against him, but I changed it up and thankfully it worked. "I'm giving myself three months to get my game back, it feels like I'm learning the game again but I'm getting there. "The crowd tonight was incredible, it's a real pleasure to play in amazing venues like this in front of your home crowd. I'm going to enjoy tonight."

It was a perfect start to life as full-time Premier League players for Nathan Aspinall and Glen Durrant, who recorded wins over John Henderson and Michael Smith respectively. 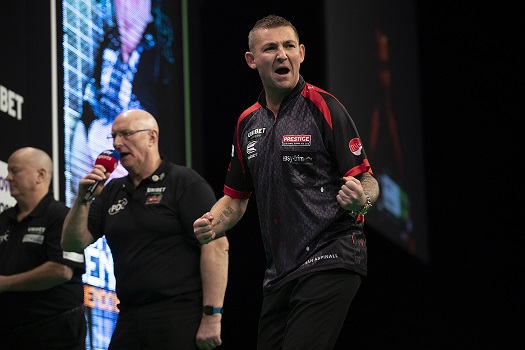 Henderson's highly-anticipated return to Aberdeen was spoiled by Aspinall, who cruised to a 7-3 victory over the Scot.
Appearing as the first of nine Challengers following his famous draw with Van Gerwen in 2019, Henderson got off to a slow start and never recovered as Aspinall picked up a win in his first match as a Premier League player. With Henderson waiting on 96 to go within a leg of Aspinall, the UK Open champion landed a trademark 170 checkout to halt any hopes of a Henderson fightback before seeing the game out.

"It's a bit of a strange feeling, I'm delighted to win but I'm not happy with how I played," Aspinall admitted. "After what we saw in Aberdeen last year I was expecting the worst in terms of my crowd reception but it wasn't anywhere near as bad as I thought it would be. "I think they were a bit flat because John didn't perform tonight, I feel for him because he's a great guy but I have a job to do. "I didn't play well either to be honest, I threw three good darts in the match and they were to take out the 170 which won me the game. "I think playing The Masters last week was an advantage for me, it meant I got the winning feeling back, whereas John hasn't played on stage for a couple of months."

Meanwhile, Durrant missed just two darts at double in a ruthless 7-3 defeat of 2018 Premier League runner-up Smith.
The three-time BDO Champion defied a ten-point deficit in the averages to lead 3-2 and, after Smith missed crucially missed two darts at double in leg seven, Durrant extended his lead to three legs at 5-2. From there, Durrant never looked back, clinically seeing out the match to taste victory in his first outing as a full-time Premier League player.

"It's a great start, I beat an amazing player tonight on one of the biggest occasions of my career," said Durrant, who will face Challenger Fallon Sherrock in Nottingham on Night Two. "Michael makes the game look effortless and I didn't mean to upset his rhythm with my slower play. "I was very nervous today, even from early this morning but I had a lovely phone call from my wife before I played and that really helped me. "Three years ago I was watching the Premier League on a tiny TV at a club in Stockton - people were saying to me 'you could be playing in this one day Glen' and now I'm here - it's an amazing story. "My only target for this year's Premier League is not to finish last and make sure I make it past Judgement Night." 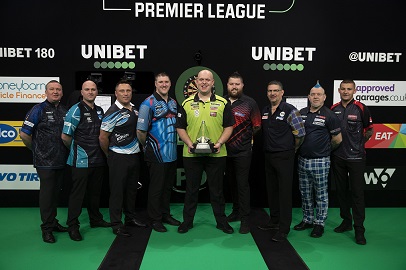 The final game of the night saw Gerwyn Price recover from 6-4 down to salvage a 6-6 draw with Rob Cross. After taking out 124 to open up a 4-2 lead, Price was pegged back as Cross won four legs in succession to secure a point. A 130 checkout from world number three Price sparked the Welshman back into life and he backed it up with a 13-dart leg to take a share of the spoils.