MICHAEL VAN GERWEN won his fifth Unibet Premier League title at The O2 in London on Thursday, defeating Rob Cross 11-5 in the final.

World number one Van Gerwen recorded a 10-7 win over Play-Offs debutant Daryl Gurney in the semi-finals to make it through to his seventh successive Premier League final. There, the reigning World Champion got the better of Cross in the battle of the world's top two to win a record-equalling fourth consecutive Premier League crown and the 250,000 pound top prize.

"This feeling of winning the Premier League never changes, it means a lot to me," said Van Gerwen, who had already secured the 25,000 pound league leader's bonus after topping the league table for a seventh straight year. "This year has been an amazing tournament, and at times a difficult tournament for myself, but in the end I came through and that's all that matters. "It's really tough because you have to perform week-in week-out for 17 nights, travelling every week and keep preparing yourself for the next game. "The last few months have been hard for me but to lift this trophy at the end of it makes it all worthwhile. "Rob is a gentleman and a top player who pushed me all the way. He's been chasing me all year but it wasn't quite enough for him this time but he is a strong rival for the future." 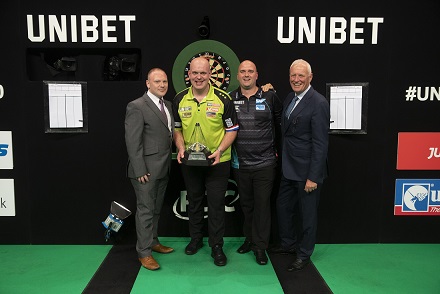 The final between the top two from the league phase began with a break of throw in the opening leg from Van Gerwen, who went on to take out 90 for a double-break and a 4-1 lead. The Dutchman, who ended the match with five 180s and a 103.36 average, then landed a 112 checkout for a 5-1 advantage, before Cross rallied and took the next three legs to make it 5-4. The tenth leg proved to be a pivotal point in the contest as former World Champion Cross fired wide with three darts at double to level, allowing Van Gerwen to take out 74 to make it 6-4 at the interval.
After the break, Van Gerwen poured more water on the Cross fire with a 72 checkout to break throw and put daylight between the pair, which he followed up with an 11-dart hold of throw. Cross found double six to stop the rot and reduce the arrears to 8-5, only for Van Gerwen to reel off the final three legs, sealing victory in style with a sublime 130 checkout to tearfully retain his title. 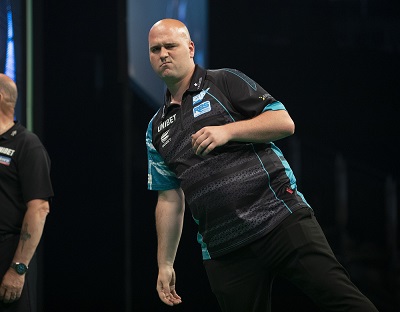 "The Premier League this year has been brilliant for me, I've loved performing in front of amazing crowds every week," said Cross, who made it through to his first Premier League final with an authoritative 10-5 win over 2009 champion James Wade. "I didn't play too badly in the final, but I still believe I can play a lot better and there's so much more to come from me. "Michael is a phenomenal player and he deserves to win this title, but one day I will get him. "I had so much adrenaline pumping through me and it probably cost me the game at 5-4 when I missed those crucial doubles. "I'm going to keep moving forward for the rest of the year and I believe I can win things."


Gurney had won through to the Play-Offs in his second season competing in the Premier League, but admitted: "I feel like I've missed an opportunity - Michael was there for the taking and I've let him off. "It wasn't a classic but it was entertaining because we were both trying so hard. I was hanging in there but the way I played was the way I was practising. "My aim this year was to improve on what I did last year and I've done that."