DARYL GURNEY picked up a stunning victory over Michael van Gerwen, whilst Raymond van Barneveld secured his first win of the season on a pivotal night of Unibet Premier League action at the Mercedes-Benz Arena in Berlin. 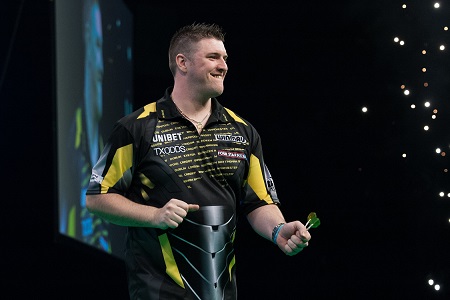 The tournament's return to Germany featured a vital win for Gurney to lift him away from the bottom of the table as he stunned the World Champion 7-5.
Trailing 2-0 early on, the signs looked ominous for Gurney, but after a missed dart from Van Gerwen in the third at tops, the Northern Irishman capitalised to get himself back in the game. At 3-2 down, Gurney then put together a run of three straight legs to lead 5-3 and take command of the tie. A superb 86 checkout in two darts guaranteed a point for Gurney, and despite more pressure from Van Gerwen as he moved within one, the Players Championship Finals winner got over the line to secure a vital win.

"I'm delighted with the result, but in all honesty I didn't play as well as I know I can," said Gurney. "I was battling with myself to find the treble 20 all the way through, but once I went 2-0 down I hit a few big scores and I know if my first dart is right I can beat anybody. "Going into the game I knew I needed to get a point to keep myself out of the elimination picture going into next week so to get the win is a great result." 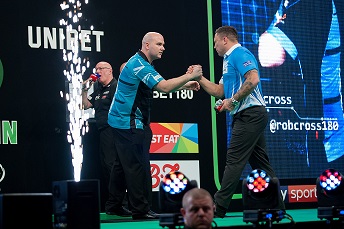 The beneficiary of that result was Rob Cross, who moved two points clear at the top of the table as he produced a very strong display to beat Gerwyn Price 7-4.
A 104 average from the former World Champion continued his fine form as he dominated from the start against the Welshman. After Cross won the opening two legs, Price started to respond and get a foothold in the game. But he was always chasing Cross throughout, and missed a chance to level at 5-5, allowing the world number two to secure a point before winning the next leg to wrap up the victory.

"I'm really happy with the result tonight, it felt like a bit of a graft in places but I got the job done," said Cross. "A couple of times I broke throw and gave him a freebie to break straight back so I need to work on keeping my focus in every leg. "I'm really happy in the Premier League this year, everything is good at home with my family, my sponsors are supporting me and life couldn't be any better right now." 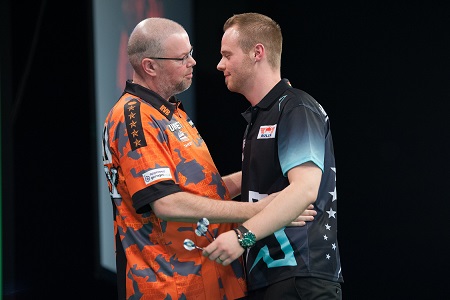 Max Hopp's Berlin homecoming was a disappointing one as the Contender succumbed a 7-3 defeat to Raymond van Barneveld in what was a vital win for the five-time World Champion.
A first win of the season for Van Barneveld brings him within one point of Michael Smith going into the crucial Rotterdam double-header and Judgement Night next week. A 104 checkout in the opening leg for Hopp was met by raucous cheers by the 10,000 strong German crowd, but the Dutchman was quick to respond as he used his experience to stretch into a 4-1 lead. Hopp looked to regain some composure on the big stage as he clinched back-to-back legs, including a 96 checkout, to move within one of the 2014 champion. However, a stunning showpiece 170 finish from Van Barneveld followed to silence the home crowd and put the Dutchman back in command. Hopp never recovered, and more costly misses at doubles saw Van Barneveld clinch the remaining two legs for a potentially pivotal two points.

"I didn't play my 'A game' tonight but of course I'm happy to get the win," said Van Barneveld. "When I saw Michael lost I knew I needed to win to keep my hopes of avoiding elimination alive and thankfully I did. "I was struggling at points in that match, the 170 came at a good time for me and it felt really good. "Next week I'm playing at home, I can't wait. I love this game and now I'm feeling more energised and hopefully I will bring my 'A game' next week." 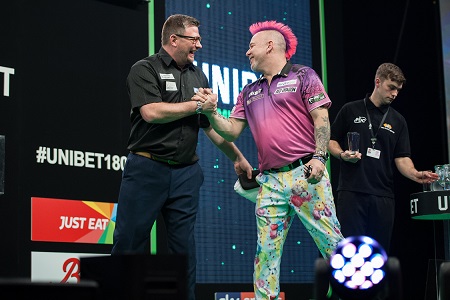 Peter Wright will feel mightily relieved to escape with a point after rescuing a draw against James Wade, having once led 5-2.
The Scotsman started strongly, breaking throw twice and firing six perfect darts on his way to the three leg advantage. But that was when it all started to go wrong for Wright, as a host of missed darts saw Wade capitalise and run off four straight legs to move onto the brink of victory. Nevertheless, Wright threw two 140s before completing a 74 checkout in a crucial last leg to hold throw and snatch a point. 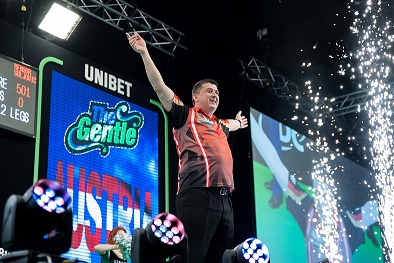 Mensur Suljovic put in one of his most dominant Premier League performances as he blew away Michael Smith 7-2 to move into the Play-Off places.
Smith won the opening leg, but was then left in Suljovic's wake as the Austrian ran away with the tie with five legs in succession. A second leg followed for Smith to make it 5-2, but that was all the change he was getting out of Suljovic as a 77 checkout secured a point, before he broke again in the next for a resounding win.

"It's a brilliant feeling," said the Austrian. "Michael is such a good player so to win 7-2 is very big for me. I love playing in Berlin, I won here last year too and it was a fantastic night."