MICHAEL VAN GERWEN regained his place at the top of the Unibet Premier League table with a 7-2 victory over Gerwyn Price at Nottingham's Motorpoint Arena on Thursday. 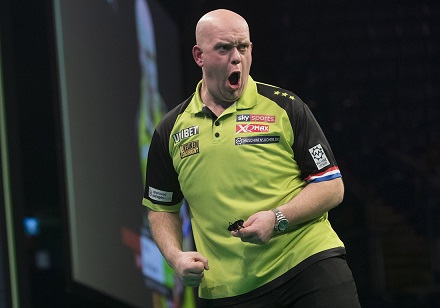 Van Gerwen came into Night Six of the campaign under pressure following defeat to James Wade and a draw with John Henderson, but returned to winning ways against in-form Welshman Price. A cagey start saw both players struggling to find their usual high-scoring power, but it was Van Gerwen who edged his way into the ascendancy at 4-2. The Dutchman lit up the contest with a majestic 132 finish on the bullseye to make it 5-2, before sealing the deal with legs of 13 and 14 darts to condemn Price to his first loss of the season.

"The main thing tonight was to get back to winning ways, so I'm happy with that even though the performance wasn't fantastic," said Van Gerwen, who has won all 14 of his contests with Price. "For some reason tonight both Gerwyn and myself struggled to play our best game which is a shame but I got better towards the end of the game and ended up winning comfortably. "Of course I like to be top of the league and I know I have to work hard to stay there. I have to be at my best every week now to keep my record of topping the league phase every year since my debut season." 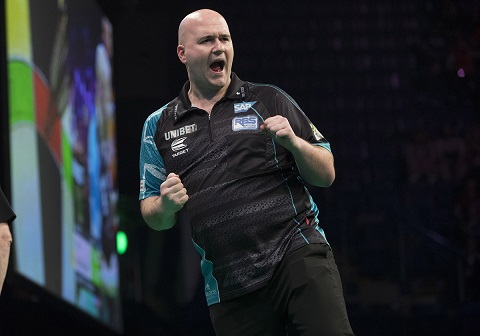 Rob Cross kept the pressure on Van Gerwen at the table's summit with a 7-3 win over departing Dutchman Raymond van Barneveld, with Cross only behind Van Gerwen on legs won against throw.
An exceptional performance from last year's semi-finalist Cross saw him kick off the game with 12 and 13-dart legs, but Van Barneveld fought back with two successive 25 finishes to level. That was as good as it got for the 2014 Premier League Champion, as Cross proved too strong, landing a 129 checkout on his way to winning five of the next six legs to claim his fourth success of the campaign, while Van Barneveld remains rooted to the foot of the table.

"I'm happy with the win but I think I got a bit complacent when I got in front, and started to mess around a bit at the end," said Cross, who kept up his record of never being defeated by five-time World Champion Van Barneveld. "I'm really enjoying my darts at the moment, my family life is brilliant, the routine is there and I'm feeling more comfortable every week. "As long as I'm feeling happy in myself I know the results will come. Now I want to raise the bar and keep on pushing myself and go all the way in this Premier League." 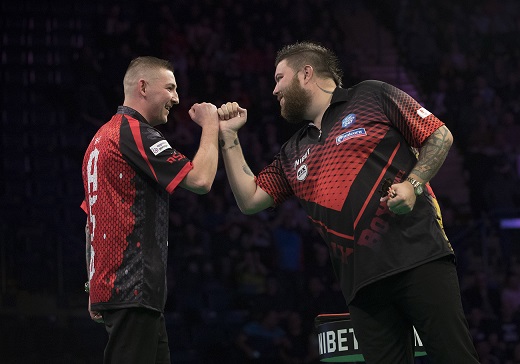 It was a tough welcome to Premier League life for recently-crowned UK Open Champion Nathan Aspinall, as he went down to a comprehensive 7-2 defeat at the hands of 2018 finalist Michael Smith.
Ten missed doubles in the opening three legs from Contender Aspinall allowed Smith to punish and take a 3-0 lead, before a mid-match rally from Aspinall saw him land a 158 checkout to bring it back to 5-2. However, Smith was not to be denied and won it in style with a 127 checkout, his second ton-plus finish of the match, to double his tally of wins in the 2019 campaign and climb away from the elimination zone.

"I was trying so hard out there to make sure I wasn't the first player to be beaten by one of the Contenders," said Smith. "I don't think I played well but the only thing that matters is getting the two points to keep me clear of the relegation zone. "My goal is to make sure I get past Judgement Night and then make a real push towards the top four and maybe go one better than last year." 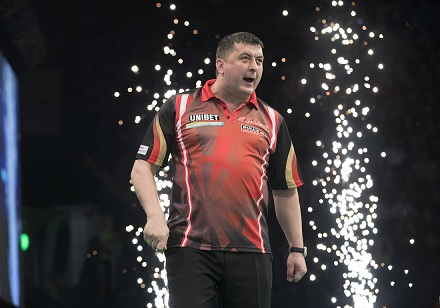 Mensur Suljovic also made a positive step away from the drop zone, producing his best performance of the campaign to claim a 7-3 victory over James Wade, who topped the table heading into the night's action.
The opening two legs went on throw, before three consecutive breaks saw Suljovic take a 3-2 lead, and he followed it up with an 84 checkout to open up a two-leg cushion for the first time in the match at 4-2. The Austrian went on to win three of the next four legs, ending the contest with a 101.38 average, as he picked up his second win of the season to steer himself away from the relegation picture. 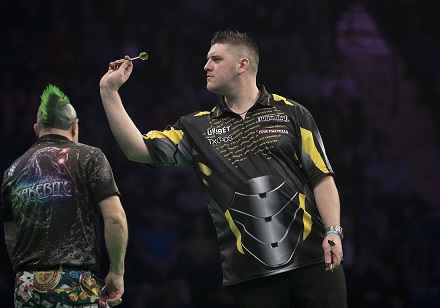 The final game of the evening saw a gutsy Daryl Gurney survive a match dart as he battled back from 6-3 down to draw 6-6 with Peter Wright.
The opening five legs went with throw, before Wright punished Gurney's seven missed darts at double to take a 4-2 advantage. At 6-3, Wright looked to be on his way to a third win in four games, only for Gurney to fire in three legs of 15 darts or less to earn a hard-fought point and end a run of two defeats, with the Northern Irishman now three points clear of Van Barneveld.