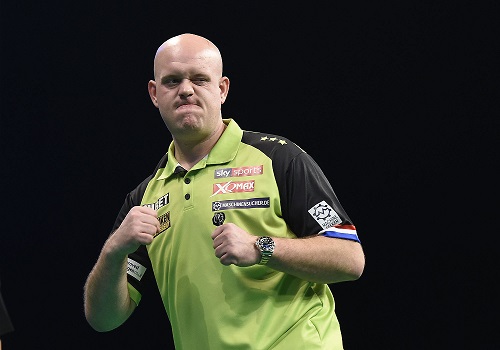 MICHAEL VAN GERWEN maintained his winning start to the 2019 Unibet Premier League with a resounding 7-2 victory over Rob Cross at Dublin's 3Arena on Thursday as Irish ace Steve Lennon got a taste of big-stage action.

Night Three saw four-time Premier League champion Van Gerwen get off to a flying start, firing in a hat-trick of 14-dart legs along with an 11-darter as he raced into a 6-0 lead in the battle of the world's top two. Former World Champion Cross was unable to cope with the Dutchman's relentless pressure, but after Van Gerwen missed two darts at double four for a tenth whitewash in Premier League history, Cross stopped the rot with back-to-back legs. However, Cross was unable to sustain a comeback attempt as world number one Van Gerwen proved too strong, eventually finding double four to make it a hat-trick of wins and continue his perfect start to the campaign.

"I'm happy with the win but I'm a bit annoyed with myself, I think I could've played better as Rob could have, but maybe that was because of the pressure of playing against me," said Van Gerwen, who defeated Michael Smith and Mensur Suljovic in the opening two nights. "I can't really complain because I won the game but you have to be critical of yourself and I shouldn't have missed all those doubles at the end. "It would be nice to win every game this season because no one has ever done that before but I think that's nearly impossible. "People think it's easy but I have to work hard to produce performances like this, there's no time to rest and I have to perform week after week." 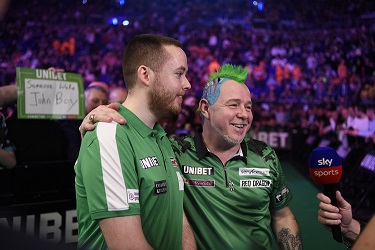 Peter Wright maintained his unbeaten start to the campaign as he came back from 3-0 down to see off Contender Steve Lennon 7-5.
Buoyed on by a rousing reception from the Dublin crowd, Carlow's Lennon got off to a flying start as he took out a 105 finish to take a 3-0 lead, and missed two darts to go 4-0 up in a moment which proved to be the turning point in the contest. Wright punished Lennon's missed darts at double to reel off five successive legs, before the youngster stopped the rot to take the match the distance, with Wright producing a strong final leg to seal his first victory in this year's tournament.

"I was happy to see play Steve play so well because he was under a lot of pressure in front of his home crowd," said Wright. "He was amazing in the first few legs and I was wondering if I was going to get a chance. "So far this season I've played former World Champion Rob Cross and World Championship runner-up Michael Smith and now Steve Lennon in front of his own fans so I'm very happy with my start to this year's Premier League." 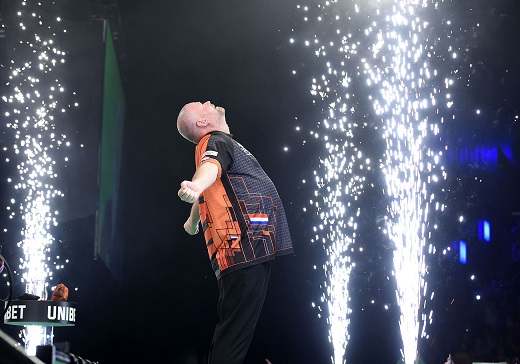 An emotional Raymond van Barneveld battled back from 5-1 down to earn a draw against Mensur Suljovic in his final Premier League appearance in Dublin.
Crowd favourite Van Barneveld had to come back from four legs down to earn a point for the second consecutive week, as German Darts Master Suljovic looked to be cruising to a first league win of the year. Departing Dutchman Van Barneveld punished Suljovic's missed doubles with two 14-darters and a 13-darter to make it 5-5. Suljovic regained the lead, but the following leg saw the Austrian miss a match dart, allowing Van Barneveld to step in and find double eight with his last dart in hand for a 92 checkout to secure his second point of the season.

"The crowd were amazing, I love playing in Dublin and I'm happy that I managed to fight my way back into that game," said Van Barneveld. "The receptions I get every week are so special to me, but I want to give them more back. I'm battling every single week, practising every single day to give the crowd 'their Barney'. "The motivation is there and I cannot play darts without these amazing crowds, and I want to get better through the season for them." 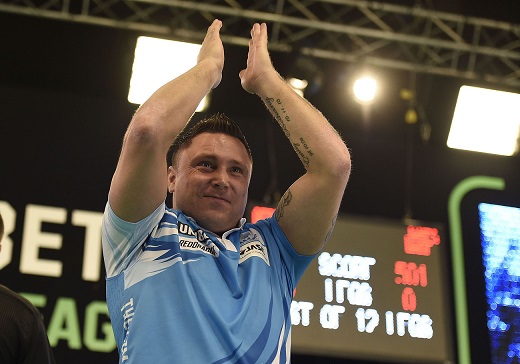 An explosive start to the night saw Gerwyn Price and James Wade produce ten 180s in their six-all draw.
European Champion Wade took control of the match as he went into a 5-2 lead, landing an 11-darter in leg seven, only for Price to stage a spirited comeback. The Welshman found the bullseye for an 88 checkout to break throw and level at 5-5, and then took the lead to preserve his unbeaten start to the competition, only for Wade to land a stunning 129 checkout to earn a share of the points.

"Raymond pinched a point off me last week and I did the same to James this week," said Price. "I'm scoring really well at the moment but I just didn't do that today so I have to be happy to get out of that one with a point." 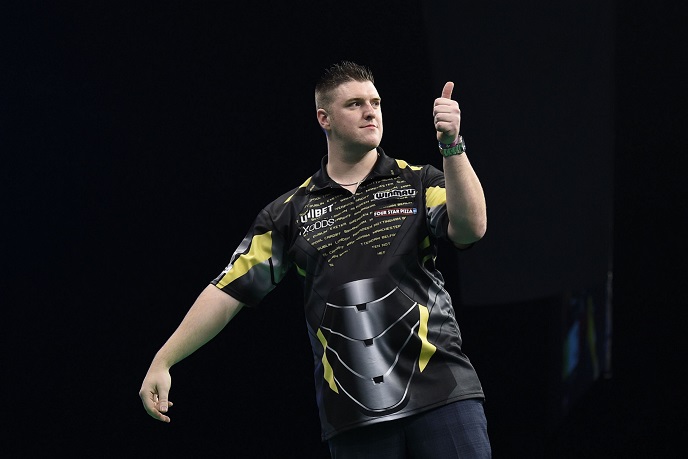 Daryl Gurney came through a see-saw tussle with Michael Smith to win 7-5 and make it back-to-back victories for the Northern Irishman.
2018 Premier League finalist Smith took a 2-0 lead, before Gurney powered back with four successive legs, including a magnificent 140 finish, to move 4-2 up. Smith replied with three legs in a row to go 5-4 up, but it was Players Championship Finals winner Gurney who perfectly timed his sprint to the finish by winning the final three legs without allowing Smith an attempt at double for a 7-5 success.