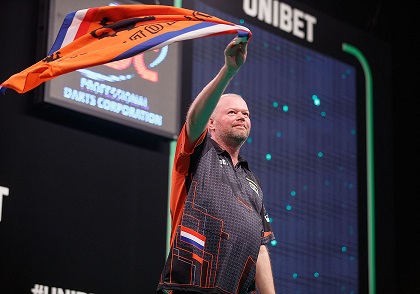 RAYMOND VAN BARNEVELD battled back from 6-2 down to earn his first point of his final Unibet Premier League campaign against Gerwyn Price on Night Two at The SSE Hydro in Glasgow.
Grand Slam of Darts champion Price flew out of the traps into a 4-1 lead, and soon found himself within a leg of victory at 6-2, only to miss four darts across the next two legs to allow Van Barneveld back into the contest. Starring in Glasgow for the last time before retirement, the Dutch ace made it four legs on the spin to complete a remarkable comeback.

"From 6-2 you have to be happy with a point, I couldn't have done it without the crowd - they were amazing as always," said Van Barneveld. "I feel really proud of myself to get that point, I want to enjoy my last Premier League campaign and I think tonight was the start of that." 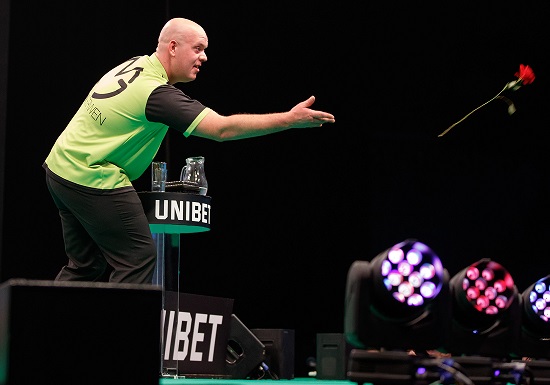 Four-time Premier League champion Michael van Gerwen became the only player to secure back-to-back victories as he overcame Mensur Suljovic 7-3.
World number one Van Gerwen raced into a 3-0 lead, before Suljovic showed resistance to get himself back within a leg of the Dutchman at 3-2. That was as close as the World Matchplay finalist came to restoring parity, as Van Gerwen reeled off four of the next five legs to go top of the table.

"I wasn't playing well in practice and I wasn't at my best tonight but a win is a win and overall I'm happy with my game," said Van Gerwen. "I did what I had to do at the key moments and now I'm top of the table I want to stay there, but there's a long way to go." 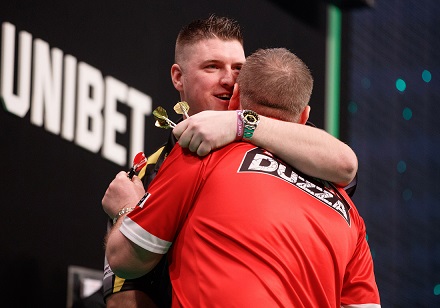 Clinical finishing proved to be the difference for Daryl Gurney, missing just two darts at double as he defeated three-time Lakeside Champion Glen Durrant 7-3.
Two world class 121 finishes from Players Champion Gurney helped him on his way to a 5-1 lead, before Durrant missed two darts at double 18 and was ruthlessly punished by Gurney who tidied up 78 in two darts to secure a point. Durrant rallied and found his mark on the doubles, taking out 81 to break throw and make it 6-3, but Gurney kept up his consistency on the doubles to find double 16 at the first attempt to get his first two points of the season on the board.

"I know I can outscore anybody but I've been doing a lot of practising on my finishing and I think that showed tonight," said Gurney. "I really needed the win to get some points on the board because if I'd lost tonight then the pressure would've been on me, so now I can look to kick on and do some damage in this competition." 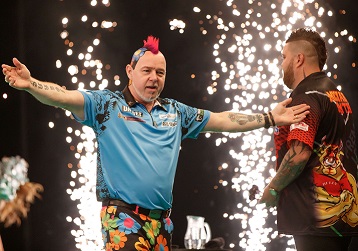 An entertaining opening match saw Peter Wright fight back from 4-1 down to earn a 6-6 draw against Michael Smith.
2018 finalist Smith, who landed six 180s in the contest, stormed into a commanding three-leg advantage and was averaging over 20 points more than his opponent. Home favourite Wright then sprung into life, winning four of the next five legs to make it all-square at 5-5 after Smith missed six darts to secure a point. Wright found double 16 once again to go in to the lead and guarantee a point, but Smith held his nerve in the final leg, finding double six with his last dart in hand to ensure a share of the spoils. 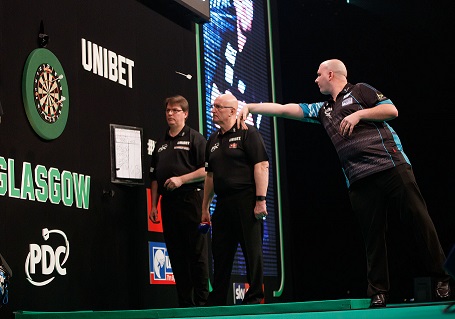 Former World Champion Rob Cross produced a ton-plus average for the second consecutive week in his 7-4 triumph over James Wade.
Cross, who reached the Play-Offs of last year's tournament, missed doubles early on in the piece and was typically punished by a clinical Wade but fought back to level at 3-3. World number two Cross hit the bull for a magnificent 85 finish to go 5-3 in front, and that turned out to be the turning point as Cross made no mistakes from thereon in, ending the match with an impressive 102.58 average.

"I missed a few darts early, maybe there were a few nerves but I've been working hard on my game and it's paying off," said Cross. "I lost my smile last year, everything was difficult for me in my first Premier League season, it's a ruthless competition but this year I'm playing properly and I'm enjoying it."