ROB CROSS jumped back to the top of the Unibet Premier League table after Michael van Gerwen was stunned with an 8-5 loss to Daryl Gurney in Manchester.
Van Gerwen's win over Cross in Cardiff a fortnight ago had seen him overtake the 2018 World Champion in the battle for the 25,000 pound league leader's bonus. However, Cross' 8-1 rout of Michael Smith at The Manchester Arena was followed by a brilliant Gurney display as the Northern Irish ace took a 4-0 lead on his way to victory over Van Gerwen. 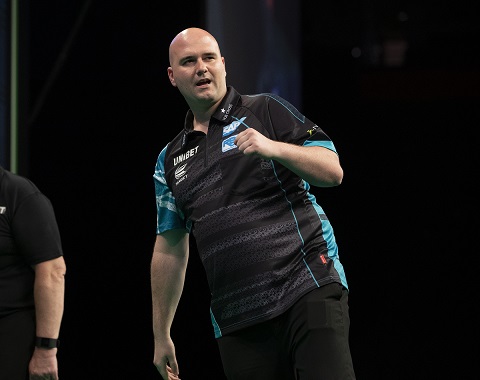 Cross now sits a point clear going into the final two league nights, leaving him in pole position to end Van Gerwen's record of topping the pile every year since his 2013 debut after averaging almost 103 in a clinical display at The Manchester Arena.
Smith had reached the Premier League final last May before losing to Van Gerwen, but an eighth defeat of this season saw his Play-Off chances ended, with Cross now all but assured of his place at The O2 on May 23. He took the opening five legs without reply, checking out finishes of 101, 78, 71 and 68 in the process, before Smith finished 68 himself to get off the mark in the sixth. Cross, though, wasted no time in wrapping up the points with three successive 11-darters which sealed his ninth win of the season.

"I'm really pleased with my performance," said Cross. "I scored well in placed and my finishing was the catalyst to get me an early lead. "It was important for me at 5-0 too to maintain my concentration, and when I lost a leg I got a good reaction from myself. Once I started to spread my wings at 5-1 I started to score like I can. "It's the tightest Premier League we've ever had and I want to keep my momentum going in the last two games ahead of the Play-Offs. It's crunch time now." 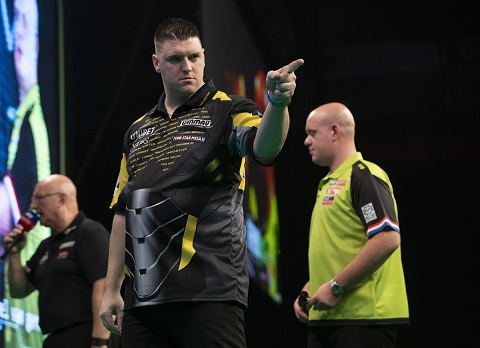 Gurney completed a Premier League double over Van Gerwen with an 8-5 triumph in their Manchester contest as he followed up his Berlin win over the World Champion with another fine display.
Gurney raced into a four-leg lead, taking out 105 and 76 for breaks of throw, before a 127 checkout from Van Gerwen got the reigning champion off the mark. Double eight saw Van Gerwen take a second leg before Gurney restored his four-leg cushion, and even a 130 checkout from the Dutchman was unable to stop his rival securing at least a draw at 7-4. Van Gerwen finished 100 to keep his hopes alive in leg 12, but tops for Gurney sealed a key win as he stays a point away from the top four.

"Michael's the best player in the world so it means a lot to me to beat him again," said Gurney. "To beat him twice in one season is a nice record to have. "I don't panic any more against him now, where I maybe tried too hard to beat him in recent years. I needed to get something out of the game and luckily I came away with the two points. "If I can go into my next two games with the same temperament I could win them, and if I can get into the top four I will be very happy." 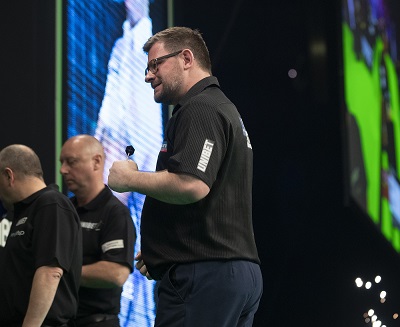 James Wade sits in third place after overcoming Gerwyn Price 8-4 in a key top-four battle which leaves the Grand Slam of Darts champion two points adrift of the Play-Off places.
Finishes of 61, 73 and tops helped Wade into a three-leg lead before Price kick-started his challenge with an 11-darter. Wade pulled clear at 5-2 and then took out 122 on the bull and 81 on double 12 to secure at least a point at 7-4, before tops secured two crucial points. 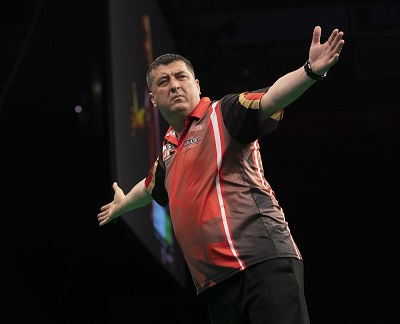 Mensur Suljovic maintained his Play-Offs challenge and ended Peter Wright's feint hopes of reaching the top four with an 8-6 victory from their contest to move himself into fourth place.
The Austrian opened the tie with a 144 finish and led 3-0, with a 130 combination from Wright only stemming the tide briefly as Suljovic opened up a 5-1 lead. Wright, though, took out double ten, 80 and 100 as he pulled back to 5-4, with Suljovic edging a key leg to deny the Scot a chance to level before sealing at least a point at 7-5. Wright took out 110 to force a deciding leg, but Suljovic sealed victory in style by following three 140 scores with an 81 finish for a 12-darter.

"It's a brilliant win for me," said Suljovic, who moves onto 17 league points to move into the top four. "It's a good feeling to Peter Wright because at 5-1 he came back, so I'm happy to win. "The Premier League is brilliant and I've nothing to lose. I will do my best and I hope I can get into the semi-finals."