MICHAEL VAN GERWEN remains a point clear at the top of the Unibet Premier League table following a high-quality draw with James Wade on a night of three stalemates at Arena Birmingham on Thursday. 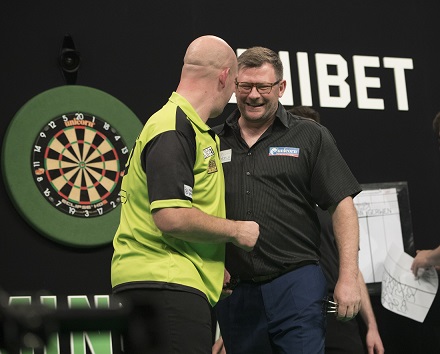 Van Gerwen was celebrating his 30th birthday as he took to the stage in Birmingham, but was given few presents as a clinical Wade chased a Premier League double over the reigning champion.
Wade took out back-to-back 121 finishes as he came from a leg down to lead 2-1, while Van Gerwen finished 117 and 107 as he remained level after ten legs. 2009 Premier League Champion Wade finished double ten and then broke with a 14-darter to seal at least a point at 7-5 only to see the World Champion take the final two legs for a draw. Van Gerwen ended the tie with an average of almost 107 and finished seven doubles from ten attempts, while Wade finished 7/11 and averaged nearly 104 as he remains in third place.

"It's a point but I can only blame myself for that but it was a good game," said Van Gerwen. "I broke his throw straight away but he had two phenomenal 121 finishes. He was throwing on confidence and feeling, and it was tough but a draw wasn't too bad and I can't really complain." 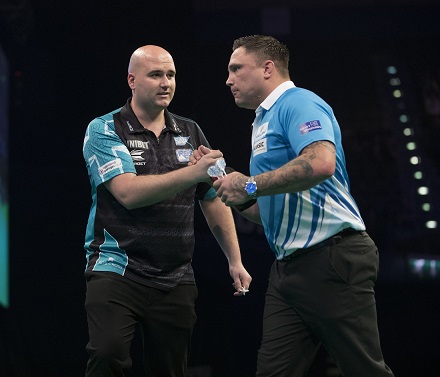 Van Gerwen sits one point clear of Rob Cross at the top of the table, after the former World Champion came from 7-5 down to claim a point against Gerwyn Price, who missed four match darts in a dramatic conclusion to their contest.
Cross defied a 101 finish from the Welshman with checkouts of 120 and 108 as he moved 3-1 up, only for Price to take out legs of 12, 13 and 14 darts and a 90 finish to lead 5-3. The Grand Slam of Darts champion held throw across the next four legs to secure at least a draw at 7-5, only to miss three match darts in leg 13 and one more in the decider as Cross claimed a share of the spoils.

"It's a valuable point for me," said Cross. "It wasn't my best game in the Premier League this year but I got the draw. "I expected Gerwyn to hit the winning double and he would have deserved it, so it's nice to get a bit of luck for once." 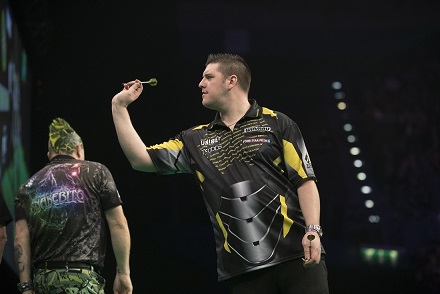 Daryl Gurney improved his Play-Off hopes with an impressive 8-4 win over Peter Wright, averaging almost 100 and finishing three ton-plus checkouts amongst eight doubles from 14 attempts.
Wright took the opening two legs to gain the early advantage, only for Gurney to respond with checkouts of 104, 86 and 101. The Scot took out 124 on the bull as he levelled in leg eight, but double ten edged Gurney back in front before a superb 12-darter broke throw, and he took the next two legs to complete a fine win. Gurney now sits just a point adrift of the top four as he continues his bid for a first appearance in the Play-Offs.

"It was a must-win game for me so it's good to get the win," admitted Gurney. "I put a lot of pressure on myself going up there but I found my range after four or five legs. "I've still got work to do and I probably need to get five points from my remaining three games, but I'll be trying my hardest to get to the Play-Offs." 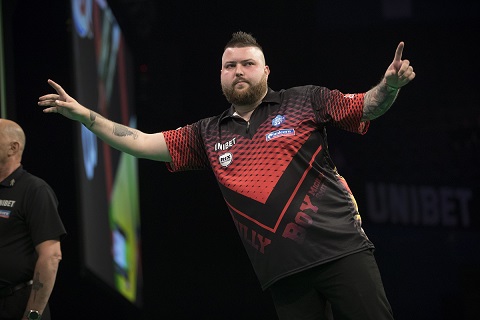 Mensur Suljovic battled back from 6-2 down to claim a crucial draw with Michael Smith to open the night's action in Birmingham.
2018 Premier League finalist Smith opened the game with a 180 and led 2-0 and 3-1 before three successive legs saw him take a four-leg cushion. However, Suljovic finished 120 and 84 to begin his fightback, winning four straight legs to level and then taking out 116 to move 7-6 up.
Smith, though, held his nerve in the deciding leg to land a third-dart double eight to claim a point which leaves him five points adrift of the top four with three games to play.

"I knew it was going to be hard to get into the top four and I had to win today, but at 6-2 I fell asleep and let him in," admitted Smith. "I've given up on getting through but I want to finish the season well and get my game back to where I want it to be."

The point moves Suljovic a step closer to securing a Play-Off place, and the Austrian said: "I'm so happy. It's very good for me to come back from 6-2 behind. "Michael played brilliant darts but I never give up and I'm in good form."