MENSUR SULJOVIC was eliminated from the Unibet Premier League on Judgement Night on Thursday with a 7-4 defeat to Michael van Gerwen in Liverpool, as Michael Smith whitewashed Raymond van Barneveld. 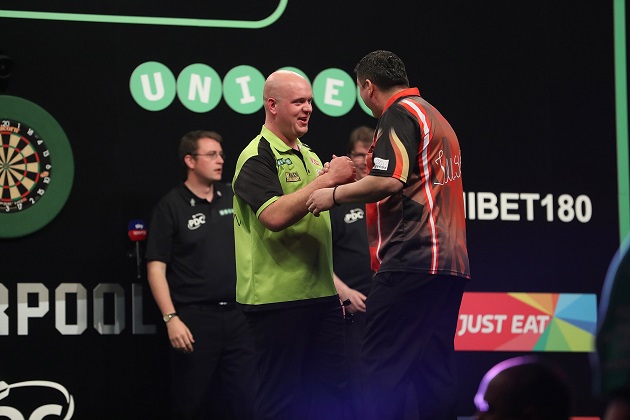 Suljovic had needed to claim at least a point from his tie with Van Gerwen to put the pressure on Peter Wright at the Echo Arena. However, Van Gerwen produced another master-class to retain his advantage at the top of the league table and eliminate the Austrian from his debut Premier League season. Van Gerwen opened the match with six perfect darts and landed a stunning ten 180s during the game, averaging 107.45 to claim his eighth win from nine matches.
Suljovic joins Gerwyn Price in dropping out of the Premier League following Judgement Night, with the remaining eight players now progressing to compete for Play-Off places over the next six weeks. Suljovic withstood Van Gerwen's early barrage of four 180s in two legs to lead 2-1, before legs of 14, 14 and 13 darts put the world number one in command. The Champions League of Darts winner finished a 12-darter as he pulled back to 5-4, but Van Gerwen took out legs of 14 and 11 darts to seal the win. 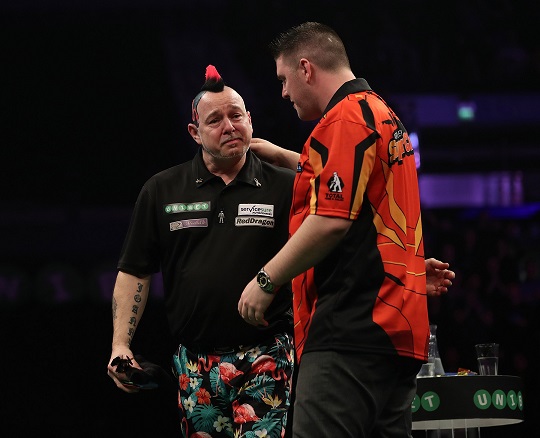 Wright later drew with Daryl Gurney in an emotionally-charged final game, with the breaking news that the legendary Eric Bristow had passed away seeing the 8,000-strong crowd singing their tribute to the five-time World Champion.
Gurney had begun the day in Derry at the birth of his son Daryl Jnr, before flying to Liverpool to compete in the Premier League in what could have been a pivotal contest with Wright. Gurney landed five 180s and a 121 checkout as he finished six doubles from 12 attempts, while Wright landed six perfect darts in the deciding leg as a 12-darter secured him a point. 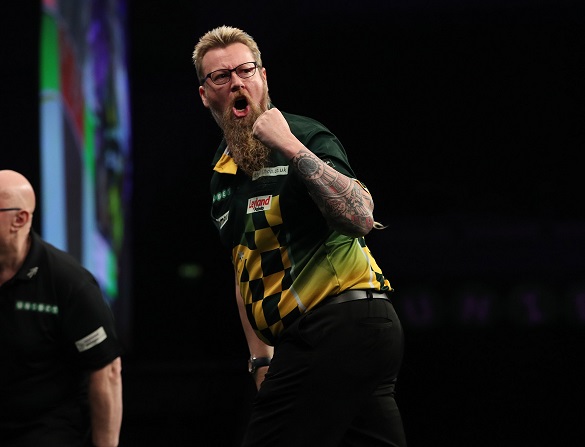 Price's disappointing debut season ended with a seventh defeat from nine matches as the Welshman lost out 7-3 to Simon Whitlock.
Australian ace Whitlock opened up an early 4-1 lead as the pair struggled to find their range on the doubles, before Price hit back to 4-3. However, a key 164 finish denied the Welshman the chance to level, and Whitlock then finished double six and double 16 to claim his fourth win of the season and maintain his Play-Off push.

"It was a good win in the end and the two points is huge to me," said Whitlock. "I'm pushing towards the top four again now and I can build on that. "I'm experienced in the Premier League and Gerwyn is new, and I do feel for him. He's a good mate and we get along great but the Premier League's tough. "That's not the Gerwyn Price I know and it made it difficult for me because I'm feeling the pain he's going through but I had to do a job. "I got there in the end but it was ugly. It wasn't a good performance but I'll take the two points." 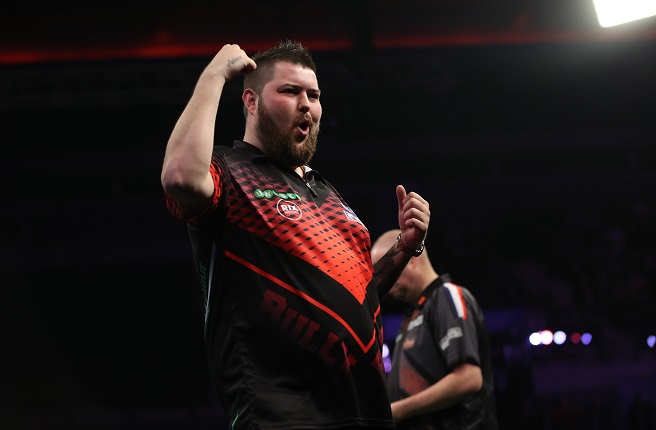 Michael Smith rose to the occasion in his "home" Premier League night as the St Helens ace whitewashed Raymond van Barneveld 7-0 in an outstanding display.
The former World Youth Champion's seventh win of the season saw him hit seven doubles from eight attempts - with his only miss being a wired bullseye to complete a 170 finish - while he also averaged 103.15. Finishes of 86, on the bull, and 70 gave Smith two early breaks as he took command, and he also finished 116 in leg six before completing the win to seal both points.

"My finishing went really well but I'll take my first whitewash in the Premier League," said Smith. "I knew this kind of performance was coming and you can't be at your best every single match but to get close to it tonight is really nice. It shows that the hard work's paying off. "I've not been playing well in the Premier League but I've still been winning. It had to come some time and I'm glad it came today, I enjoyed it and it was a nice night for me. "I'm just glad to get past Judgement Night and I can relax now and start looking forward now and focus on the top four." 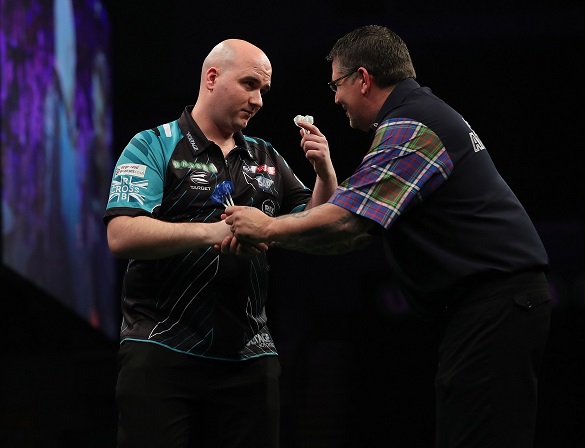 World Champion Rob Cross claimed his sixth victory of the tournament as he overcame Gary Anderson 7-5 to continue his impressive run of form and claim a first career win over the Scot. Anderson hit back from 2-0 down to level and remained all square following six legs, but Cross took out 67 and 75 to regain the edge and fired in a 180 as he held firm in a decider to claim the points.

"It wasn't great tonight but a couple of big moments helped," said Cross. "The 75 to go 5-3 up was big and I managed to hold my throw from there. "If you're winning you're not doing a lot wrong - it doesn't matter if it's scruffy or perfect. I've played brilliantly against Gary before and lost so to get the win tonight is really pleasing. "I've really enjoyed the Premier League, the crowds are amazing and I look forward to it every Thursday."