MICHAEL VAN GERWEN and Michael Smith maintained their advantage at the top of the Unibet Premier League table with wins at the Motorpoint Arena in Nottingham on Thursday, as Rob Cross' resurgence continued. 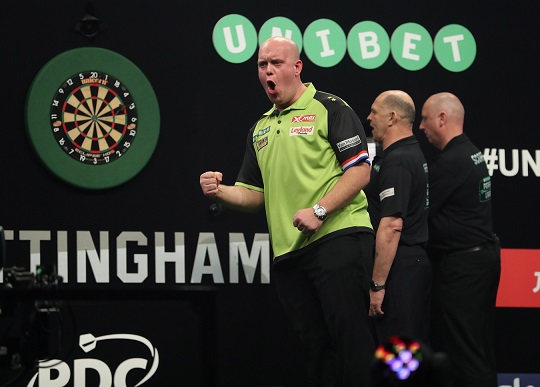 Reigning Premier League champion Van Gerwen remains top on leg difference ahead of Smith following the Dutchman's 7-3 demolition of winless Gerwyn Price. Price shared the opening four legs of the contest, but a 152 checkout from Van Gerwen moved him ahead before the world number one finished 95, 71 and 117 as he moved 6-3 up, and an 11-darter sealed a fine win.

"I think I played okay but I know I can do a lot better," said Van Gerwen. "I did the right things at the right moments and got the two points, which was the most important thing. "I want to raise my game now for the rest of the Premier League, but I'm at the top of the table and that's where I want to be. I feel good." 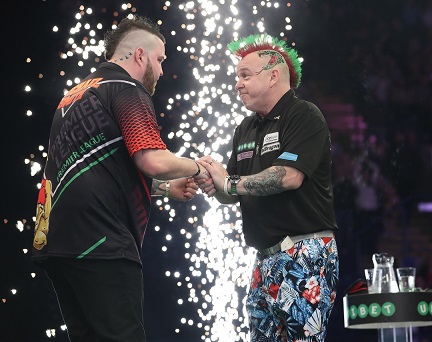 Smith bounced back to winning ways with a 7-1 romp against Peter Wright, who has been dragged into the battle to avoid elimination following a second successive heavy loss.
Smith had seen his winning start to the season ended on Night Five in Leeds, but picked up his fifth victory of the campaign in clinical style, winning six legs from seven on his favoured double tops. The St Helens man followed a 13-darter with a 77 finish to break, with Wright responding with a 13-darter only to miss four darts to level as Smith moved 3-1 up and then pulled clear for victory.

"I had four straight wins and then threw it away last week against Rob Cross, so I wanted to get straight back to winning ways and I've done that," said Smith. "I started off alright but I saw Peter was struggling. I didn't perform as well as I wanted to but I won and that's the most important thing. "I keep hitting the doubles and getting the points. I've been focusing on not getting eliminated and this is another two points towards that, so I'm pretty happy but I've still got more in the tank." 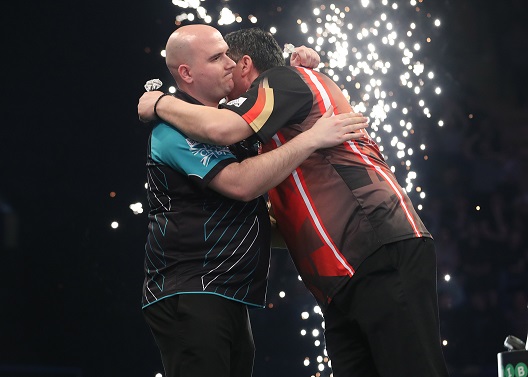 Rob Cross continued his fine run of form as he picked up a fourth successive win, and averaged a superb 106.49, in a 7-2 win over Mensur Suljovic to move into third place.
Cross finished double 18 to break immediately and took out 68 to double his lead, and after Suljovic hit back in the third with a 14-darter, the World Champion pulled clear. A 104 finish restored Cross' advantage, an 11-darter moved him three legs ahead and a pair of tops checkouts secured at least a draw, with double nine giving Suljovic brief hope before double 12 sealed the win.

"I felt great up there and I was glad to win," said Cross. "I was nice and relaxed and composed and my doubles were good today. "Mensur didn't play as well as he has been recently but my setting up and finishing was great and it's something I've been working hard on. "I'm really happy with the win, I'm enjoying it and I was focused on the job tonight. I feel I'm playing well and it's all going the right way for me at the minute - I feel I'm getting better every week." 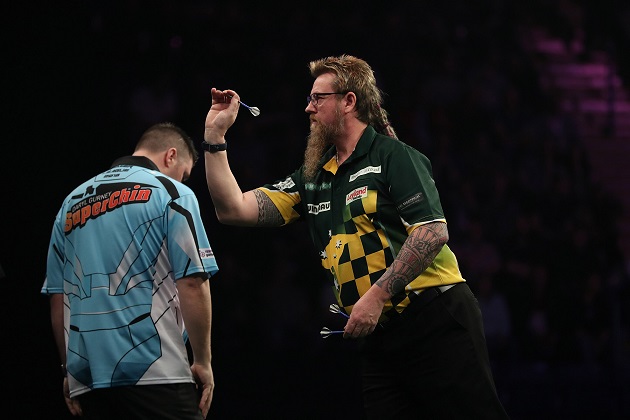 Daryl Gurney secured his fourth draw of the season as Simon Whitlock squandered four match darts in the deciding leg of their tight contest.
Northern Ireland's Gurney came from a leg down to lead 3-1, only for Whitlock to move back ahead after seven legs with the aid of a superb 133 checkout. The Australian also took out 88 and 112 as he secured a minimum of a draw at 6-5, but four misses in the final leg allowed Gurney back in on double eight to share the points.

"It was a strange game," admitted Whitlock, who now sits in fourth place on seven points. "Daryl got off to a good start, I came back at him and missed match darts, which is disappointing. "But to get a draw against Daryl is pretty good for me because of my record against him and a draw's not a bad result in the end."

Gurney moves out of the bottom two following his fourth draw of the campaign, but admitted to being frustrated as he searches for his maiden Premier League win.
"To try to get to where I want to be I had to win tonight, so the pressure's still on," he said. "Simon played a great game - I kept on top of him but he kept on going. "I thought it was competitive leg-on-leg and it's another point for me, but I'm sure Simon's thinking he should have won." 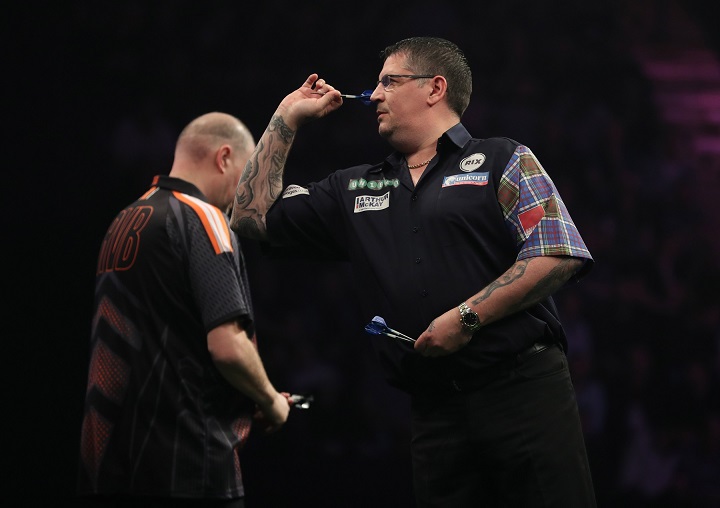 Former champions Raymond van Barneveld and Gary Anderson also shared the points, as the Scot took out 144 in the deciding leg to snatch a draw.
After finishes of 105 and 117 put Anderson ahead, Van Barneveld moved 6-4 up only to then miss five match darts in leg 11, with double two keeping the UK Open champion's hopes alive before his third ton-plus checkout sealed a point.

"I know I can still play better but I pinched a point at the end," said Anderson, who is now on a 23-game unbeaten run. "I was practising well but the darts were dropping low when I got on stage "The checkout at the end is how I wanted to start off the game but Raymond missed a few shots and let me in. I'll take it for now but it's got to come good sometime."

Van Barneveld was left to rue his chance to claim a third win of the season, and admitted: "I could have won that but I missed those doubles at the end and Gary's 144 was a great finish. "When I was 4-2 down I'd have been happy with a draw, but if you're leading 6-4 you think you might win and that's when things go wrong. It's a tough competition this year and anything could happen in the next few weeks."