GARY ANDERSON confirmed his place in the Unibet Premier League Play-Offs with a win over Michael van Gerwen as the regular season concluded at The BHGE Arena in Aberdeen on Thursday.
The two-time Premier League champion overcame league leader Van Gerwen 7-5 in front of a passionate home crowd to leapfrog Rob Cross into third place. Anderson's win sets up a mouth-watering semi-final clash with close friend Michael Smith at The O2 next Thursday, while Van Gerwen and Cross will face off in the other last four contest. 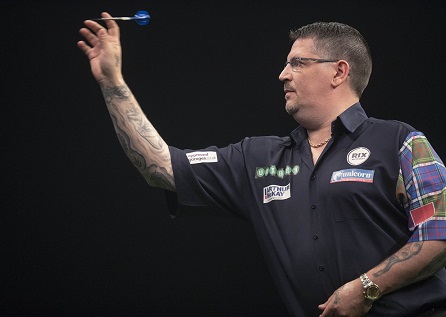 Scottish favourite Anderson fired in four 180s as he got back to winning ways after losing his last two Premier League encounters.
Anderson broke the Dutchman's throw in the first leg before Van Gerwen broke straight back and then hit an impressive 13-dart leg to go in front. Buoyed by a vocal home crowd, Anderson won the next three legs to go into a 4-2 lead, including a stunning 121 checkout in leg five. Reigning Premier League champion Van Gerwen pulled one back before breaking the Anderson throw with a 12-darter to level the game once again at 4-4. Anderson hit a 12-dart leg of his own to break straight back and then held throw to go within a leg of victory at 6-4. Van Gerwen won the next leg to take the match all the way, but Anderson held his nerve to win a crucial decider and end his two-game losing run.

"I'm pleased to win tonight and it's great for me ahead of the Play-Offs," said Anderson, who will play Smith in the second semi-final at The O2 on May 17. "It's been hard since Rotterdam so I'm pleased to get the win against Michael. The 15 weeks is gone now and it's all down to one night." 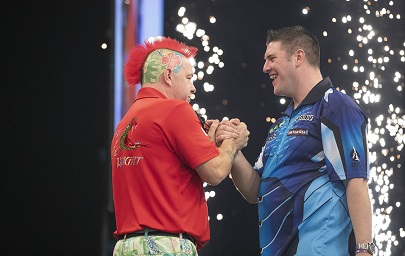 Anderson's place at The O2 was already confirmed earlier in the evening as Daryl Gurney - the only other player in contention for the Play-Offs - drew with Peter Wright. The Northern Irishman needed to win by at least five clear legs to keep his dream of reaching The O2 alive, but Wright refused to be beaten in front of his home crowd.
Gurney, who ends the season with just four defeats, started well as he broke the Wright throw in the first leg and then held for a 2-0 lead. However, the Scot fought back to trail 4-2 as the pair hit four maximums each in the game. Gurney was still dreaming of making The O2 in his debut campaign as he went 5-2 up, before Wright ended his hopes in the next leg as he reduced the deficit to 5-3. It looked like the Northern Irish ace would end the season with a win as he went into a 6-4 lead, only for Wright to rattle off the last two legs as he finished in seventh position.

"It's definitely been a positive campaign for me," said Gurney, who drew eight times in his debut Premier League season. "I started off slowly because I was too nervous for the first five or six weeks but I've played better since Judgement Night. "I can't complain; I've played against the best players in the world, in front of the best crowds in the world - what else can you ask for as a darts player?" 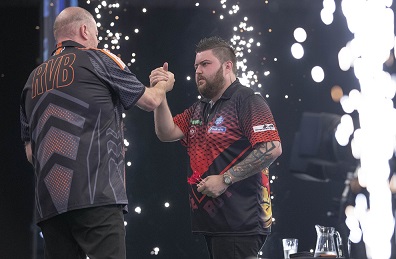 Smith secured second place with a 6-6 draw against Raymond van Barneveld. The St Helens star, whose place in next week's Play-Offs was already guaranteed, came back from 5-4 down to earn a point in a high-quality affair which featured five ton-plus checkouts and six maximums.
Van Barneveld continued his strong end to the Premier League as he extended his unbeaten run to five games, although he misses out on the Play-Offs by three points. Smith went ahead twice in the first four legs of the match, only to be pegged back on both occasions as the Dutchman fired in finishes of 122 and 126. The Aberdeen crowd were treated to yet another ton-plus checkout in the fifth leg as Smith regained the lead with a 124 combination. Van Barneveld, keen to avenge his 7-0 defeat to Smith in Liverpool, hit yet another superb 121 checkout to level at 3-3, before the pair exchanged holds of throw. The Dutch ace went ahead for the first time in the match at 5-4 thanks to a 14-dart leg, only for a determined Smith to wrestle back the advantage as he went 6-5 up. Van Barneveld ensured he would not leave the game empty handed as he produced another 14-dart leg, which ended with a 91 finish.

"I didn't feel good tonight," said Smith, who has been diagnosed with pleurisy this week. "I could've pulled out with my illness but I didn't want to let people down, I wanted to fulfil my responsibility as a Premier League player. "My illness comes second at the moment, I want to win every match that I play in and I'm out here fighting." 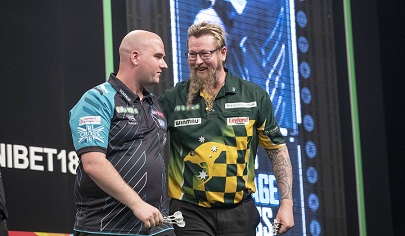 World Champion Cross ended his debut Premier League campaign with a 6-6 draw against Simon Whitlock as he prepares to compete at The O2 for the first time. The Aberdeen crowd were treated to nine 180s as both players fought all the way in a tense battle.
Cross had already secured his place in the Play-Offs going into the game, and showed his intent to finish the league season in style as he opened with a 112 finish. The reigning World Champion continued his strong start to the match and went into a commanding lead at 3-1. Whitlock, who finishes his campaign in eighth place, showed his fighting qualities to bring the game level at 4-4. Cross broke the Australian's throw to move 5-4 ahead with a 90 checkout, only for Whitlock to break straight back and then hold throw to move into a 6-5 lead. However, Cross ensured he would not go into the Play-Offs on the back of a defeat as he tidied up 94 in two darts to earn a share of the spoils.

"I didn't play that well," admitted Cross, who travels to The O2 without a win in his last five matches. "I've had a few days off practicing this to give myself a rest, then I'm going to go hard at it next week. "I've learnt a lot this year, I'm pleased with how I've done so far but I think next year I will be even better for the experience."