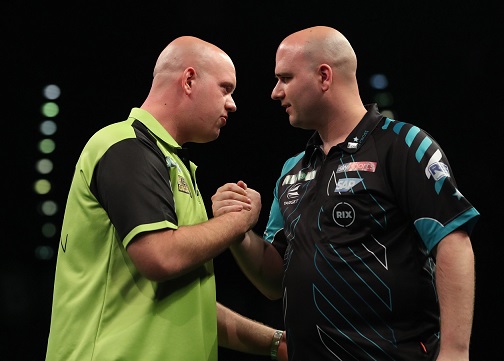 World number one Van Gerwen beat Cross 7-2 to ensure his place at the top of the Premier League standings for the sixth year in succession, ensuring the 25,000 pound league leader's bonus.
Van Gerwen threw a stunning 111.57 average, the highest of this year's Premier League, and started the game in sensational form, rattling off the first two legs against the reigning World Champion. The Dutchman then hit a 76 finish to round off an impressive 11-dart-leg, before going 4-0 up against a stunned Cross. The World Champion registered his first leg of the match and then battled back to 5-2, only for Van Gerwen to seal an impressive win by rattling off the next two legs.
 "I think it was a phenomenal game from me, I did the right things when I had to," Van Gerwen said. "I know I have to perform well every week and I have to make sure I do the right things at the right times. "You have to keep Rob under pressure because he has a lot of confidence, and I did that. I didn't make many mistakes and it was a great win for me. I'm so happy to be top for a sixth season. "I know I'm the best but I have to make sure I go out at prove it every week. The pressure if off me now and I can make sure I'm fully focused going to The O2." 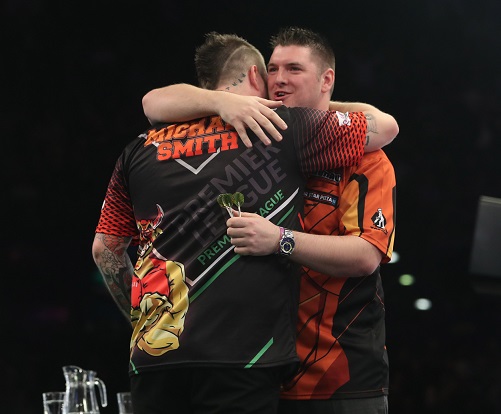 Michael Smith ensured his place in the Play-Offs as he earned a point in a hard-fought draw with Daryl Gurney.
Smith, who needed just three legs to ensure his place at The O2, had to withstand a barrage of six 180s from Gurney. The Northern Irishman needed at least a draw to keep his top four hopes alive but found himself 3-1 down as Smith started well. Gurney kept himself in the game with a 147 checkout, and three legs later took out a stunning 167 to level the game at 4-4. The pressure was on Smith, who trailed 6-5 going into the final leg of the match, but the St Helens thrower held his nerve to deny Gurney a crucial two points by taking out 81 on the bull.

"My dad can book his hotel for The O2 now," said Smith, the former World Youth Champion. "Daryl hit me with some good shots, the 147 and the 167, but I kept my head level. "I knew I needed one big leg at the end, thankfully I threw well and went out in 12 darts." 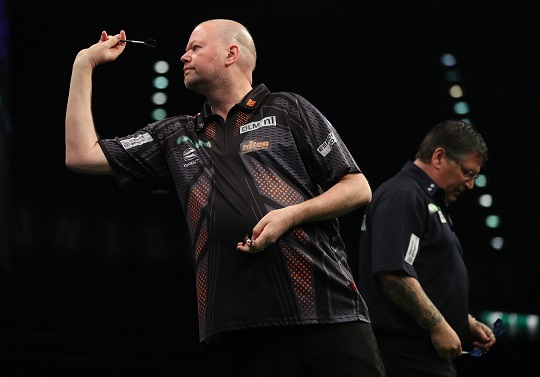 Fourth-placed Gary Anderson will go into the final league night knowing that his spot in the Play-Offs is not yet secure, after the Scot went down 7-3 to Raymond van Barneveld.
The Dutchman produced a strong display, despite being unable to qualify for The O2, as a blistering start from Van Barneveld, which included a 103 checkout, moved him three legs clear. Anderson pulled one back, but Van Barneveld was in top form and rapidly extended his lead to 5-1. The Scot fought his way back to 6-3 but the Dutchman sealed his third win in four weeks to keep himself sixth in the table and leave Anderson still under pressure from Gurney.

"When the pressure is off, you release stress and I felt very comfortable," said Van Barneveld. "I was playing well and I felt focused. I tried to win by a big score to keep myself in the tournament. "It hasn't been my best Premier League campaign but I want to end it well and finish as high up the league as possible." 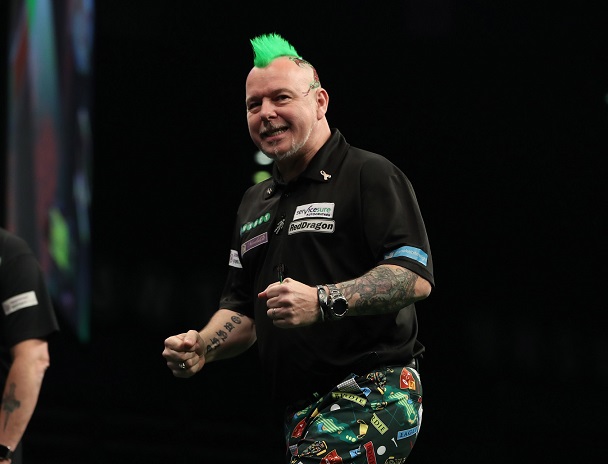 Peter Wright leapfrogged Simon Whitlock to move into seventh place in the table with a 7-4 win.
Although both Wright and Whitlock knew they couldn't make the Play-Offs at The O2 on May 17, the opening game of the night saw a tense battle between the pair. Wright raced into a 4-1 lead before the Australian ace pegged one back to stay in the game. The Scottish star extended his lead to 5-2 before Whitlock showed his fighting qualities to bring it back to 5-4. Wright showed his class by taking out a 118 finish to move within a leg of victory, and then sealed the two points with a solid 14-dart leg.

"I was battling myself to be honest," Wright said. "I was a very lucky man because Simon should've won the match ages ago, if he'd have hit his doubles with the first dart every leg I would've been in big trouble."

The final league night at Aberdeen's BHGE Arena on May 10 will see Gurney needing to win his tie with Wright by a 7-2 scoreline or better to keep the pressure on Anderson, who takes on Van Gerwen.