MICHAEL VAN GERWEN became the first player to book his place in the Unibet Premier League Play-Offs as he picked up three vital points at The Manchester Arena on Thursday.
The world number one now sits three points clear at the top of the league going into the final two games before the top four play-off at The O2 next month. 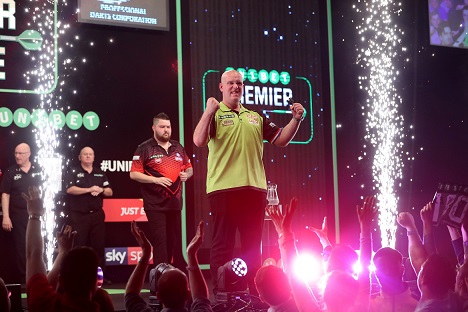 Last week's double-header in Rotterdam saw the world number one lose twice, but he stopped the rot with a stunning 7-1 win over Michael Smith and a 6-6 draw with Daryl Gurney in Manchester.

"I feel good, I didn't make a lot of mistakes and now I can focus on The O2," said Van Gerwen. "I believe in myself. I know what I can do, I've been top of the table for the last five years. "I know I can be better but it doesn't matter because I'm top of the table."

The Dutch ace was in relentless form as he raced into a 6-0 lead over second-placed Smith. The St Helens man stopped the rot in the seventh leg, only for Van Gerwen to finish the job in efficient style to end a successful night for the two-time World Champion.

Earlier in the evening Van Gerwen ended his two-game losing run as he salvaged a 6-6 draw with Daryl Gurney.
Gurney fought back from 3-1 down to keep his hopes of making the Play-Offs alive, as his clinical finishing saw him miss just three darts at double in the game. Van Gerwen started quickly, rattling off the first two legs, including a 130 checkout in the first, before Gurney took out an impressive 107 finish to pull one back. The pair were neck and neck throughout the game, before Gurney produced a stunning 156 checkout to level at 5-5. The Northern Irishman then edged 6-5 ahead, only for Van Gerwen to hold his nerve in the final leg to deny the Gurney the two points. 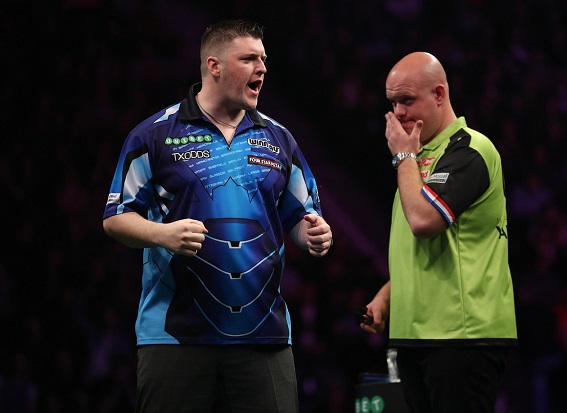 "I knew I had to take something from the game and the 156 probably got me the point in the end," said Gurney. "I could see that Michael was nervous but I didn't throw enough in the last leg to get the two points. "To be 6-5 up and if Michael had a bad leg I could maybe have stolen the game, but he started off with a 180 and I knew then I was kindof in trouble. At that stage I knew I was probably going to get a point. "I don't care who I'm playing - I never ever give up. I'm one of the best players in the world for one reason, and it doesn't matter who I'm playing I won't give up or give them an easy game." 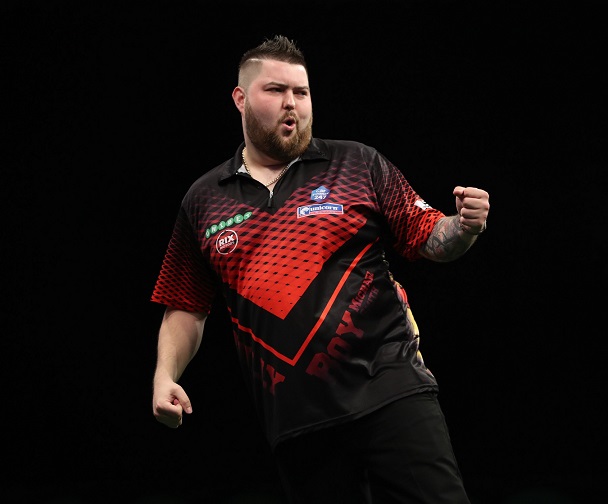 The opening game of the evening saw Smith go some way to securing his place in the Unibet Premier League Play-Offs with a convincing 7-1 win over Peter Wright.
Smith was in rampant form as he recorded an impressive 104.86 average to end Wright's Play-Off hopes. The former World Youth Champion fired in four 180s, along with two ton-plus finishes, on his way to all but booking his place at The O2 next month. Smith began the match in blistering fashion, taking out 128 in the fourth leg as he raced into a 4-0 lead, before Wright pegged one back with a 100 finish. But the St Helens star was in unstoppable form in Manchester and won the next three legs in swift fashion, including a magnificent 126 finish in the seventh leg, to wrap up a crucial victory. 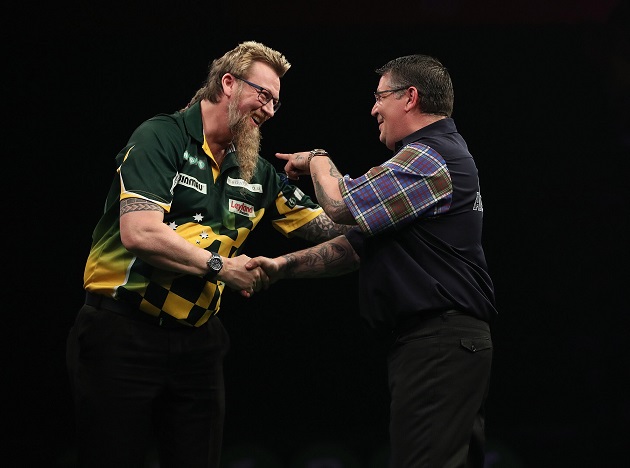 Simon Whitlock brought Gary Anderson's four-game winning run to an end with a 7-5 victory. The defeat for Anderson means his place in the top-four is still not assured, while the two points moved Whitlock above Wright into seventh spot. Although the Australian star cannot qualify for the Play-Offs, Whitlock showed plenty of fight as he fired in four 180s en route to ending his three-game losing run.
The match was nip and tuck throughout, before Whitlock edged into a 6-4 lead. The 2012 finalist missed one dart at double top to win the match, only for Anderson to produce a stunning 135 finish on the bull to break the Australian's throw. The Scot threw first in the final leg as he attempted to salvage a vital point to help book his place at The O2, but missed dart at double top to claim a draw before Whitlock ended the game with a 70 finish.

"To bounce back this week and beat one of the best players on the planet is amazing for me," said Whitlock. "I don't want to finish eighth, but I'll just play each game as it comes now and hopefully play the darts I know I can. "I know I'm not going to make the Play-Offs, but I'm going to try my heart out every single week. I love playing darts and I love the Premier League. "It's been a disappointing month for me but I'm over the moon with the two points tonight." 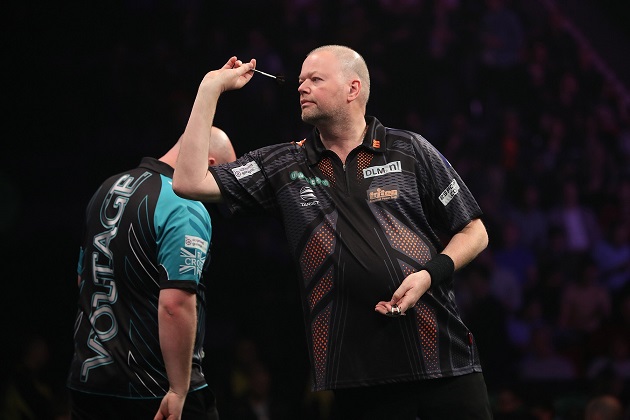 Raymond van Barneveld's play-off dream was ended as he was held to draw by Rob Cross, who is now all but assured of a place at The O2.
The first leg went to Van Barneveld, only for Cross to rattle off the next three in quick succession. The Dutchman stopped the rot with a stunning 129 finish on the bull to keep him in the game at 3-2 and then broke the Cross throw in the tenth leg to level at 5-5. Van Barneveld went 6-5 up to put the pressure on Cross in the final leg but the World Champion held firm as the points were shared.

"It wasn't the best game tonight, from both of us, but darts is a funny game sometimes," said Cross. "I've still got a job to do and I can't afford to lose my next two games. I'm not bothered where I finish in the top four as long as I make the Play-Offs."