MICHAEL VAN GERWEN made an impressive start to his Unibet Premier League title defence with a 7-2 defeat of Rob Cross as the 2018 season begin in Dublin on Thursday, where Simon Whitlock and Michael Smith also claimed wins. 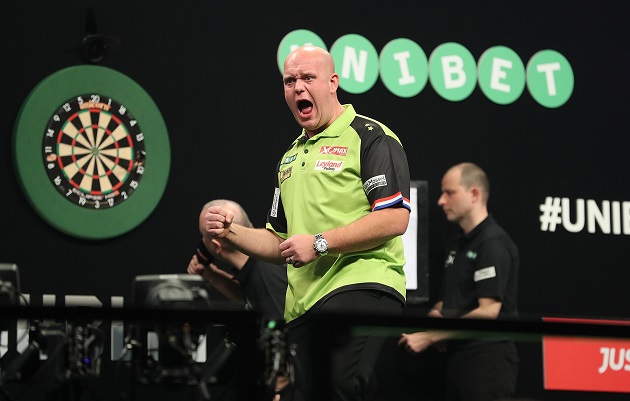 Van Gerwen was in dominant mood as he denied the World Champion a debut victory - and avenged his loss in the Alexandra Palace semi-finals a month ago - to begin his bid for a fourth Premier League title.
The world number one took out 114 in the opening leg, and finished 81 and a double ten to lead 3-0 before a 70 checkout gave Cross his first leg on the Premier League stage. Van Gerwen, though, finished a further two 114 checkouts in the next three legs as he moved 6-1 up, before replying to a 14-darter from Cross to close out the win on double eight.

"It's a phenomenal start to the season for me," said Van Gerwen, last weekend's Masters champion. "I've got a lot of confidence at the moment and I can build on this. "It doesn't matter how you win a game as long as you win, and this is a good two points for me. It wasn't my best performance but I did enough to win, and a 7-2 win over Rob Cross is a good start. "Everything was new for Rob and this is totally different to any other tournament, but there's a long way to go in the season yet." 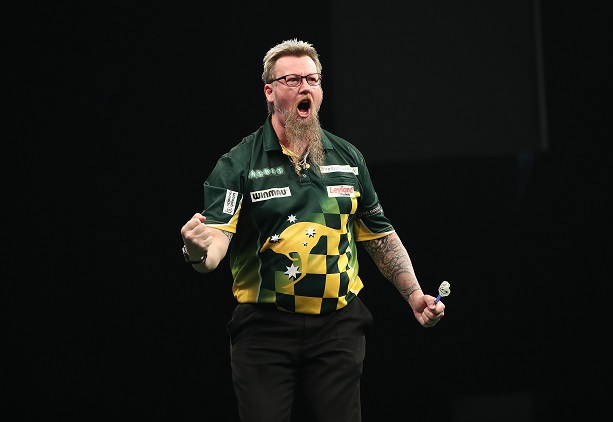 Former finalist Simon Whitlock made a winning return to the Premier League stage following a three-year break as he edged out debutant Mensur Suljovic 7-5 in a thriller.
Suljovic took out 121 and 110 as he opened up an early 3-1 lead, only for Whitlock to claim the next four as he took the advantage, following up legs of 12, 13 and 11 darts with a stunning 160 checkout. Suljovic finished 138 and double 18 to level, but another 12-darter from Whitlock moved him 6-5 up before he sealed victory in the deciding leg on tops for a 13-dart finish. Whitlock ended the game with seven doubles from eight attempts as he averaged 106.49, as the Austrian averaged a high-quality contest with a 103.71 average and five doubles from nine attempts.

"I enjoyed it and it's great to be back in the Premier League," said Whitlock. "I feel this is where I belong, I've practised hard and believed in myself. "Mensur's a really tough opponent and I'd have been happy to get a draw but once I got the chance for the win I took it, so I'm really happy." 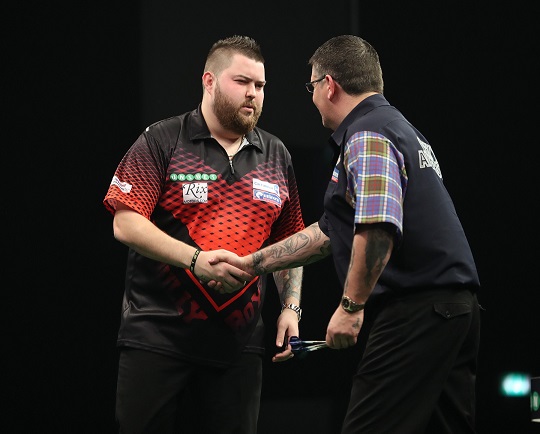 Michael Smith reeled off six straight legs from 5-1 down against Gary Anderson to claim a 7-5 win on his return to the Premier League stage.
Anderson made the early running as he defied an early 11-darter from the former World Youth Champion by firing in a 108 finish and checkouts of 86 and 85 to move to the brink of gaining at least a point. A 114 checkout from Smith fired his challenge, and he then punished ten missed doubles from the Scot in leg nine before a brace of tops checkouts moved him 6-5 up, and double ten completed a remarkable fightback.

"When I was in the Premier League last time, two years ago, it took me until the fifth week to get a point on the board but I've got two points straight away this time so I'm happy," said Smith. "I can relax a little bit now and to get two points is good and it takes some pressure off me. "I let Gary in early on and he went 5-1 up but then he let me in. It's always a struggle playing Gary because we're close friends and I know how great he is. I could see his was struggling with his back but I did my job." 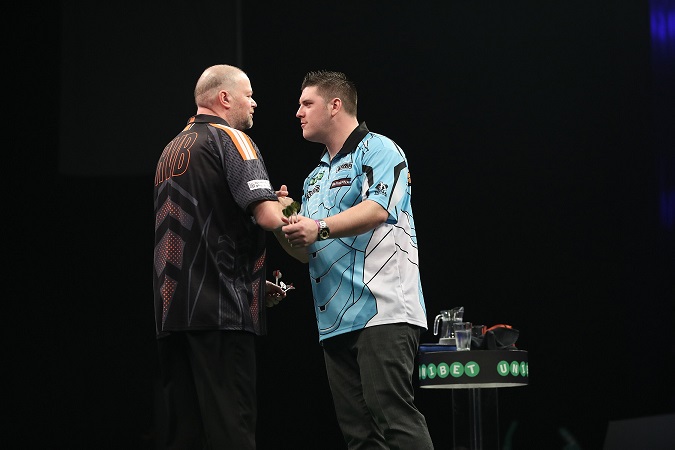 Raymond van Barneveld fought back from 6-3 down to claim a draw against Daryl Gurney as the Premier League debutant paid for missing three match darts to share the spoils in Dublin.
Gurney had won the World Grand Prix on his most recent appearance in Dublin last October, and made a strong start by finishing 95 on the bull and a 14-darter to break as he led 2-0. Van Barneveld won the next three, only for Gurney to take four in a row, culminating in an 11-dart finish as he moved 6-3 up. The 2014 champion hit back in leg ten, and punished Gurney's missed darts for the match - one at double ten and two at double five - in the next as he forced a decider, which he claimed by finishing 79 on tops.

"It was a hard-fought point for me tonight and I'm happy," said Van Barneveld. "Daryl probably should have won but I kept on fighting and believing and won the last three legs to get the draw. "I got in front and lost concentration, had a couple of sloppy legs and he played well. When I was 6-3 down it was going to be tough, and then he had a sloppy leg and missed three match darts. "In the last leg I played well and that double top was massive, very important. He's a fantastic player, not number five in the world for nothing, and he's hard to beat."

Gurney admitted: "It feels like a loss. I played well and got 2-0 up, and to have darts to win the game and then draw was disappointing. "It could have been worse - I still got a point and it will stand me in good stead. I'm always learning against these top players. "I played well but it's still a missed opportunity and right now it probably feels like a loss but there's not many people who play Raymond in the Premier League and get a draw so you've got take every point you can get. "I'm proud to be a part of the Premier League and hopefully I can move on to next week now and get a win." 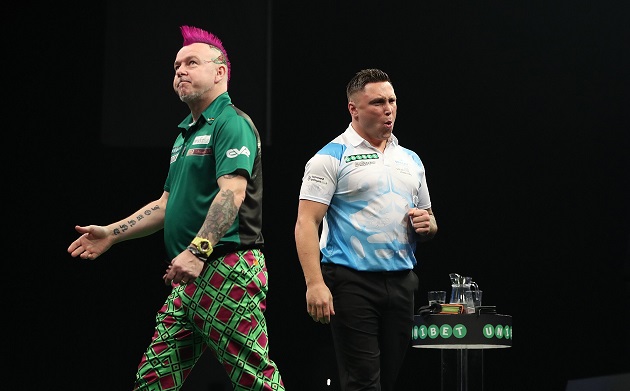 Debutant Gerwyn Price hit back from 5-1 down to claim a draw with 2017 finalist Peter Wright, who missed four darts for the victory in their repeat of last year's UK Open final.
Wright capitalised on a slow start from the Welshman to claim five of the opening six legs, before a 116 checkout from Price ignited his display. Wright edged to the brink of victory at 6-3, but Price finished 96 to stay in the game, punished a missed bull from his rival to force a decider before capitalising on a further three wasted chances to land double ten for a point.

"It means the world to me to be in the Premier League and I enjoyed the experience," said Price. "I think I bombed a few chances early on and I was up against it when I was 5-1 down. At the end of the day I've got a point, but I'm not happy."