MICHAEL VAN GERWEN, Phil Taylor and James Wade remained unbeaten in the Betway Premier League on a night of four draws at The Brighton Centre, as Jelle Klaasen picked up his first win of the season. The five matches in Brighton remarkably saw four six-all stalemates as the tournament's top three players continued their strong starts to the campaign. 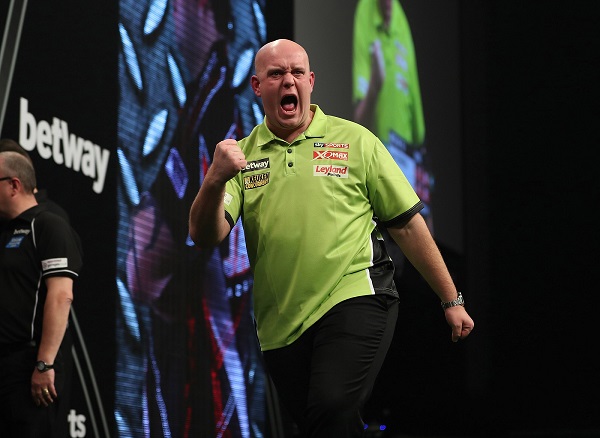 Reigning Premier League champion Van Gerwen was held to a draw with Adrian Lewis, who took out a superb 170 checkout before snatching a point in the deciding leg of a quick-fire contest.
Van Gerwen's opening 11-darter was cancelled out by Lewis before the two-time World Champion hit scores of 174 and 177 to set up doubles for 13-darters as he moved into a 3-1 cushion. Van Gerwen then landed a 116 finish before Lewis took out 170 in style to delight the capacity crowd at The Brighton Centre as he moved 4-2 up. An 11-darter from van Gerwen featured six perfect darts as he hit back, and the Dutchman levelled at four-all and five-all before he then secured a minimum of a point with a 14-darter. Van Gerwen also gave himself a chance to claim victory in the decider, but missed the bull for a 170 finish of his own to allow Lewis in on double 12 to share the spoils. 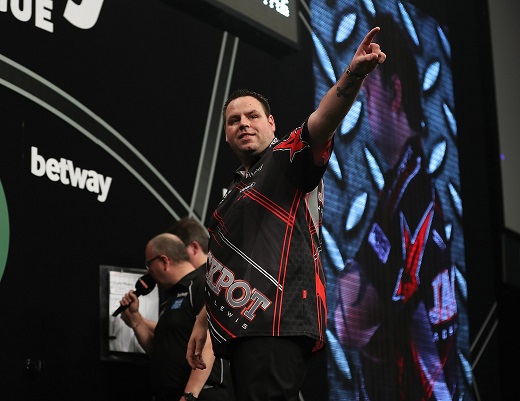 "I didn't play too badly but I missed a few things here and there, and you're not allowed to do that, especially against Adrian," said Van Gerwen. I started off really well but I didn't feel great today, I've had a bit of a cold and my focus wasn't really there - but you have to do it with your arm and your head. At least I got a point and I can't complain too much."

Lewis said: "I thought I did quite well at the end to get a point. I thought I had the chance to run away with it but I didn't take my opportunities, that's down to a lack of confidence I think. Results haven't really been going my way as such, but hopefully I'm on the turn now. I could have got a lot more out of the game - 12 months ago I'd have put the game to bed but today I didn't, but he showed his quality and that's why he's world number one." 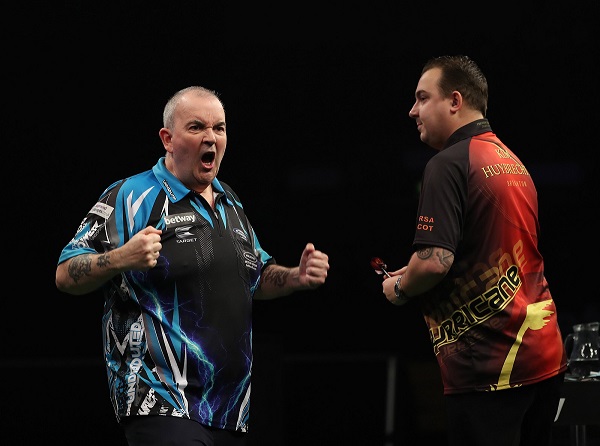 Second-placed Taylor scrambled home a draw against Kim Huybrechts, who missed three darts for victory in the game's final two legs before picking up his second point of the campaign.
After finishing 110 in the opening leg, Huybrechts then finished double nine and 87 as he held an early 3-1 lead, with Taylor staying in touch at 4-3 before being left waiting on 32 as the Belgian took out a stunning 140 checkout. Taylor responded in the ninth before another 87 checkout secured a point for Huybrechts in his bid to claim a maiden televised win over the 16-time World Champion. Taylor landed his third 180 of the game in the next before allowing Huybrechts a shot at 136 - with the Belgian missing double eight for the victory before the Stoke ace took out double 16 to force a deciding leg. Huybrechts also gave himself another shot at the win in the final leg, but missed darts at tops and double ten to allow Taylor in on double eight to claim the point.

"It was a point gained," said Taylor. "He had a shot and he missed, but he played well. I wasn't quite on song tonight but I plodded on and tried my best. I didn't play as well as I can do, but the key thing was getting another point. I'm trying to qualify for the Play-Offs and it's all about that and getting the points."

Huybrechts said: "I'm disappointed. I missed some important doubles, he did as well, but I think I should have won that game. Phil's the 16-time World Champion, I've never beaten him on stage and I had my chances but I blew it. I was very nervous but it was my own fault. It's still a learning curve for me but I'm getting there." 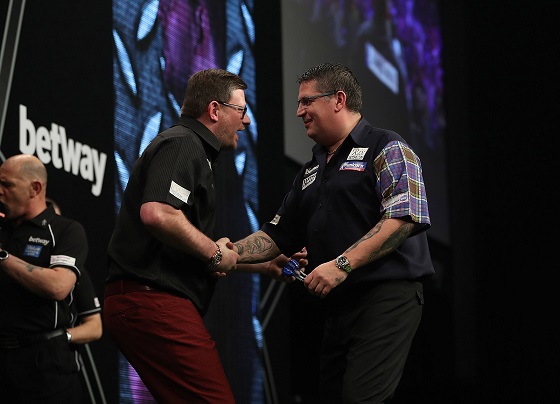 Gary Anderson came from 5-1 down to claim a draw with Wade in a battle of two former Premier League champions, as the left-hander continued his unbeaten start to the season.
Anderson had won the opening leg with the aid of a 180 in a 14-darter, only to see Wade finish two 14-darters to edge ahead before taking out 100 and 110 to lead 4-1. He then fired in a 171 score as he opened up a four-leg lead before Anderson recovered from earlier misses with a purple patch as he finished back-to-back 12-darters with finishes of 88 and 121 before taking out tops for a 13-darter. Anderson then punished Wade for his misses across three visits in the tenth as double three levelled the contest, and tops saw him claim a fifth straight leg to secure a point at 6-5. Wade, though, held the advantage of throw in the decider, and was first to a finish as he claimed a draw on double nine.

"It's a good point and from 5-1 down I'm over the moon to get a draw," said Anderson. "I was out-scoring James at the start but I couldn't hit a double, and you know that if you miss he's going to take his chances. It's hard to play against that but I clawed it back and got the draw. I'd have felt a bit guilty if I'd won that, but it's a point. There's a long way to go but I enjoyed it tonight."

Wade said: "It feels like a loss and I wasn't good enough. I'm annoyed but Gary did what he needed to do at the right times." 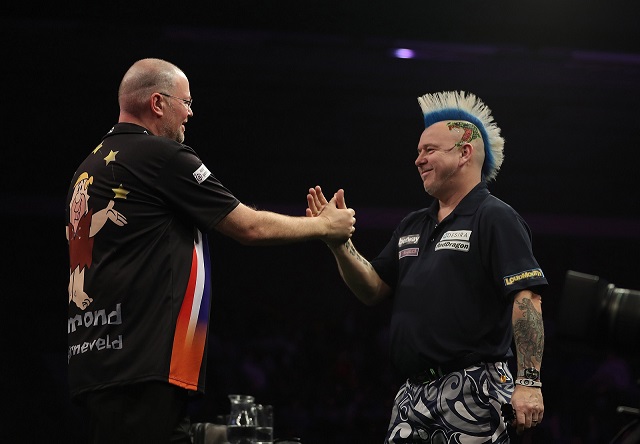 Peter Wright remains a point behind the top three following his draw with Raymond van Barneveld, who took out a brilliant 140 checkout to grab a point from their south coast contest.
A tight contest saw the opening eight legs shared before Wright broke for the first time to lead 5-4, before double eight ensured a minimum of a point. Van Barneveld landed two 180s in a 13-darter to keep his hopes alive in leg 11, and then produced a majestic 140 finish on double ten to share the points.

Wright admitted: "I had my chances but didn't take them. It's always difficult against Raymond and he showed that with the 12-darter against the throw in the last leg." 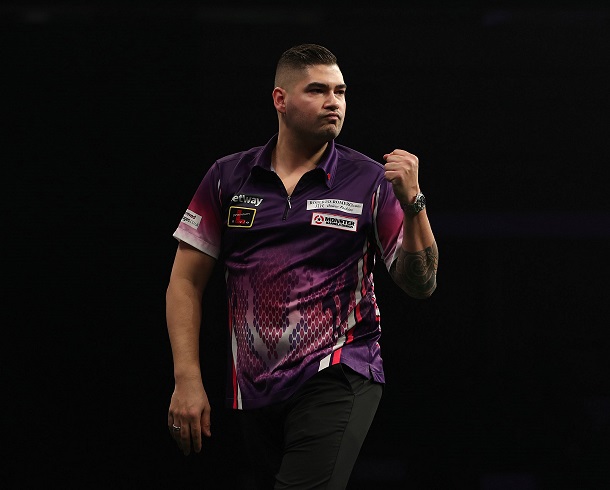 Dutch ace Klaasen picked up his first victory of the season with a fine display to defeat Dave Chisnall 7-3, averaging almost 99, hitting four 180s and finishing seven doubles from 15 attempts.
Klaasen opened the first two legs with maximums, while he followed an 85 finish with a 72 checkout to lead 2-1 before Chisnall took out 86 to respond in leg four. The Dutchman, though, capitalised in leg five before taking out tops, a brilliant 152 finish and another 85 checkout for a 6-2 cushion, and though Chisnall responded briefly with tops, Klaasen sealed the win by taking out 72.

"I'm happy with the win and I feel good," said Klaasen, who moves above Chisnall on leg difference with five games remaining before the bottom two players are eliminated on Judgement Night. "In the first three weeks I didn't play badly but I missed a few chances, but I've practised a lot on my doubles - I've tried to go more for tops and double 16 - and it worked today. It's good to get away from zero points. I'm still not where I want to be, and on stage I still need to get some more confidence and I have to play a lot better to stay in the league. Tonight that worked out, and before the game I knew that I had to take something from this match. I've got two points and I'm feeling good, and I want to stay in the top eight and then try to qualify for the semi-finals."