MICHAEL VAN GERWEN punished six missed match darts from Peter Wright as he retained the Betway Premier League title on a remarkable finale to the 2017 season at The O2 in London on Thursday.

World number three Wright had looked set to mark his first appearance in the Premier League's Play-offs by going all the way to glory when he followed up an amazing semi-final win over Phil Taylor by leading Van Gerwen 10-9. However, six missed darts at double 16 and eight allowed Van Gerwen to level and force a deciding leg, which he began with a ninth 180 of the final and ended with an 88 finish for a 12-dart winning leg. 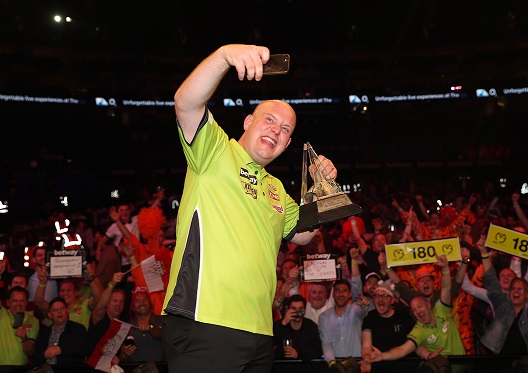 Van Gerwen had begun the night with a 10-7 win over Gary Anderson as the world's top two ranked players clashed at the semi-final stage. Van Gerwen had pulled clear from seven-all to claim his spot in the decider, despite Anderson firing in seven 180s and a 160 checkout, before then seeing Wright and Taylor fight out a tension-filled 19-leg semi-final.
Wright led 4-0 and took out 120 for a 6-3 cushion before Taylor reeled off four straight legs to move himself ahead. Taylor also led 9-8, but was left to rue a missed match dart at tops as Wright levelled before winning the decider to end the 56-year-old legend's hopes of winning a seventh Premier League title in his farewell to the event. 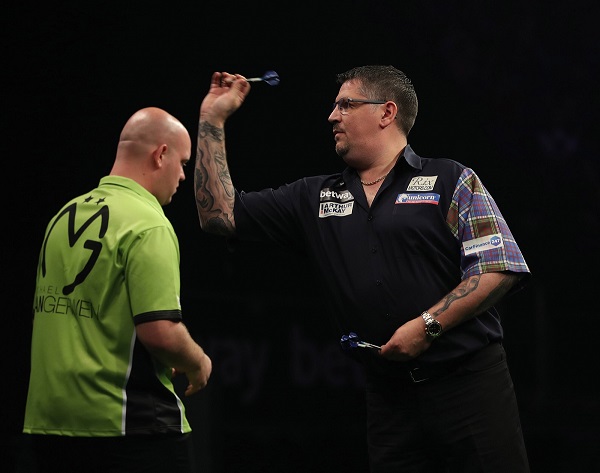 Wright carried that momentum into the final as he took leads of 3-0 and 5-1 with the aid of two key breaks of throw, and after Van Gerwen hit back in leg seven the Scot fired in legs of 11 and 14 darts to open up a 7-2 cushion. Van Gerwen took the next two to kick-start his challenge, before an 11-darter featured the first of six 180s in as many legs as the reigning champion fought back to level at eight-all. Wright took the 17th as he replied to a Van Gerwen maximum with one of his own before taking out 84 to lead 9-8, and a 96 finish then moved him 10-9 up and within touching distance of the title. Wright then opened the 20th leg with scores of 140, 180 and 149 to leave 32 after nine darts, only to miss a dart at double 16 and five darts at double eight for glory. Van Gerwen hit double ten to force a deciding leg, opening up with a huge 180 against the throw before taking out 88 for a 12-darter as double four completed a brilliant fightback. 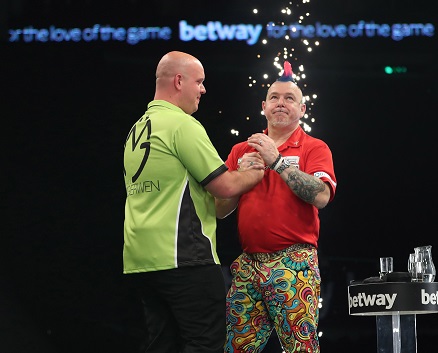 "It's a fantastic moment for me," said Van Gerwen. "I think that was a great final and I'm really glad I can walk away with this trophy again. "I missed a few chances and Peter finished well, he did what he had to do but after the break I played really well and I had a great comeback. "Peter started playing well again and I don't know how he missed six darts for the match. A player of his quality normally hits the double, but for some reason he missed them. This was a really crazy game. "Peter was really close today but I kept myself relaxed and stepped in at the right moment. It's been great, absolutely fantastic." 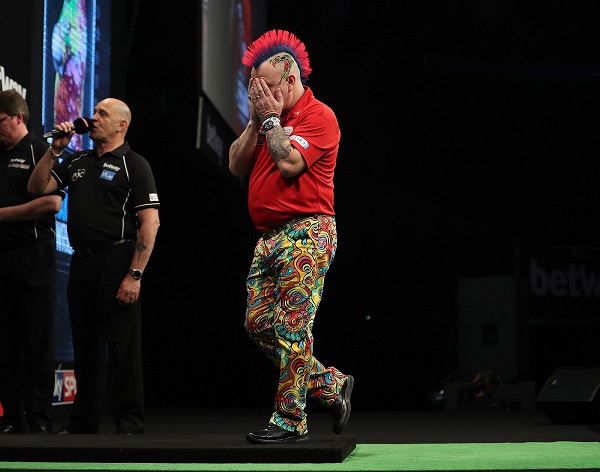 Wright takes home 120,000 pound as the runner-up, having fallen agonisingly short of winning his second televised title, following March's success in the UK Open which is one of seven tournament wins so far in 2017.

"Well done to the champion, fair play to Michael," said Wright. "It's been a good season, the top two players finished one and two. "By the end of tonight that's gone, and Michael will know I've let him off. "I can't believe I missed so many darts at a double. You can't have five darts at a double to beat the number one in the world and double World Champion, and it's something I've got to learn. "I'll go back to the practice board and then get him next time. At the moment I think I should have won, but that's gone and I'll start to think about the next tournament. "You've got to learn to lose before you win, and I'm not going to lose any more - the wins are coming." 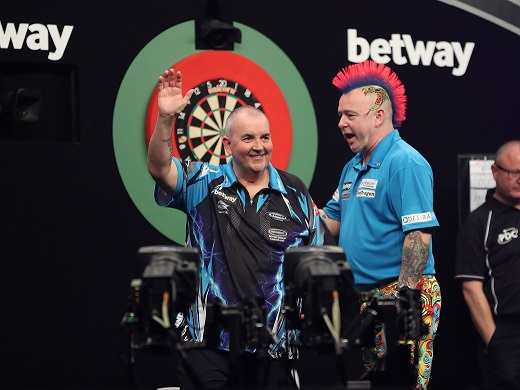 Taylor's semi-final defeat was his last of 207 Premier League appearances since he led the inception of the event in 2005, with his wins in the first four years followed by further titles in 2010 and 2012.
Despite the disappointment of missing out on a final title, Taylor said: "I'm fine - I had my chances and didn't take them. "The crowd gave me so much inspiration, and it was just a couple of shots that I missed, that's all. "I went in front and then went nervous - I could feel my heart beating - maybe because it's my last one. Peter was the better player, I can't fault him; he held his bottle and hit the right shot at the right time."