Peter Wright's 7-1 win over Raymond van Barneveld at the GE Oil & Gas Arena had left Van Gerwen needing to defeat Anderson if the Dutchman was to claim the 25,000 pound League Winner's Bonus. The world number one rose to the challenge in a scintillating game with Anderson, taking command early on by moving into a 3-1 lead before holding off the Scot's fightback, which included a 145 checkout. 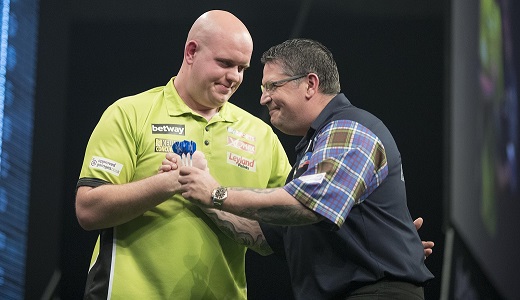 Taylor had earlier come from 5-3 down to defeat Adrian Lewis 7-5 as he claimed the final spot in the league table ahead of Dave Chisnall, whose Play-Off hopes were ended with a six-all draw against James Wade.
Those results mean that Van Gerwen and Anderson will clash again at the semi-final stage in next Thursday's Play-Offs, as the pair continue their search for a third Premier League title.

Van Gerwen, though, leaves Aberdeen celebrating his achievement in topping the regular season's league table for a fifth successive year since he entered the tournament.
"It was really tough this year," said the Dutchman. "Peter was in my shadow all the way through and fair play to him but I came here for two points and I got them, so I'm really glad. "I think my scoring was good but I still missed too many chances in my opinion - but I did the job I needed to tonight. It was really important for me and I'm happy with this win so I can look forward to next week at The O2. "It's the top four darts players in the world and I can't wait. It's always a good game against Gary and I feel good." 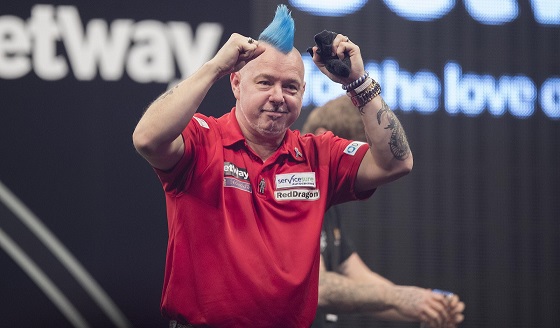 Wright produced another clinical display as he prepared for his first-ever Premier League Play-Offs challenge with a superb 7-1 defeat of Van Barneveld.
The Scot landed 180s in each of the first two legs, with the latter being a 14-dart break, before an 80 checkout moved him 3-0 up. Van Barneveld replied on double ten, but Wright posted another 180 as he regained his edge, punished misses from the Dutchman to break again, took out a 14-darter to move 6-1 up and then sealed the win with a 116 finish.

"I've qualified for the top four for the first time and I'm happy with that," said Wright, who has finished in fifth place in two of his previous three Premier League campaigns. "I'm pinching myself thinking that I'm in that top four alongside Phil, Gary and Michael - it's crazy. My form's coming and I've got another week to get it right for The O2. "It's always hard to beat Barney. He's a tough customer and isn't a five-time World Champion for nothing, but to have that amazing support behind you in Aberdeen makes you want to play. "The fans were fantastic, it makes you tingle when you're on stage." 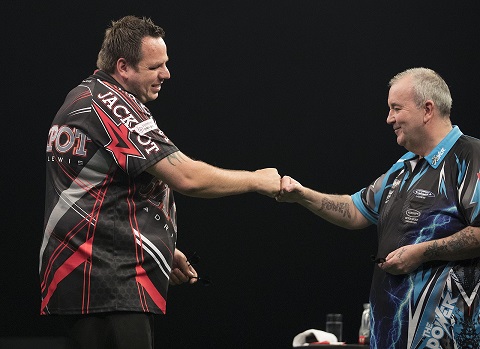 Taylor secured qualification for the Play-Offs in his final Premier League season with a 7-5 win over Stoke rival Lewis .
Lewis missed double 12 for a nine-dart finish early in the game but led 4-2 with the aid of a 122 bull checkout, only to see Taylor win five of the next six legs - despite a 114 finsh from his rival - for victory.

"I'm over the moon to get to The O2," said Taylor. "It's an extra bonus for me, I didn't expect to get there to be honest, so it's massive. "There's no pressure on me but I'm going to be trying to win it and I've done it six times before. "I'll have a massive smile on my face because I've been dedicated for 30 years and it's time for me to move on, but I'm in it to win it next week and I'm looking forward to it. "If I can go out there and win my seventh Premier League title it will be brilliant." 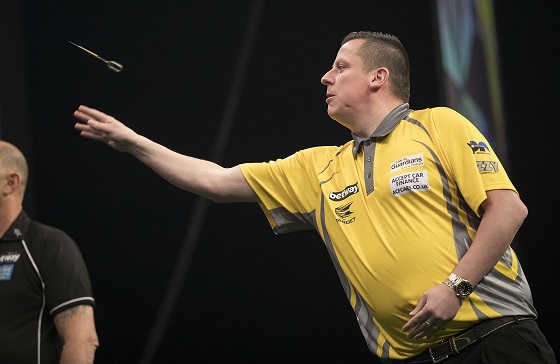 Earlier, Chisnall's draw with Wade ended the 2015 semi-finalist's bid to snatch a top-four finish, despite finishing the season with a seven-game unbeaten run.
Chisnall had to secure a big win to put the pressure on Taylor, but saw Wade capitalise on his missed doubles to move 3-1 up, with the aid of a clinical 71 finish. Wade then hit his fourth 180 as he moved into a 6-2 lead to secure at least a point from the contest. Chisnall, though, took leg nine to keep his hopes in the match alive, before finishing a brilliant 129 and a 13-darter to force a deciding leg, in which he hit two 180s in an 11-dart finish to snatch a share of the spoils.

Chisnall ended the game with seven 180s, but admitted that a slow start against Wade cost him. "I couldn't hit a double in the early stages and didn't really play in the first six or seven legs," said Chisnall. "At 6-2 down, I had nothing to lose and I managed to fight back and get the draw. "The season has been good in the end. I've been playing well for eight weeks and wish I'd started like that, but it gives me great encouragement for the remainder of the season."

Van Gerwen's clash with Anderson - which is also a repeat of the World Grand Prix, World Championship and Masters finals of the past year - will open next Thursday's Play-Offs, before Wright takes on six-time Premier League champion Taylor.
The tournament will then conclude with the final at The O2, with a 250,000 pound prize on offer for the eventual champion.
Van Gerwen is the 4/7 favourite with sponsors Betway to win the Premier League title next Thursday, with Wright 9/2, Anderson 5/1 and Taylor rated at 11/1.