GARY ANDERSON secured a Betway Premier League Play-Off place with a 7-3 win over James Wade on Thursday, as Phil Taylor overcame Michael van Gerwen with a memorable victory at The Sheffield Arena. 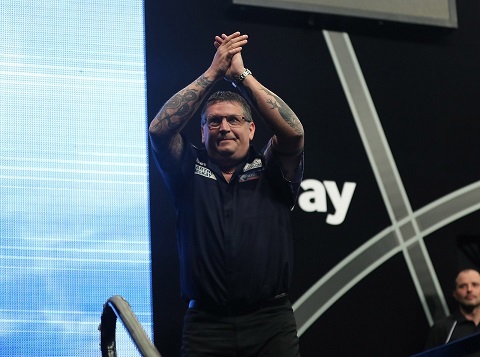 Two-time Premier League champion Anderson will join Van Gerwen and Peter Wright in the semi-finals at The O2 in a fortnight, after a third win in his last four matches sealed a top-four finish.
Anderson took five of the game's first six legs, hitting two 180s and a key 90 finish in the process, before holding off a Wade revival to finish 78 and double two for the crucial victory.

"I knew that I just needed one more win and I was really nervous tonight and it was a bit of a struggle, but I got there in the end," admitted Anderson. "Getting into the top four is everyone's aim at the start of the season so that's the main bit done. "I'm through now and that takes the pressure off next week when I play Michael in Aberdeen - but we don't want to lose to each other and it should be special." 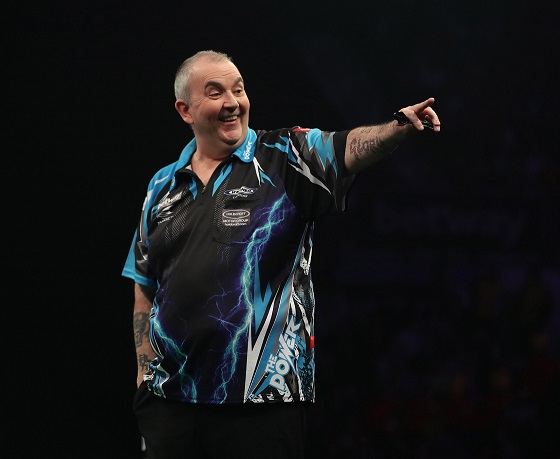 The visit to Sheffield saw Taylor deny Van Gerwen the chance to secure top spot in the league table with a 7-3 win which also sees the six-time champion maintain his fourth place in the race for Play-Off spots.
After missing three doubles to win the opening leg, Van Gerwen hit back to lead 2-1 only for Taylor to seize the initiative with a superb 96 finish of single 20, double 18 and double top to level. Taylor then took the next four in a run which included an 11-darter and a 90 finish following three further misses from Van Gerwen, who rallied briefly with an 11-dart finish of his own before the Stoke legend completed the win.
Taylor now sits in fourth place, two points clear of Dave Chisnall going into next week's final league night in Aberdeen - meaning that he needs just a point from his game with Adrian Lewis to secure qualification for the Play-Offs in his farewell season.

"Michael's a tough opponent but it was a strange game," said Taylor. "A couple of times Michael went for the bull when he should have left a finish with three darts, which I think put him under pressure. "I think the 90 finish won me the game in the end and it's another two points. To play Michael and beat him is a massive buzz. "It's in my own hands and it will be fantastic if I make it into the Play-Offs. I went up there to enjoy it tonight because I've not got as much pressure on me, and when you're more relaxed you can enjoy it a bit more. "I'm not going to take anything for granted and I've got to get ready for Aberdeen because Adrian could play out of his skin." 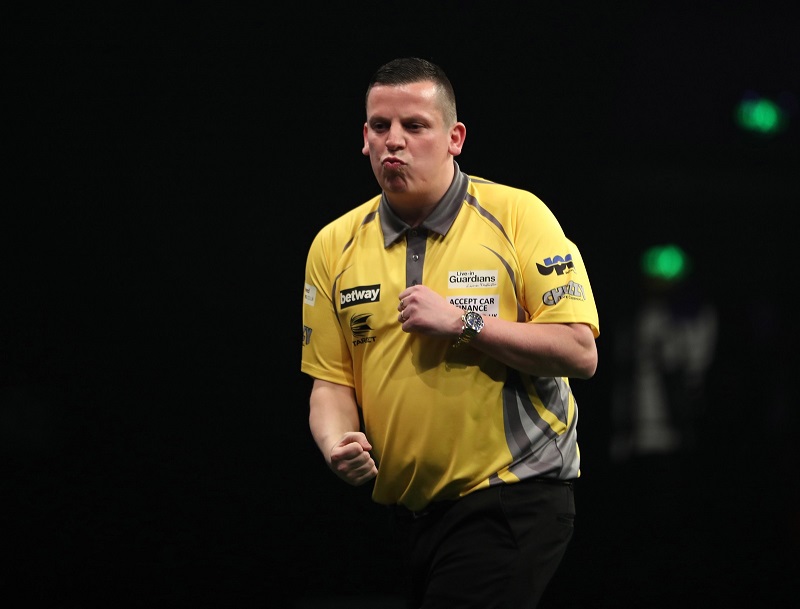 Chisnall's push for a semi-final spot continued as he extended his unbeaten run to six games by defeating Raymond van Barneveld 7-5, averaging over 109 in the process.
Van Barneveld defied two 180s to win the game's opening leg, hitting a maximum of his own, and also led 2-1 before Chisnall took three in a row to push himself clear, with the burst including a superb 142 checkout. A pair of double eight finishes pulled Van Barneveld level, but Chisnall took the next two to move 6-4 up and secure a point, and though the Dutchman finished 70 to send the match into a decider, a 64 finish continued the St Helens ace's Play-Off challenge.

"I'm happy to get the win," said Chisnall, who eliminated Van Barneveld in the process. "Raymond let me off by missing a few bulls but I missed a couple of doubles too. "I've been playing well lately and I could have had 12 points, but I had the three draws that I could have won. I'm in a very good position but I've still got to win next week. "I'm in with a chance and it's exciting. I've been playing well for the last six or seven weeks and I could have had six wins, but that's darts. I know I can do it but I've got to win the last game against James and I want to keep playing like I am." 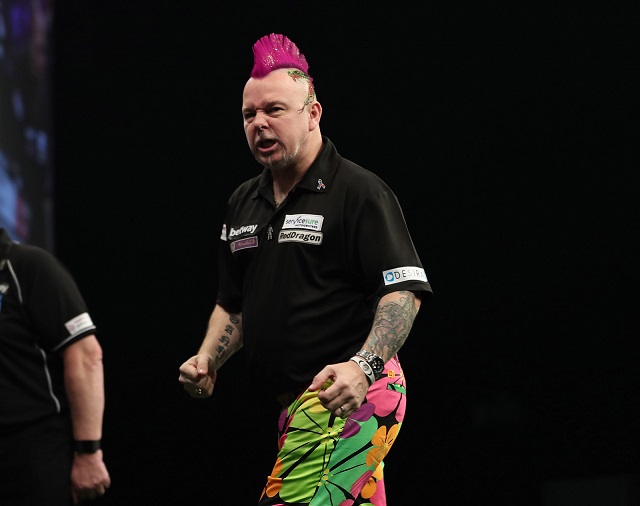 Wright, meanwhile, sits just a point behind Van Gerwen in the battle to claim the 25,000 pound League Winner's Bonus after he ended Lewis' Play-Off hopes with a 7-2 victory.
Legs of 13 and 14 darts gave Wright an early 2-0 lead, despite a pair of maximums from Lewis, before the 2011 runner-up hit back to level. Wright, though, landed a 180 of his own as he took the fifth and pounced on two missed doubles from Lewis to break and take a 4-2 lead, before reeling off the next three legs to complete his ninth win of the season.

"The plan was to come and get the win and I've done that, and I wanted to keep the pressure on Michael," said Wright. "This wasn't my best performance and I couldn't settle into the match, but Adrian wasn't on form like he can be and any player in the Premier League would have punished him. "It's great to be going to The O2 but I also want to finish top too."