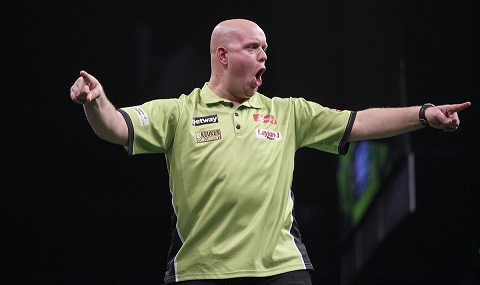 PHIL TAYLOR hit back from 5-1 down to claim a draw against Michael van Gerwen in the Betway Premier League on Thursday, as Gary Anderson picked up a Glasgow double with wins over Adrian Lewis and Peter Wright.

World number one van Gerwen and 16-time World Champion Taylor both travelled to Scotland with five successive victories under their belts, and remained locked at the top of the league table after a thrilling stalemate at The SSE Hydro.
Van Gerwen capitalised on four missed doubles from Taylor to win the opening leg, before taking four in a row as he opened up a 5-1 lead over the Stoke legend. An 84 bull finish from Taylor fired his challenge and he followed a 14-darter with a 120 finish as he cut the gap to 5-4 - only for van Gerwen to produce a show-stopping 170 checkout as he secured a minimum of a point. Taylor, though, refused to buckle and punished van Gerwen for missing three match darts by completing a 14-darter to force a deciding leg, which he won with a brilliant 12-darter to snatch a draw. 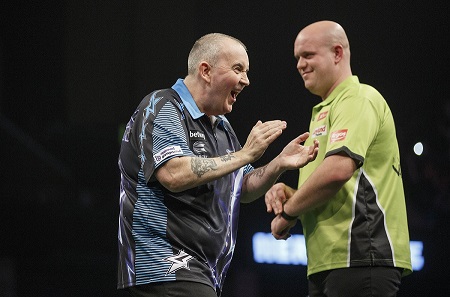 "I gave a point away today," said van Gerwen. "I was the better player but I missed darts for the match and I can only blame myself because I wasn't focused enough for some reason and Phil came back really well. I'm still happy with a point but I'll try even harder next week because I can do loads better than this."

Taylor admitted: "I loving every minute of it at the moment. Michael's a fantastic player and he's inspiring me at the moment, so to get a draw against him is like winning the lottery. The first leg blew it for me but I'm after him and it's exciting for me. We'll have a lot more battles and it's brilliant." 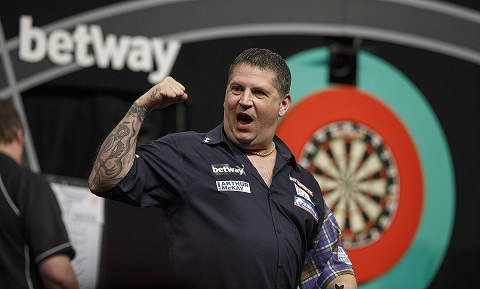 Reigning Premier League champion Anderson, meanwhile, picked up four points to delight a sell-out 10,000 crowd in Glasgow as he saw off Lewis 7-4 and then edged out Wright 7-5 in a thriller. The double saw the World Champion extend his winning streak to five straight matches as he moved into third place, a point behind van Gerwen and Taylor.

"I would have been happy just to pick up two points from the two games tonight so four's a bonus," said Anderson. "I'm up there in the table now so I'm happy, and to walk out and hear a reception like I got tonight was fantastic. I played well and that's what you want to do in front of your home crowd. It always puts extra pressure on me but I'm happy I gave them plenty to cheer." 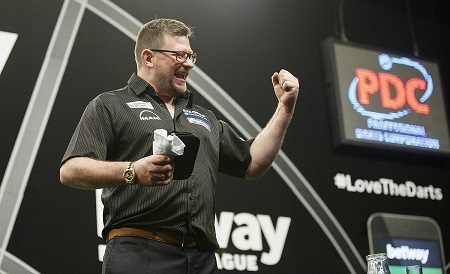 James Wade, the 2009 champion, picked up his third successive victory, and a fifth of the season, as he defeated Robert Thornton 7-4, averaging over 100 and taking out a 124 finish as he left the Scot two points adrift at the foot of the league table.

Wade is now fourth in the league table, and he said: "It was a good win but Robert didn't get going and I made the most of my opportunities early on. The game came alive towards the end and we both played really well, and I'm really happy." 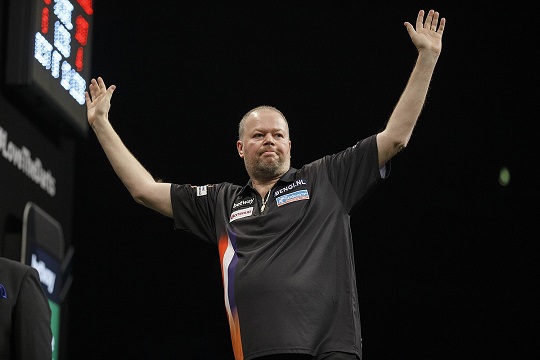 Five-time World Champion Raymond van Barneveld took out finishes of 121, 161 and 152 as he defeated Dave Chisnall 7-4 in a key game for both players, with the Dutchman pulling three points clear of the battle to avoid elimination on Judgement Night in two weeks' time as he averaged 104.90.

"I'm really happy with this performance and it's a really big result," said van Barneveld. "I'm on six points now and this could be a really important two points. I'm extremely happy with the 105 average and I know what I can do. My set-up is right and I believe in myself, and if you do that then anything can happen."

Michael Smith missed the night in Glasgow after he doubled up in Leeds to cover for Anderson's absence, while next week's visit to the Echo Arena in Liverpool sees Wade sit out as Thornton plays twice on the night following his absence through illness in Newcastle earlier this season.