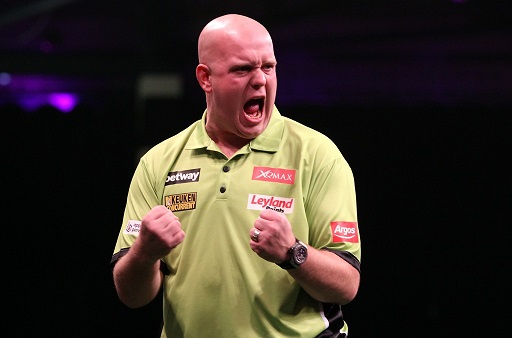 MICHAEL VAN GERWEN smashed the world record televised average with a stunning new standard of 123.40 as he stormed to a 7-1 win over Michael Smith in the Betway Premier League's visit to Aberdeen on Thursday night.

Van Gerwen powered past Phil Taylor's previous best of 118.66, set against Kevin Painter at the 2010 UK Open, with an unplayable performance to delight a capacity crowd at the GE Oil & Gas Arena. The Dutchman fired in legs of 11, 12, 11 and 12 darts to open up a four-leg lead in just over four minutes, before hitting back-to-back ten-dart finishes to push his average above 135 in-running. Three missed doubles to record a whitewash win allowed Smith in to finish 116 in the seventh leg, but double 16 in the next sealed van Gerwen's incredible performance, as well as his third successive win this season.

"It's fantastic," said van Gerwen, who could have averaged 136 had he landed double 18 to win the seventh leg. "I'm always thinking about 110, 115 averages but not 123! I felt confident straight away and I played well from the start, so I'm happy with my performance and it was an amazing game. When I was 6-0 up I realised I could make some records and I missed a couple of doubles. If you play like this it's amazing and I'm really glad it came out tonight. I hope I can do this many more times in the future."

A night of stunning quality also saw Taylor average 115.25 in his 7-5 victory over Dave Chisnall in another exceptional contest - with the six-time champion recording the 11th highest televised average in history to respond to van Gerwen. Chisnall led 3-1 at one stage and hit three 11-dart legs during the game, but Taylor took out a key 126 in his revival before capitalising on his rival's two misses to snatch a draw by returning on double eight to claim the win in a dramatic decider.

"Everything's coming together and I'm so pleased I played well tonight," said Taylor. "I'm trying hard and every time I looked Dave seemed to be hitting a 180. I'm over the moon to win - it's all about scrambling to make the cut, and I've got six points in the bag." 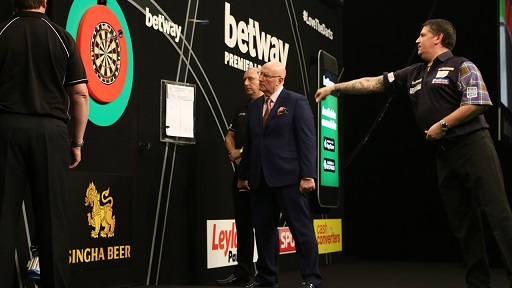 Reigning Premier League champion Gary Anderson had earlier brought the 4,000-strong Aberdeen crowd to its feet with a memorable 7-3 win over Raymond van Barneveld to get his season back on track. The World Champion had lost his two matches since missing the opening week through illness, but was back to his heavy-scoring best to see off the Dutchman with a 103.34 average as he took five of the game's final six legs.

"It's not often we get to Scotland and when we do get here you want to play well and win, but once the crowd started singing and changing I found it really hard to concentrate," said Anderson. I've never had a reception like that - I was shaking." He added: "Turning up to Aberdeen with no points wasn't good. I needed to get a point and to get two's a bonus against Barney. I need to get back on the practice board but although I'm not 100 percent I'm getting there." 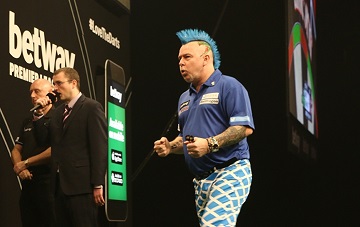 Peter Wright remains a point clear of van Gerwen, Adrian Lewis and Taylor after he continued his unbeaten start to the season with a draw against Robert Thornton, who picked up his first point of the campaign. A mid-game surge had seen winless Thornton take three successive legs for a 6-4 lead, but Wright battled back to claim a share of the spoils from the all-Scottish clash. 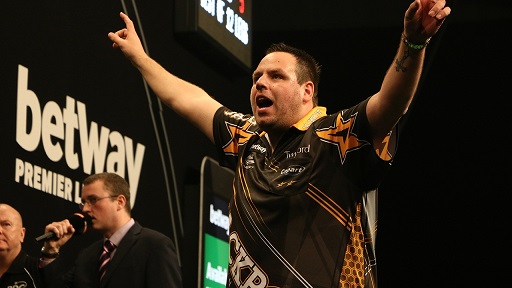 Lewis, meanwhile, continued his strong start to the season by claiming his third win out of four matches in another thrilling contest as he edged out James Wade 7-5. Wade led 2-0 at one stage and took out 120 and 121 in successive legs to open up a 5-3 lead, but Lewis finished 142 and an 11-darter to move 6-5 up before taking the deciding leg on double one after the left-hander missed eight darts for a draw.

"I'm really pleased with that," said Lewis. "I couldn't score much better than that and I want to keep this going. Both of us were playing really well and James took out some massive finishes and it came to the last leg and neither of us could get over the line - but I got away with it."