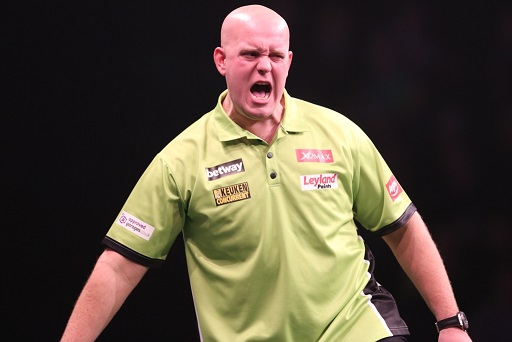 MICHAEL VAN GERWEN and Phil Taylor stormed back to form in the Betway Premier League with 111 averages in victories in Newcastle on Thursday, as Adrian Lewis and Peter Wright maintained winning starts to the season.

World number one van Gerwen bounced back from last week's defeat to James Wade with a scintillating 7-3 defeat of reigning Premier League champion Gary Anderson. The Scot was making his first appearance of the season after being laid low in Leeds a week ago and survived an early burst from van Gerwen as he took a 3-1 lead by pulling back to trail 4-3. A swift 11-darter helped van Gerwen pull away once more before he took out 85 and 72 to complete a sensational display with a 111.88 average.

"Last week I was a bit poor but this was a good performance and I played well tonight," said van Gerwen. "It's especially nice against Gary, he's the World Champion and it's the number one and two in the world so they're always big battles. I played a fantastic game and I hope that I carry on playing like this for the rest of the season. I finished well at the right moments, my doubles were there and my scoring was there so it was a good night for me." 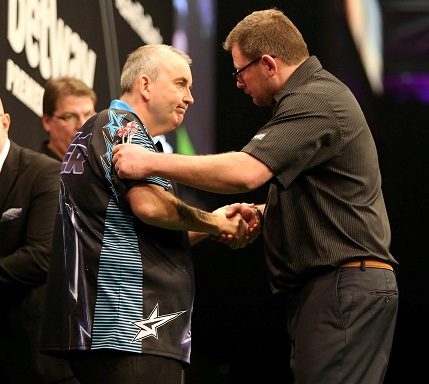 Taylor, meanwhile, responded to his defeat to Raymond van Barneveld a week ago with a superb 7-1 defeat of James Wade, averaging 111.20 and hitting seven doubles from ten attempts. A killer 122 checkout for a 12-darter in leg four - after Wade scored 180, 140 and 140 to leave 41 - proved crucial as Taylor cruised to an impressive victory.

"My finishing as lovely and I think that was the difference tonight," said Taylor. "I'm glad to get two points on the board and Barney gave me a kick up the backside last week. James pushed me into that performance and it was a lot closer than the score says, but I produced the goods tonight." 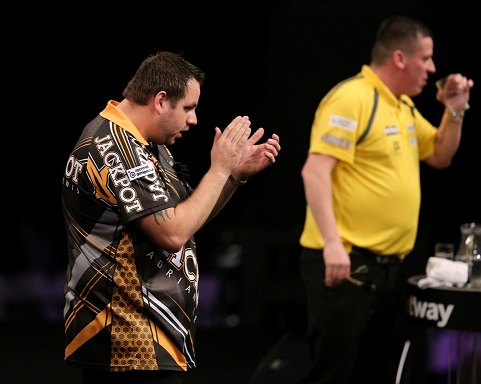 Adrian Lewis picked up a second successive victory as he held off a late rally from Dave Chisnall to claim a 7-4 win in their clash, having led 6-1 following some clinical early darts.

"It's a great start," said Lewis. "I'm playing really well and I didn't really expect else tonight other than to go up there and do a job, although Chizzy's been great in the Premier League and you can't underestimate him. I relaxed at 6-1 for some reason - perhaps in my head I knew I'd got a point - but when I needed it under pressure I fired in with that 12-darter at the end. I can't ask for any more with my form and that showed in patches tonight." 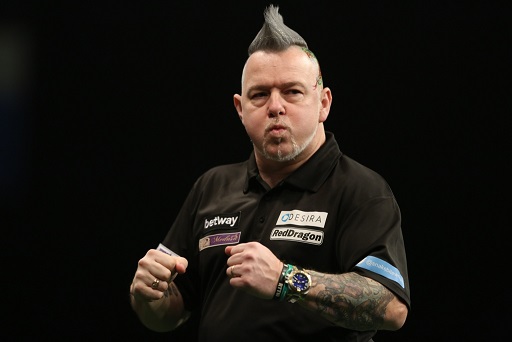 Peter Wright also sits with two wins from as many matches after he edged out Raymond van Barneveld 7-5, although he had to claim five of the final six legs after finding himself 4-2 down early on.

"I'm really happy with the result and it's another two points," said Wright. "I didn't think I played particularly well but I'd changed darts and that didn't work out like I wanted so I'll be going back to my other darts next week!" 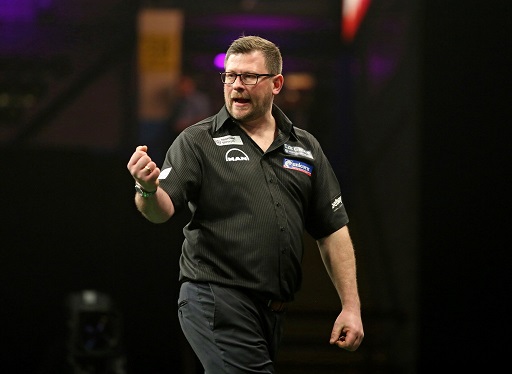 With a chest infection ruling out Robert Thornton, Wade stepped in to play twice on the night as he picked up a second win of the season by inflicting a third straight defeat on Premier League newcomer Michael Smith with a solid 7-4 triumph.

"I'm glad I won but Michael hasn't found his feet yet," said Wade. "It's never nice to play someone when they're feeling the pressure and Michael's better than he showed there tonight."