MICHAEL VAN GERWEN secured his place in the Betway Premier League Play-Offs and moved ahead of Phil Taylor at the top of the league table with a brilliant win over James Wade in Birmingham as Gary Anderson and Peter Wright both picked up three points on Thursday night. 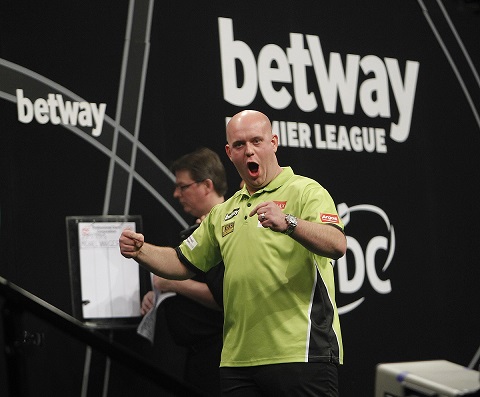 With Taylor's 12-game unbeaten run being ended by Peter Wright in the opening fixture at The Barclaycard Arena, van Gerwen capitalised as he swept past James Wade 7-1 with an average of 108, clinically finishing seven doubles from nine attempts.
The Dutchman took command by claiming the first four legs without reply, and though Wade rallied in leg five, the world number one took the next three to extend his unbeaten run to 13 matches since his opening-night defeat to the left-hander.

"I think I played really well and it's great to be back on top of the table," said van Gerwen, who is ahead of Taylor on leg difference. "Any shot James gave me tonight I took out and it was a good average so I'm really pleased with this. It puts the pressure back on Phil again. He made a mistake when he lost but you always want to be top of the table. I had to do really well to catch Phil and I took advantage, and I hope I can hold this position now." 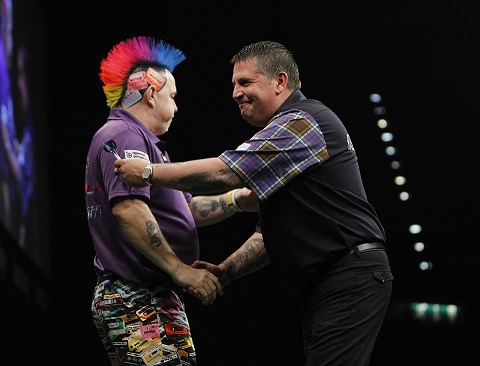 Reigning Premier League champion Anderson defeated Raymond van Barneveld 7-5 in his opening game of the night in Birmingham - ending the Dutchman's Play-Off hopes - before returning to the stage to draw with Wright as he put one foot into the Play-Offs on 18 points.
Anderson now sits four points clear of Wade and Wright with two matches remaining as he continues his challenge to retain the coveted title.

"At this stage any point is worth it's weight in gold so I'll take three out of four," said Anderson. "I pinched it against Barney and then I was 5-3 up against Peter but the wheels came off a little at the end, and he stuck in there and took his chance at the end. I'm still in a good position and I'm not going to rest on my laurels and I'll be trying to win the last two games to make sure I'm in the Play-Offs." 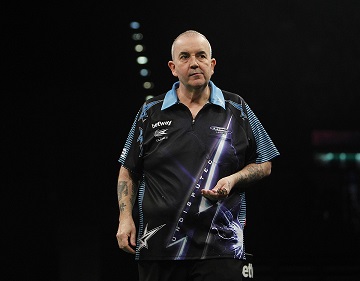 Wright kicked off his double-header with a superb display to defeat Taylor 7-4 as the 16-time World Champion suffered defeat for the first time since the opening night of the season, despite averaging over 106 per visit in a high-quality contest.
Taylor landed a ten-dart finish in the game, but Wright followed up early checkouts of 121 and 104 by winning four of the final five legs for the win as he ended the game with seven doubles from just eight attempts. Wright later battled back from 5-3 down to draw with Anderson, leaving him three points adrift of fourth-placed Adrian Lewis going into the final two league nights. 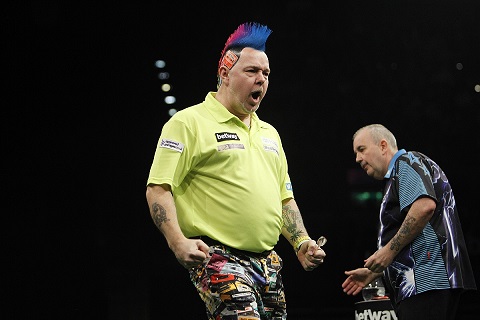 "I wanted both wins because that would have helped me out but I'm happy with three points," said Wright. "I showed a lot of bottle to do what I've done tonight against two great players. To play the 16-time World Champion and get the win was special, and I had to dig deep and work hard. I'll do my best to win my last two games and I'll see what happens."

Lewis, meanwhile, consolidated fourth place with a 7-2 defeat of Robert Thornton, with the two-time World Champion bouncing back from his double defeat in Bournemouth a week ago with a composed performance.

"It was a massive game tonight," admitted Lewis. "I had to beat Robert tonight and I got up there and did the job. He's been playing well recently so I had to be ready for him and I turned up well. I felt comfortable and I thought my finishing was great when it needed to be so I'm pretty happy with that. I took advantage and I was pretty clinical."