PHIL TAYLOR secured his place in the Betway Premier League Play-Offs with a win over Robert Thornton in Bournemouth on Thursday, as Michael van Gerwen all but qualified for next month's semi-finals with two victories on the south coast. 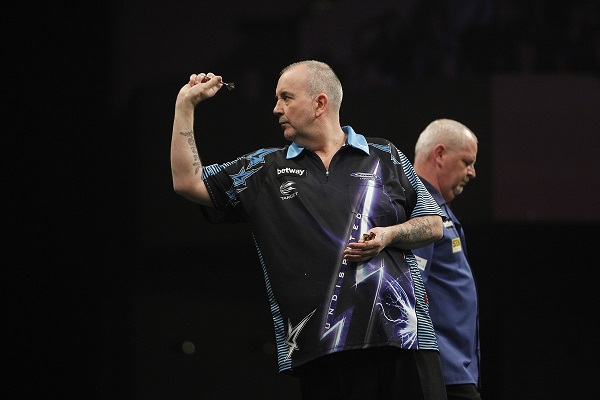 Taylor followed up his whitewash of Thornton earlier this season with a 7-2 success in front of a sell-out 3,500 fans at the Bournemouth International Centre, which included former England footballer Paul Gascoigne, to extend his brilliant unbeaten run to 12 matches.
The six-time Premier League champion has now secured his place in next month's Play-Offs at The O2 in London, and has achieved his first aim of 2016 after missing out on the top four for the first time in the event's history last year.

"I'm very happy to have qualified for the Play-Offs because with the field that we've got it's hard work," said Taylor. "I'm over the moon to be at The O2, it was the aim at the start of the season and it's sent a message out to the rest of the players. I want to push on now and make sure that I finish top and I'll keep working hard. This wasn't my best performance and it was difficult but I got the win and that was all that mattered." 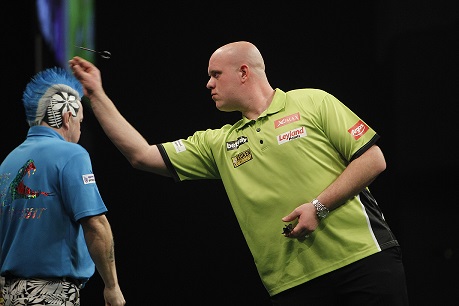 Van Gerwen, meanwhile, followed up a fine 7-2 win over Peter Wright in the night's opening fixture before edging out Adrian Lewis 7-5 - after the Stoke ace took out 142 in hitting back from 4-1 down to level - to also extend his unbeaten streak to 12 games. The Dutchman now sits six points clear of James Wade with three games remaining in the league season, meaning that he needs just a point from his clash with the left-hander in Birmingham next week the mathematically secure his Play-Off spot.

"Getting the four points was the most important thing and I'm really pleased with that but I wanted to play better," said van Gerwen. "I did my job and I knew that the game against Adrian was very important and maybe I was trying too hard, so need to relax. I've worked really hard but it's not finished yet and I'll look forward to next week and prepare for James Wade. I feel fantastic and I'll play better next week. I want to win everything and I don't like losing, so I'm doing everything I can to finish at the top of the table and I won't give up on that." 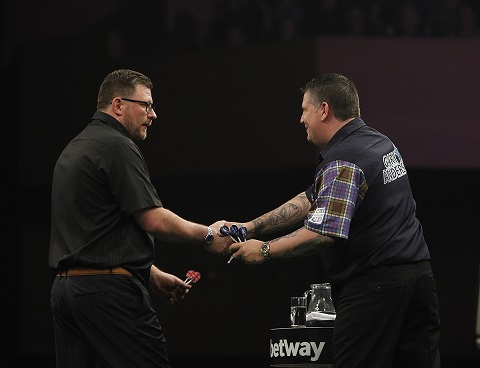 Reigning Premier League champion Gary Anderson paid the price for missing six match darts against James Wade as the 2009 winner clawed his way back from 6-3 down to claim a draw which sees him remain a point behind the Scot and Lewis in the hunt for a top-four spot.

"I'm really happy with the point," said Wade, who remained fifth. "Gary missed a few doubles at the end and I'm sure he's disappointed, I think the draw was about right. I'm trying to relax and enjoy it - there were two or three games that I should have won and I didn't, which would have put me six points in front of where I am - but I'm not so I'm going to relax, enjoy myself and see how it goes." 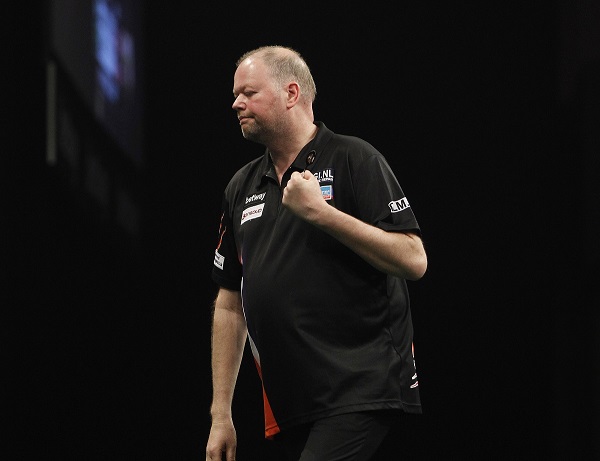 Raymond van Barneveld kept alive his hopes of breaking into the top four with a second successive victory, with a key 141 checkout for the only break of throw in his clash with Lewis helping him to a 7-4 victory.

"It's a good two points," said the Dutchman, who turned 49 on Wednesday. "Last week I said to myself that maybe I wasn't going to make the top four, and even though I can I was more relaxed this week. Adrian wasn't at his best but I'm happy with the win. If I keep on winning my matches then maybe I can still get into the top four but I've got to see how it goes from week to week." 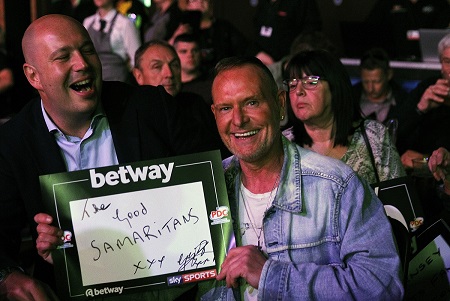