PHIL TAYLOR extended his unbeaten run in the Betway Premier League to ten matches by defeating Gary Anderson and James Wade as he doubled up at the Sheffield Arena on Thursday, as Michael van Gerwen recorded the third highest televised average in history. 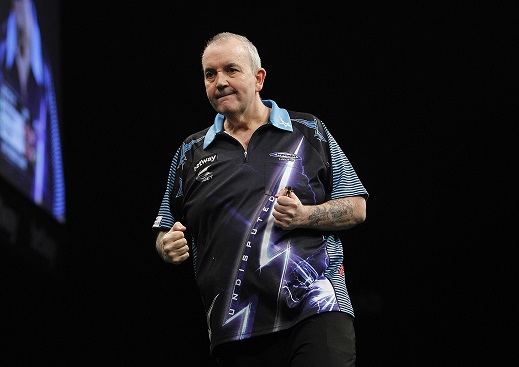 Taylor moved three points clear of van Gerwen at the top of the Premier League table as he enjoyed a perfect night in Yorkshire to continue his superb run of form.

The 16-time World Champion firstly overcame reigning Premier League and World Champion Anderson 7-3 as he reeled off five straight legs in their contest, capitalising after the Scot missed a chance to move 4-2 up by pouncing in clinical fashion. Taylor then returned to the stage later in the evening to face Wade in a repeat of two previous Premier League finals, and he completed a season's double over the left-hander with a 7-4 triumph.

"I'm over the moon and it's another four points and a step closer to getting into the Play-Offs," said Taylor. "I think another one or two wins will put me through and that's what I'm after. Gary Anderson was the first stepping point. At three-each it was a close match and then he let me in, and I took advantage of him. It was hard in the second match against James, it's difficult but you've got to do it and to get the two points from that game is lovely." 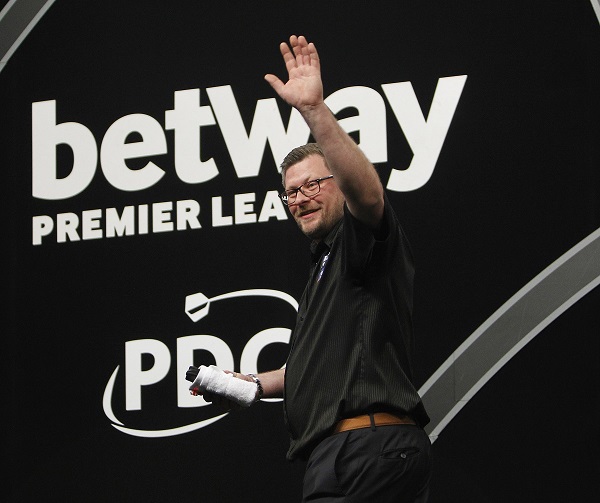 Wade had kicked off the evening with a 7-4 defeat of 2014 Premier League champion Raymond van Barneveld, who now sits six points adrift of the Play-Off places after the Aldershot ace claimed the final three legs without reply from their contest. 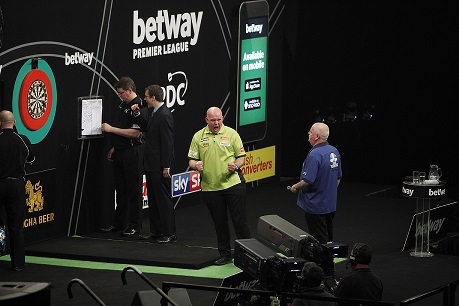 World number one van Gerwen followed up his achievement in hitting the highest televised average in history earlier this season of 123.40 by landing the third-highest ever of 117.95 as he edged out Robert Thornton to respond to three successive draws in stunning fashion.
World Grand Prix champion Thornton hit back from 5-1 down to trail just 6-5 with a gutsy display, but van Gerwen produced an 11-darter in the deciding leg, to follow an earlier ten-dart finish, as he claimed the two points.

"It was a very tough game and Robert played really well and made it difficult for me because he never gives up," said van Gerwen, who hit five 180s in the final four legs of the contest. "I had to play well and I'm really glad I did at the end. The average is amazing, especially because I missed a few doubles, and it's a pleasure to play this well again and to get the two points again. After three draws I wanted to get the full house so I'm glad I did." 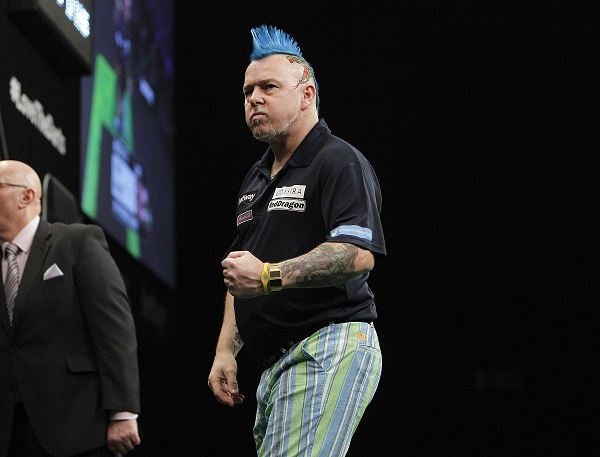 Adrian Lewis moved above Anderson into third place in the league table after snatching a draw with Peter Wright, who broke throw to move 6-5 up only to then miss five darts to claim the win in the deciding leg.

"It's frustrating," admitted Wright. "I was trying to go out for the win but I couldn't get anything going - it was a bad day at the office. We were both below our best but the point will help me in the league table."