MICHAEL VAN GERWEN came from a set down to storm into the partypoker.com World Grand Prix quarter-finals with a 3-1 defeat of Kim Huybrechts on Tuesday night, as Jamie Lewis, Jelle Klaasen and Mark Webster caused second round upsets in Dublin. 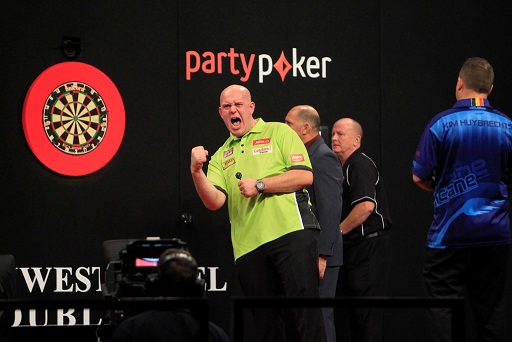 Reigning champion van Gerwen is aiming to collect a third triumph in the double-start tournament at the Citywest Hotel, but overcame an early scare before seeing off Huybrechts.
The Belgian ace came from a leg down to win the opening set 3-1 with the aid of two 180s, and also came from two legs down to send the second set into a decider. Van Gerwen, though, fired in a key maximum as he edged the set 3-2 to level before replying to Huybrechts winning the third set's opener with a 160 checkout. That finish was followed by a missed bullseye from Huybrechts in the third leg as a third-dart double 16 moved van Gerwen 2-1 up and double ten sealed the set before the world number one raced through set four without reply to complete his fight back.

"I'm really glad I won but it wasn't the performance I wanted and I struggled to hit double top at times," said van Gerwen, the 2012 and 2014 champion. "I felt fantastic in the practice room but I was a bit nervous when I got on stage. I didn't want to lose and I'm still in the tournament, which is the most important thing. I was annoyed with my own game because I can perform a load better than this but the win will give me confidence. I want to retain this title and make this the hat-trick, and I know I can do that." 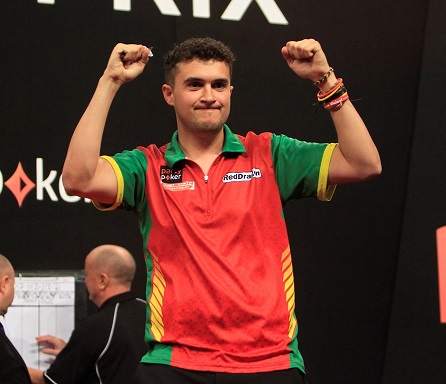 Van Gerwen now meets Jamie Lewis in the quarter-finals, after the Welsh youngster knocked out Michael Smith in one of three other second round games which saw a player from the world's top ten eliminated.
Number eight seed Smith made a superb start by winning the opening set without reply - including checkouts of 96 and 92 - before edging the second set 3-2. Lewis, though, took out 95 to win the deciding leg of the third set before taking the fourth 3-1 to send the game into a one-set shoot-out. Smith led 1-0 as the Welsh ace missed three darts at doubles, but Lewis regained his composure to take the next two before winning the deciding leg with a superb 108 finish to reach his first major TV quarter-final.

"I'm over the moon," said Cardigan-based Lewis. "At 2-0 down I thought it was game over so I'm really chuffed to come back and win. I felt a bit edgy and at 2-0 down I had nothing to lose. I've learned over the years that at 2-0 down the game's not over until they hitting the winning double, so that was in my head tonight and I managed to get the job done in the end. I'm really pleased. In the last year or so, I've felt as if I belong playing in the TV majors and I'm trying to make myself an established player, and it's going well so far." 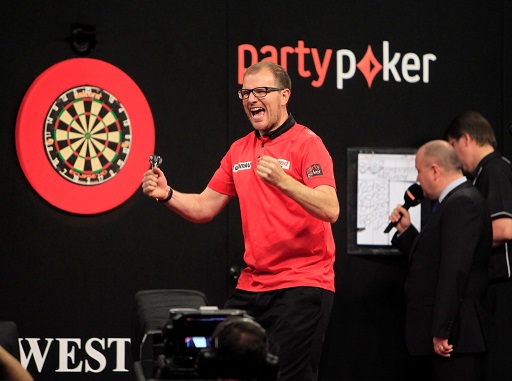 World number five Adrian Lewis suffered a straight sets defeat to an inspired Mark Webster, who won through to his first major quarter-final for 18 months as he averaged almost 92 in the double-start format in a confident display.
The Welsh left-hander swept through the first set without reply and came from a leg down to win the second 3-1 courtesy of a 104 checkout in the fourth leg. Lewis shared the opening two legs of the third set, but Webster landed a key 180 in the third leg before hitting tops in the next to seal his last eight spot.

"It was a solid performance and it's great to be in the quarter-finals," said Webster. "Adrian wasn't at the races but I was there to take my chances and I did the job. I've shown before that I can beat these big players if they don't perform, and I'm in the quarter-finals now and enjoying it. I've got Jelle Klaasen next and it's going to be tough but I've got the game to beat him, and I've got nothing to lose. He'll start as the favourite and I'm happy being the underdog, so I've got to pile on the pressure and make him think." 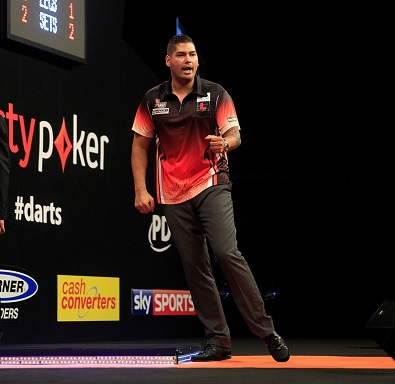 Webster will now face a fellow former Lakeside Champion, Jelle Klaasen, in Thursday's quarter-finals after the Dutchman saw off Dave Chisnall in a five-set thriller.
After Klaasen won the opening leg with a 13-darter, Chisnall levelled with a 103 finish and edged the set in the deciding leg, only for his opponent to take the next two sets with 3-1 scorelines, finishing 129, 134 and 132 in the process. Klaasen also took out 100 in the fourth set, but Chisnall held his nerve in the fifth leg to take out a key 71 as he sent the match into a decider. Klaasen, though, landed two 180s and a 177 as he took the set 3-1 to continue his fine year on the circuit with a first Dublin quarter-final.

"I'm feeling very good but it was such a tough game," said Klaasen. "I didn't miss many doubles to start the legs and I finished well, so I'm very happy with my game. In the middle of the game Dave out-scored me a bit and I needed the big finishes, so luckily I hit them."
Klaasen added: "Two years ago I didn't win a leg against Gary Anderson, so to be in the quarter-finals is the result of all the work I've put in. I've practised a lot for the past 18 months and it's paying off. I feel good, and if I keep hitting double 18 like I did in this game then I can go far."