MICHAEL VAN GERWEN overcame a scare against Keegan Brown as he opened the defence of his partypoker.com World Grand Prix title with a hard-fought 2-1 win on Sunday night, as Dave Chisnall, Michael Smith and Jamie Lewis prevailed in sudden-death legs. 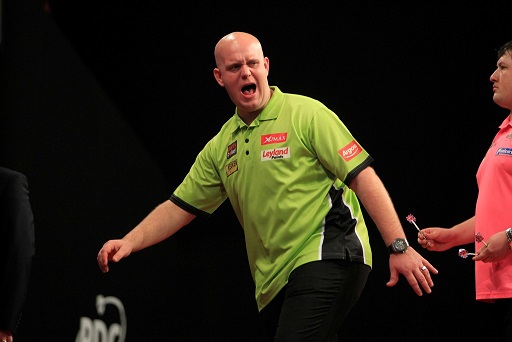 World number one van Gerwen had looked set to cruise through to the last 16 at the Citywest Hotel when he took the opening set without reply against the World Youth Champion and also led by a leg in the second set.
Isle of Wight youngster Brown hit back with three successive legs to send the game into a third set, and then took out a superb 152 finish to level in the decider - but van Gerwen sealed victory with legs of 13 and 14 darts to progress.

"My doubles were good in the first set but then my level dropped and I put myself under pressure, but Keegan put me under pressure too in that second set," said van Gerwen, who landed five 180s. "I let myself down in the second set and that shouldn't happen, especially in a format like this, but it's nice to know that I've got an extra gear and I played a fantastic last set. My confidence is good and I want to defend my title." 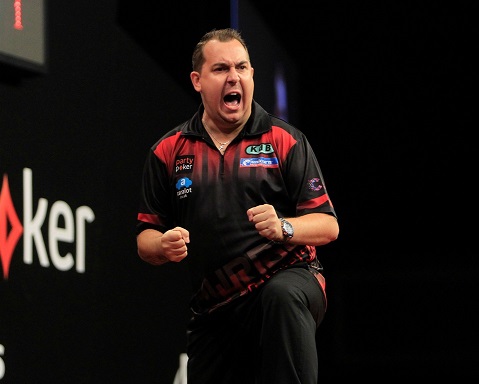 Belgium's Kim Huybrechts won his first game at the World Grand Prix in four attempts as he came from a set down to defeat Benito van de Pas with six straight legs as he swept into the last 16.
Huybrechts led 2-1 in the opener, only to see van de Pas punish three missed set darts by finishing 100 to claim the lead, and the Dutch debutant also led in the second. Huybrechts responded superbly, levelling on double 16 before finishing 84 and 109 - for a 12-darter - to take the set before then finishing 76 and 117 to move 2-0 up in the third set as double two for the next leg sealed a second round clash with van Gerwen.

"I've been here three times before and never won a set, and I was so nervous tonight," admitted Huybrechts. "It's a big relief and we were both struggling a bit and thinking about the game, but I was strongest in the end. I'm a power scoring player and I'm a bit dodgy on doubles sometimes - and you need two doubles to win games here and that makes it even harder for players like me! The first one to win in every tournament is the hardest one, so I'm going to relax now. I'll practice a bit on my doubles to get them sharper and I'll be ready for Michael." 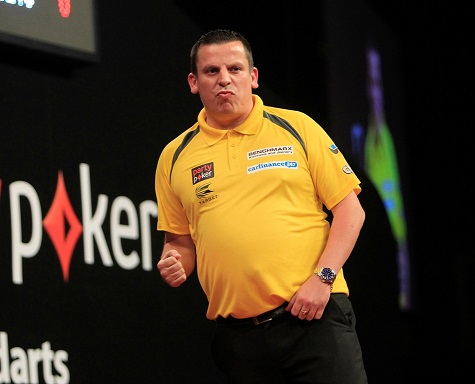 Dave Chisnall won the night's most dramatic clash as he escaped from four missed match darts from Peter Wright to snatch victory from the jaws of defeat.
Wright edged a tight opening set 3-2 after Chisnall missed two darts at double 12 in the fifth leg to claim the lead, only for the 2013 Dublin runner-up to take the second set 3-1 to level. Wright moved 2-0 up in the decider, but missed the bull for the match in leg three and the saw Chisnall finish a 13-darter to send the game into a sudden-death leg. Wright landed a 180, but missed three more match darts to allow the Premier League semi-finalist in to take out 60 on tops to claim a narrow triumph.

"It was very hard and I had to keep battling," said Chisnall. "I gave him that first set by missing the double 12 and I had to dig in, but I won and I'm happy with that. Peter was quite good with his doubles and I didn't think he'd miss at the end, but it was always going to go to the wire."

Chisnall now plays Jelle Klaasen in round two, after the Dutchman knocked out Northern Ireland's Brendan Dolan by coming from a set down to win 2-1.
Dolan, the 2011 World Grand Prix runner-up, took the opening set 3-1, but Klaasen finished 100 and 108 as he won the second set by the same scoreline and then took the final set 3-1 - despite a 125 checkout from his opponent - to progress.

Klaasen has won two Players Championship events this year in his push towards the top 16, and he said: "I've been playing well in the last few months but on TV it's not there yet. I know it will come and maybe this is the beginning. "I'm very happy and I feel confident. In the first set I missed too many doubles but I was opening well and I felt confident that I could win the game and I'm happy with the way I played. It's difficult to play against Brendan but Dave has the same rhythm as me and I hope if I can keep opening like this that I'll have a good chance to win. We're both playing well in the floor tournaments so I hope we can show it on stage."

Number eight seed Michael Smith overcame two missed match darts from Gerwyn Price before claiming a dramatic sudden-death leg win over the Welshman.
Price, on his World Grand Prix debut, kicked off the game with a 160 opening score and won the first set 3-1, but Smith hit back from a leg down in the second to level the game with two 14-darters and also found himself behind in the decider. Price led 2-0 in set three, with Smith hitting back with a 100 finish before capitalising on two misses from the Welsh ace - at double top and ten - to send the game into a one-leg shoot-out which he claimed on double 14 with a whitewash as his opponent missed 15 starting doubles.

"I didn't get going but Gerwyn let me in and I took my chances," said Smith. "I've played a lot better here and lost, so to get the win I'm happy because I've never won here before. During the game I felt like I was playing like the world number 100, but I kept telling myself that I'm the world number eight and to start playing like that, and I battled through where two years ago I'd have lost this game. I'm into the last 16 for the first time and it's the business end of the tournament. I've not proven myself on TV yet so that's my focus now."

Smith will now meet another Welshman, youngster Jamie Lewis, in the second round on Tuesday after the Cardigan-based thrower saw off Ireland's William O'Connor 2-1 in another game which went all the way.
Despite the home favourite opening with a 13-darter, Lewis took the first set 3-1 before O'Connor hit back to take the second by the same scoreline. Lewis led 2-1 in the third before missing two match darts at tops as O'Connor forced a decider, only to then miss two match darts of his own to allow the youngster back in on double five to finally take victory.

"It was a very close game and, after winning the first set, it was closer than I'd expected," admitted Lewis. "Going into that last leg I thought I was gone, but I put myself back in with a chance and managed to get the job done in the end. I'm chuffed to win that and I've been playing well, so if I can keep this up then you never know what will happen. I'll take each game as it comes and try to get as far as I can." 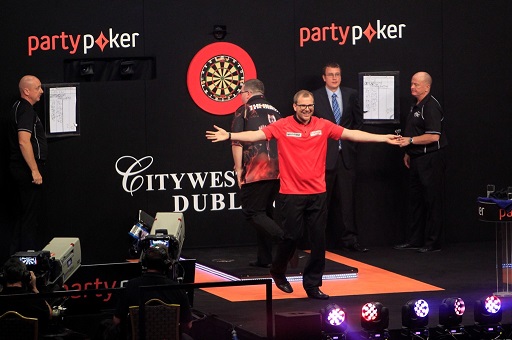 Welsh left-hander Mark Webster held off Stephen Bunting's fightback with a superb deciding set as he moved into the second round with a 2-1 up.
Webster - who is battling to maintain his top 32 status - came from a led down to win the opening set 3-1 before Bunting found top gear to win the second set in a deciding leg, despite finding himself 2-1 down at one stage. The left-hander, though, took out 70 and 104, for a 12-darter, to move 2-0 up in the deciding set, before punishing Bunting's missed doubles by firing in tops for the win.

"I really enjoyed that," said Webster. "It was a big game but I've never lost to Stephen before and I was confident and I thought I did okay. Stephen missed too many doubles but when he got back to one set all and it was big, mentally, to get back on top and knock the stuffing out of him in the final set. I'm in the last 16 and I'm really pleased." 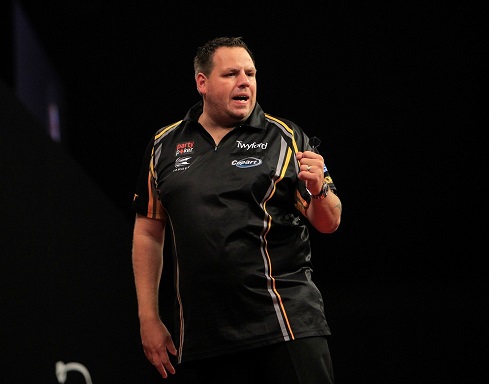 Webster now meets the number five seed Adrian Lewis, who enjoyed a comfortable straight sets win over two-time World Grand Prix finalist Raymond van Barneveld, who took only one leg in the game.
The Dutchman missed 18 starting doubles in the opening leg as Lewis took the lead, and though van Barneveld posted a 180 in the second it was his opponent who hit tops for a 2-0 lead. Van Barneveld replied on double eight, but double ten gave Lewis the set before he swept through set two without reply, landing a 177 score and a 180 as he moved into the last 16.

"It's a hard format, no matter who you play, I'll take a 2-0 win over Ray," said Lewis, the 2010 runner-up at the Citywest Hotel. "I've been putting a lot of work in and I started quite brightly."