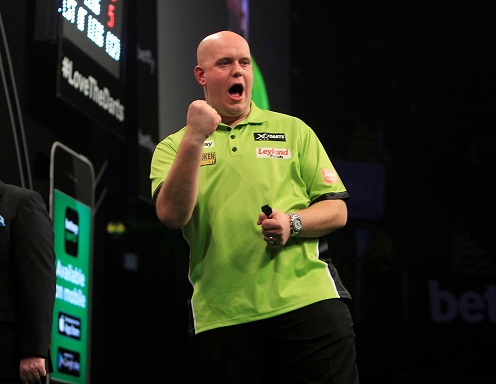 MICHAEL VAN GERWEN moved to the top of the Betway Premier League table with a superb win over Phil Taylor at Nottingham's Capital FM Arena on Thursday, as Dave Chisnall lost his unbeaten record and Gary Anderson returned to his brilliant best.

Dutch ace van Gerwen was a 7-3 winner in the clash of the world's top two ranked players as he picked up victory over his great rival Taylor to move onto ten league points for the season.
The game had bizarrely seen the opening seven legs all won against the throw - started by van Gerwen's 128 checkout - before a brilliant ten-darter from the Dutchman moved him 5-3 up with the first break of throw. Van Gerwen then punished two missed doubles from Taylor to move three legs clear before landing a 180 as he secured victory in style with a 13-dart finish.

"I had to do the right things at the right moments and I did that at the end," said van Gerwen. "I knew from the eighth leg that I wasn't going to lose and I'm very happy with my performance. To beat Phil on a stage like this feels extra good for me. Phil wasn't 100 percent on his doubles but you know he will play well because that's what he's done for 25 years. Every time I broke his throw early on I didn't hold my own throw but I think we were both thinking about the winner going to the top of the table and a bit nervous at the start. It's great to be top of the table but the most important thing is to win the tournament in May so that's my target." 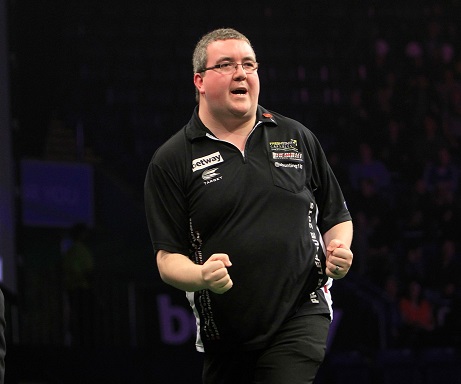 Van Gerwen's victory saw him jump above Dave Chisnall to top the league table, after the St Helens ace suffered his first defeat of the season with a 7-3 reverse to Stephen Bunting.
Bunting opened the game with a 112 checkout and moved 4-1 up before Chisnall replied with an 11-dart finish - but a stunning 164 bullseye combination saw the former Lakeside Champion restore his advantage before sealing his second successive Premier League win.

"It's nice to be back winning and I've got two wins and a semi-final in the UK Open under my belt in the last week so I'm moving onwards and upwards," said Bunting. "It's always difficult to play Dave because he's a close friend but I got one over on him last weekend in the UK Open and I just wanted to build on that. I never lost faith [in the opening four weeks] but I went up there tonight to try and do a job, get the win and the two points. Hopefully I can keep doing what I'm doing and pick up those vital points." 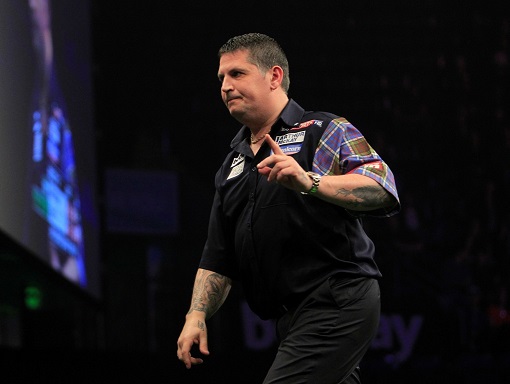 World Champion Gary Anderson jumped up to third place as he bounced back from last week's defeat to Chisnall - and a third round exit at the UK Open last weekend - by averaging 108.98 in a 7-1 romp against Adrian Lewis.
Anderson put himself in command by winning the opening three legs before Lewis hit back - but a missed bullseye in the next allowed the Scot in to take out 127 before he took the next and then finished 145 to seal an impressive win.

"The last couple of weeks have been a struggle for me but I had a good five days off after Minehead and it's done me the world of good," admitted Anderson. "Adrian's scoring tonight wasn't as good as it usually is and I managed to take advantage and it's put me onto eight points, which is a good position to be in." 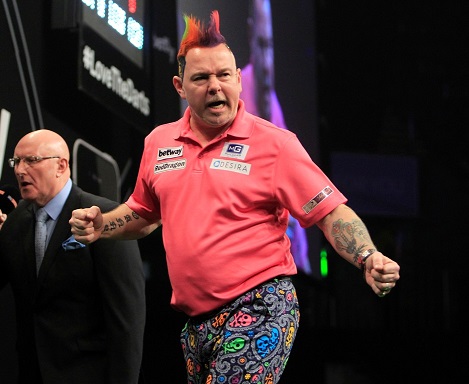 Peter Wright moved off the bottom of the league table with a narrow 7-5 win over Kim Huybrechts in a tight contest.
The game's opening eight legs went with throw before Wright broke, with the aid of a 180, in the ninth, and though the Belgian forced a deciding leg it was the former World Championship finalist who landed another maximum as he sealed his first win of the season.

"I found that the hardest match I've had this season and we were fighting for every leg," said Wright, Sunday's UK Open runner-up to van Gerwen. "I felt Kim played better but I battled it out and took my chances. I'm feeling good because I've got the right darts and the right set-up now and I'm delighted with the win." 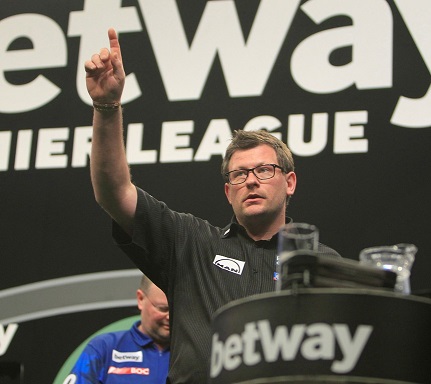 Reigning Premier League champion Raymond van Barneveld now sits level with Huybrechts in the league table's bottom two places after he went down 7-3 to 2009 champion James Wade.
Wade came from a leg down to cruise into a 6-1 lead, and though van Barneveld rallied briefly with back-to-back legs, the left-hander finished his favoured double top to seal his second win of the season.

"Raymond didn't play remotely like he can and I'm grateful for that," said Wade. "I've been ahead in the past two weeks and let it slip but Raymond left it too late tonight. I'm happy with this and I want to move on from this because I still don't feel like I've played my best yet but I believed I'd get the win tonight and I did that."