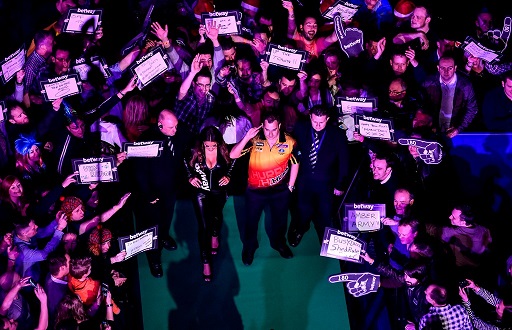 DAVE CHISNALL joined Michael van Gerwen at the top of the Betway Premier League table with a brilliant 7-4 win over Kim Huybrechts in Belfast on Thursday, as the Dutchman hit back to draw with Adrian Lewis at the Odyssey Arena.

Chisnall maintained his unbeaten start to the season with a sensational display as he matched Huybrechts' 107 average but produced the key finishes at the vital time.
After Huybrechts won the opening, Chisnall landed seven perfect darts - including two 180s - as he levelled before adding another maximum as he finished 90 on the bull to break, and a double top finish moved him 3-1 up. Huybrechts won two of the next three to cut the gap only for an 11-darter to edge Chisnall 5-3 up - but the Belgian then almost produced a moment of history in the ninth leg, missing double 12 for a nine-darter. He returned to finish double four to cut the gap to 5-4, but Chisnall landed scores of 180 and 174 as he denied his rival the chance to level with a 13-darter before sealing an impressive win with a sixth maximum in an 11-dart finish.

"I'm really happy with that," said Chisnall. "I played well there, that's probably the best I've ever played in the Premier League and we both performed tonight. In the last few weeks I've not been hitting the treble 20s but I've been finishing well, and it all combined tonight. I'm happy to still be unbeaten and it would have been great for everyone watching." 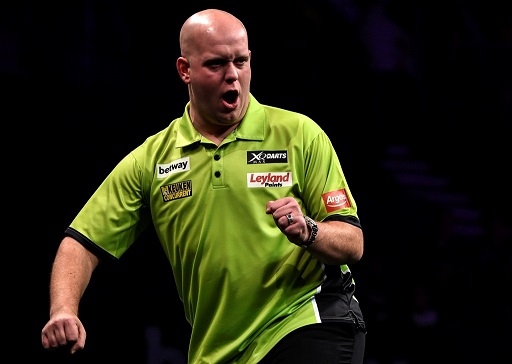 Van Gerwen also sits on seven points in the league table after he maintained his unbeaten start to the season, although his winning run was ended as he battled back from 5-2 down to draw with Adrian Lewis.
Despite an early 11-darter from the world number one, Lewis took out finishes of 112, 70 in back-to-back legs and 82 as he took a three-leg advantage at 5-2. Van Gerwen followed up an 82 finish of his own with a brilliant ten-darter as he pulled back to 5-4, and though Lewis sealed a point with a 14-darter, the Dutch ace took the game's final two legs in 14 and 13 darts to share the spoils.

Van Gerwen ended the contest with a three-dart average of 106 to Lewis' 98, and said: "After being 5-2 down then you're happy with a point, but I think I was the better player. Adrian showed his class and finished really well, and he showed why he's a player in the world's top four, but I fought back really well and have something to build on."
The draw moves Lewis onto four league points as he was forced to settle for a point for a second successive week, and he said: "I'm disappointed not to take the win but his 80 finish was a massive shot. To get into the lead like I did at 5-2 it feels like a defeat, but I've got to take it on the chin and move on to next week. I'm happy with my form but I lost a lot of rhythm. I've started to slow down a bit on my doubles and that came into my scoring as well, so I've got to get the right balance." 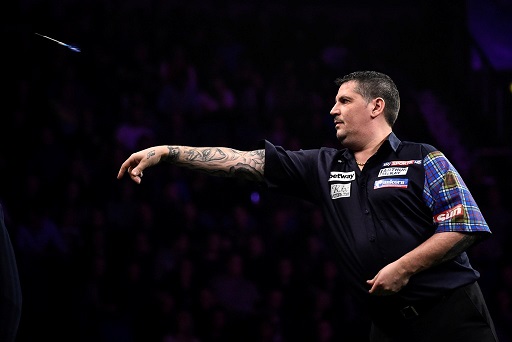 World Champion Gary Anderson sits third in the league table after picking up his third victory of the season with a 7-4 comeback win over James Wade in a battle of former Premier League champions.
Wade raced into a 2-0 lead and also led 3-1 before Anderson turned the game on its head with finishes of 67, for a 14-darter, and 11-dart leg and double 11 to take the lead. The left-hander levelled in the eighth leg, but Anderson fired in a superb 13-darter, broke with a 71 finish on double ten before sealing victory by following a 174 score with a 92 finish for a 14-dart leg.

"It felt a bit scrappy but I'm glad I got the win and to win three of the first four then is definitely a good start," said Anderson. "I started hitting my doubles well but James didn't finish as well as he usually does. Last week against Michael was a game which I shouldn't have lost, and this was nip and tuck so I'm happy to pinch it." 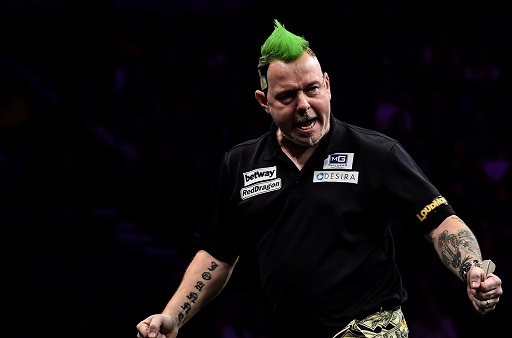 Phil Taylor sits in fourth place on five points after he drew with Peter Wright, who took out a 14-dart finish in the deciding leg of their contest to claim his second point of the season.
Wright landed an 11-darter and finished 64 for a break of throw as he took a 3-2 lead, with Taylor regaining the advantage but paying for four missed doubles to break in the eight as his rival levelled at four-all. Neither was able to find a break in the final four legs, as Wright picked up a draw for the second successive week. 
"Phil's scoring was great in the first half of the match but I battled on, like I did last week against Raymond van Barneveld, and held onto his coat-tails," said Wright. "I had to work hard for that because I was playing the best player on the planet, so it's a good point for me."
Taylor said: "I'm bit annoyed with myself because I chucked a point away, and that could be precious towards the end of the year. I had my chances and I didn't take them, and it was a struggle. I missed some doubles and Peter took advantage of that - he finished quite well - but it's up to me to rectify that. Peter took his chances and hit his doubles, and that's what the top players are doing when they get chance, but I'll get better over the next few months." 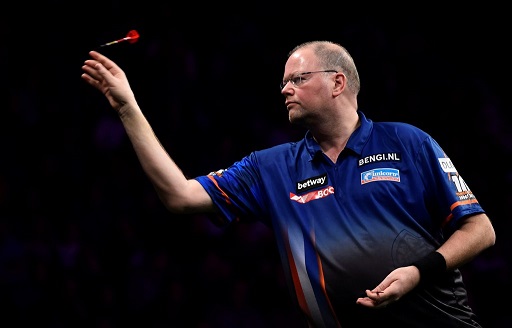 The night's other game saw reigning champion Raymond van Barneveld claim a 7-4 win over Stephen Bunting, who battled back from 4-0 down against the Dutchman only to slip to a third loss of his debut season.
Van Barneveld capitalised on his opponent's early missed doubles to win the opening four legs without reply, and he also led 5-1 before Bunting finished double four, double nine and double six to cut the gap to one leg. The St Helens ace, though, missed one dart at tops to level in the tenth leg as van Barneveld posted double ten to edge 6-4 up before he took out 96 for a 14-darter in the next to claim his first win of the season.

"I'm pleased to get the win because I've blown my chances in other games but I took them tonight," said van Barneveld. "Stephen missed an amazing amount of doubles and let me in, and I'm happy with this. Every week's a battle because there are so many great players. The averages don't mean anything - it's about hitting doubles and winning."