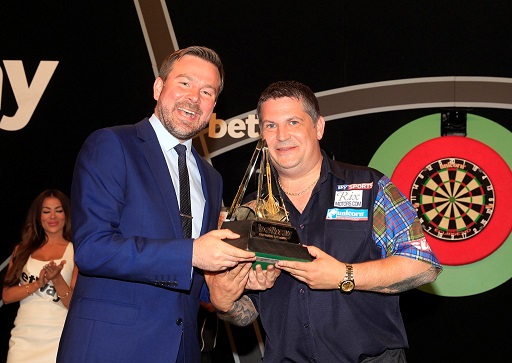 GARY ANDERSON was crowned as the 2015 Betway Premier League champion as he defeated Dave Chisnall and then Michael van Gerwen on an amazing night of Play-Offs action at The O2 in London.
The World Champion added the 200,000 pound first prize in the Betway Premier League to his ever-growing roll of honour as he recaptured the title he previously won in 2011 with two gritty, dramatic performances in front of 11,000 fans.

Anderson stared defeat in the face in his semi-final against Chisnall, who missed three match darts in a deciding leg before the Scot took out a brilliant 116 checkout to claim the narrowest of 10-9 victories.
He then produced a clinical display against world number one van Gerwen as an 11-7 triumph gave him the prestigious title following 16 weeks of action across the UK and Ireland. 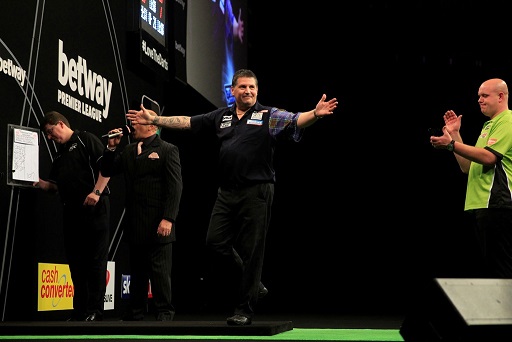 "It's four years since I had my hands on this trophy and it means a lot," said Anderson, who becomes only the second player - behind Phil Taylor - to follow a World Championship win with the Premier League title. Dave's had a fantastic season and has been the best player in the league alongside Michael van Gerwen, who is hot property at the moment and won't lose too many tournaments, but he did tonight. Michael plays my kind of game, he's a fast player, he is a big scorer and finisher and he's one of the best in the world, and those are the games I like to play in. The 116 was a big shot to hit to win that semi-final. Chizzy had those three darts at 32 and missed and I took out the 116. It's usually me who misses the darts at a double and someone takes out a big shot to beat me but I'm taking my chances now, and it was the same in the final. It's a tough season and the standard now is amazing; it's so hard nowadays, so it's special to win this."

Anderson's semi-final had proven a tight affair, with the opening six legs shared before Chisnall - aided by a 152 checkout for a 12-darter, a 14-darter to break throw and a 13-dart leg - moved 6-3 up in the blink of an eye. He also held a 7-4 advantage before Anderson hit back-to-back 14-darters in a three-leg burst of his own to level - only to then miss tops to break throw as Chisnall edged back ahead at 8-7. Anderson finished tops to level before the duo traded 68 checkouts to send the game into a deciding leg, with Chisnall opening with a 180 only to miss three match darts at double 16, eight and four to allow the Scot in for a 116 checkout as he sneaked the victory.

The second semi-final proved equally dramatic as van Gerwen ended Raymond van Barneveld's proud defence of the title with a 10-8 triumph in a repeat of the 2014 final.
Van Gerwen landed a 121 finish for a 12-darter as the pair shared their opening eight legs before van Barneveld took three in a row to pull clear - missing double 12 for a nine-dart finish as he took out a ten-darter before then finishing 110 for a 7-4 cushion. The world number one, though, hit back in amazing fashion by taking out a 127 finish for a 12-darter and legs of 11, 15, 11 and 15 darts to suddenly turn the game on its head and lead 9-7. Van Barneveld landed his seventh 180 of the contest as he hit back in the next, but van Gerwen was first to a double in leg 18 as he fired in double four for the win. 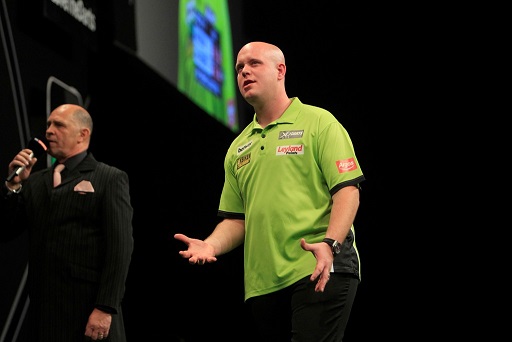 The final proved an equally dramatic affair, with van Gerwen bursting into a 2-0 lead - despite back-to-back 180s from Anderson in leg two - before the World Champion kick-started his challenge with finishes of 64 and double five to level. He then moved ahead with an 11-darter, and though van Gerwen finished 121 to level, the Scot then took the next four legs to move 7-3 up, punishing seven missed doubles from the Dutchman in one leg and two in another. Van Gerwen hit back with an 11-darter before further misses allowed Anderson back for an 8-5 cushion, but two of the next three legs went to the 2013 Premier League champion as he pulled back to 9-7. Anderson, though, took out a key 96 to halt his rival's charge before finishing 64 on tops to complete the triumph.

Van Gerwen said: "Gary played well and he's a fantastic player, but tonight Dave missed three match darts against him and I missed about five legs on my doubles so the luck was on his side tonight, and sometimes you need to have that. Gary's been playing really well so you can't afford to miss doubles against him. I'll have to practice on my doubles because I gave four or five legs away that I didn't need to lose, and that's why it hurts so much. This is one of the toughest titles to win and I know what it's like to win this, but this is twice in a row now I've lost in the final."

Chisnall had finished second in the league table in only his second season of the Betway Premier League, but was left to rue his three missed chances to win through to the final. "I'm proud of my season but I'm so disappointed to lose in the semis," said Chisnall. "I should have won but that's how it goes. I thought that the last three darts at doubles were going to go in and they didn't, and Gary's 116 was brilliant. I didn't think he was going to hit it, but fair play to him. There was probably a little bit of pressure on my at the end there and I'm not used to that, but Gary is and that's why he's World Champion. It's great experience and I'm happy with how I played all season. I know what I can do, and it's just about doing it - and tonight I think I was unlucky but I'll move on from here." 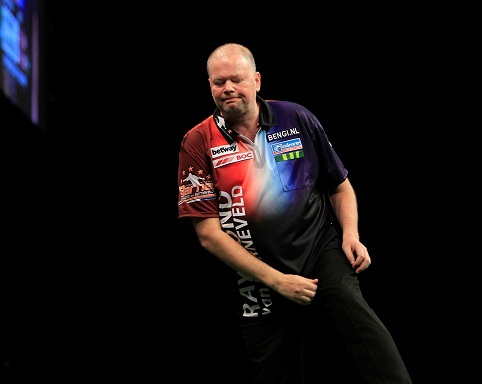 Reigning champion van Barneveld had enjoyed an eight-game unbeaten run as went from narrowly avoiding elimination on Judgement Night to claiming fourth place in the final league table. However, the Dutchman was left distraught after seeing van Gerwen surge to victory in their semi-final. "It's all about winning," said the five-time World Champion. "Last year was my year and I was really happy with the Premier League title. I knew I'd have to play really well against Michael and at 7-4 I don't think I played that badly but Michael played better. He was just to good but I gave it my all."